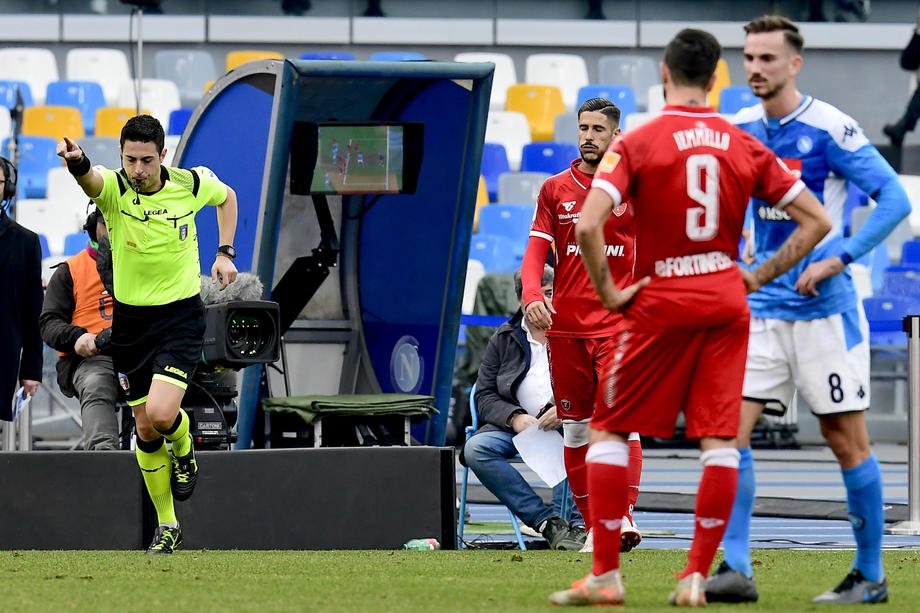 Referee Luca Massimi awards a penalty to Napoli after checking the VAR.

The Italian Football Federation has notified FIFA of its “willingness to experiment” with a VAR challenge process.

Following requests from a number of Serie A clubs, the country’s governing body released a statement in which it said it was open to trialling a system whereby teams could request an on-field review during matches.

“Italy was one of the first countries in the world to experiment with technology in football,” read the FIGC statement.

“The adoption of VAR by IFAB (the International Football Association Board) was preceded by an offline test period in the Italian top tier and generated exceptional results, contributing significantly to the implementation of the definitive protocol.

“Animated by the same desire to innovate and with the same spirit of service of the time, the FIGC has interpreted the requests received in recent weeks by numerous Serie A clubs and has informally anticipated FIFA its willingness to experiment with the use of the challenge (the call for an on-field review by the teams), in the time and manner that IFAB eventually establishes.

“The FIGC is convinced that, by continuing the path already undertaken, football can be brought into a dimension ever closer to the millions of fans, without affecting the referee’s authority, but rather by providing him with concrete tools.”

FIGC president Gabriele Gravina has also urged referees to “intensify” the use of the on-field review “to avoid fuelling controversies that affect the image of our championship, which is preparing to enter the crucial phase of the season”.

News podcast: How safe are journalists and their sources from interference