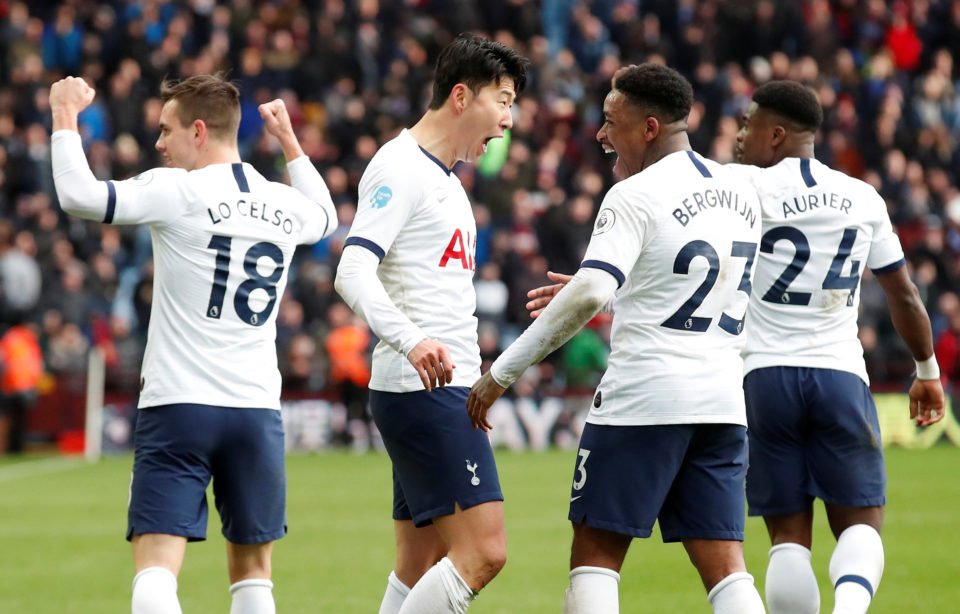 Son Heung-min struck a stoppage-time winner after a dreadful error from Bjorn Engels as Tottenham Hotspur won 3-2 at Aston Villa on Sunday to move up to fifth in the Premier League.

In an enthralling match, Villa went ahead in the ninth minute when Spurs defender Toby Alderweireld turned an Anwar El Ghazi’s cross into his own net.

But the Belgian centre half made amends for that mistake when he fired Tottenham back on level terms with a superb shot on the turn from inside the box.

VAR intervened to award the visitors a penalty after reviewing a challenge on Steven Bergwijn by Villa defender Engels and ruling that he had brought down the Spurs forward.

Son’s weak penalty, after a stuttering approach run, was saved by Pepe Reina but the South Korean was quickest to react as he bundled home the loose ball to send Spurs in ahead at the break.

Then it was the turn of Engels to cancel out his error – the Belgian rising to meet a Jack Grealish corner and power in a header to make it 2-2.

Villa’s Spanish keeper Reina made three fine saves to deny the impressive Son but the South Korean was to strike the decisive blow in the final moments of the game.

Engels ended the match in despair as he mis-kicked a long ball forward and allowed Son to race clear and fire past Reina to take the three points.

“We were 1-0 down so we showed our character and we didn’t give up. I felt bad because I had a couple of chances to score but I got the winning goal which makes me very happy and I think the lads deserved the win,” said Son.

The defeat left Villa in 17th place, just a point above the relegation zone, but victory was a major boost for Spurs in their bid for Champions League qualification.

Spurs are a point behind fourth-placed Chelsea, who host Manchester United on Monday.

Fifth may be enough to secure Champions League football if second-placed Manchester City’s two-year ban from the competition is upheld.

The ban was imposed by UEFA on Friday after an investigation into alleged breaches of Financial Fair Play rules but the club are appealing the decision.

Substitute Alexandre Lacazette ended his goal drought as Arsenal secured their first Premier League win since New Year’s Day with a 4-0 victory over Newcastle United at the Emirates Stadium on Sunday.

Lacazette had gone nine games in all competitions without a goal before he found the target with a mis-hit shot in the final moments of the game.

The win moves Arsenal up to tenth position and will give them hope they can make a late push towards European qualification for next season.

After a goalless first half, Pierre-Emerick Aubameyang put the Gunners in front with a powerful header from a Nicolas Pepe cross.

Pepe himself added the second, from close range after good work from the impressive Bukayo Saka.

Newcastle had opportunities to get back in the game, with Allan Saint-Maximin hitting the post and Ciaran Clark missing a great chance from close range.

But Mesut Ozil put the game beyond the Magpies with his first goal of the season with a tap-in after a flowing Arsenal move involving 35 passes and touches from all 11 players — the most passes for any goal in the league this season.

Lacazette, left on the bench with youngster Eddie Nketiah, finished off a smart move for Mikel Arteta’s side, who recorded just their second win since the Spaniard took over at the club.

“We wanted to put draws into wins and the home form is going to be vital. It was a little bit slow and you can get frustrated but we started to manage the game better after 25 minutes, had a talk at halftime and improved in the second half,” said Arteta.

“In the final third we were poor in the first 25 minutes. The most important thing is the reaction of all the players and staff towards him (Alexandre Lacazette), the players, everybody really like him, he works so hard for the team,” he added.

The defeat ended an eight-game unbeaten run for Newcastle and left manager Steve Bruce surprised with their defending.

“I didn’t see that coming in the second half. We gave bad goals away which isn’t like us. We usually don’t give much away. When that fourth goal happens you think it wasn’t our day,” Bruce said.