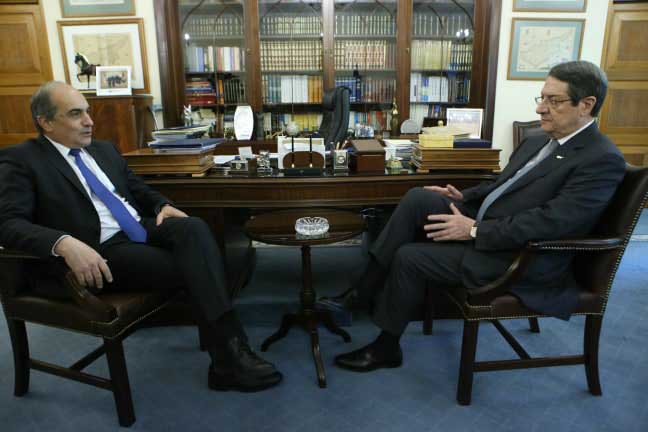 President Nicos Anastasiades intends to convene a meeting of political party leaders to discuss speeding up the reform process for the public service and local government.

The move was announced after a meeting he had Monday morning with House president Demetris Syllouris who pledged to do what he could to facilitate the government’s agenda for discussion and debate.

“It is up to the parties to decide whether they are in favour or against,” said Syllouris. He said he, as House president, would be willing to contribute to accelerating the debate through parliamentary scheduling. His meetings with the president would continue next week, he said.

“We have covered several topics today. The president informed me he would also convene a meeting of party leaders to see if a wider consensus could be achieved,” he added.

“They discussed ways of speeding up the debate and voting on the legislation,” he said, adding that Anastasiades had suggested convening a meeting of the party leaders.

“Political leaders will be expected to submit their proposals and express their views in order to create a positive climate and enable reform bills to pass by the largest possible majority,” said Kousios.

Asked what the point of the meeting was since the president had already met the party leaders separately to discuss the same topics, Kousios said: “The president has listened to the individual positions but considered it appropriate to have a broader meeting to exchange views all together and to have as much as possible unanimity,” he said.

Kousios said all of the party leaders have been positive on reforms but there were individual differences between each and it was decided it would be best that everyone put their cards on the table rather than engage in a back and forth process with each party leader.