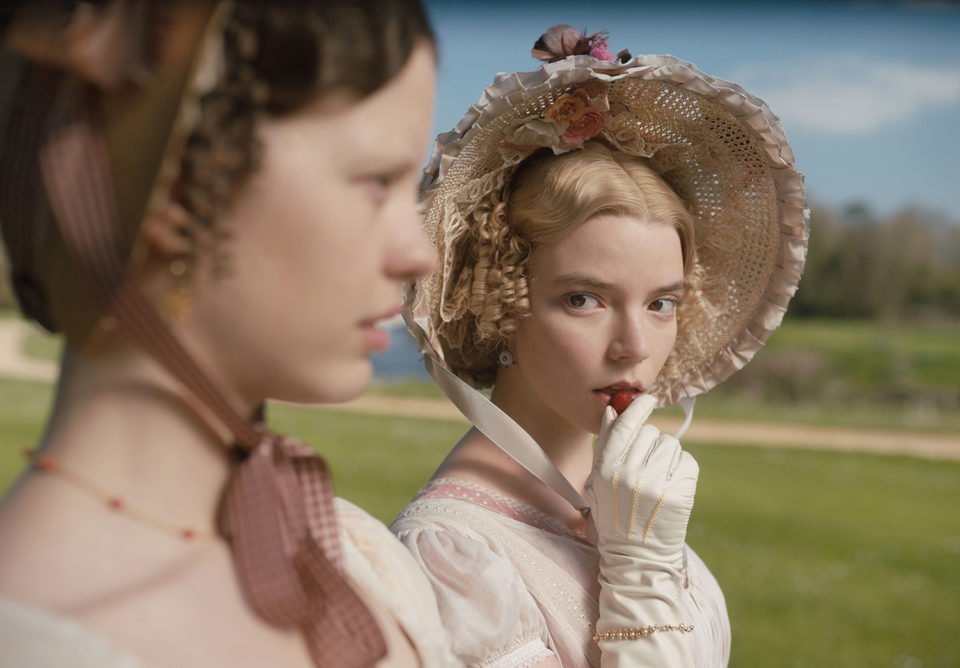 LONG considered to be Jane Austen’s funniest novel, Emma is no stranger to big screen adaptations.

But it rarely feels quite as fresh, youthful and vibrant as it does in the latest incarnation, with Anya Taylor-Joy leading an all-star British cast including Miranda Hart, Bill Nighy, Josh O’Connor and Mia Goth.

“We wanted to do something that was kind of genre-shifting and also very true to the wit that’s in the books,” the British actress, 23, says as she puts down her teacup.

“Sometimes, in period dramas, you get so held back with all the rigidity and the idea that everyone is so perfect all the time.

“They’re still people; they’re just wearing corsets, and people do ridiculous things, so we really leaned into that.

“The way that I saw Emma, she’s always living in her own movie and she’s kind of directing her own movie, so I brought that onto set.”

Gwyneth Paltrow, Kate Beckinsale and Romola Garai have all taken on the role of the spoilt matchmaker before, not to mention Alicia Silverstone in the modern re-telling, Clueless.

Taylor-Joy’s anti-hero is a restless queen bee and clever daddy’s girl, so consumed by boredom in her privileged life in a sleepy village that she meddles in others’ affairs to keep the heat off her.

“I have always loved slightly crazy people,” she says with a laugh, “who other people have a hard time trying to understand – because that’s where I feel comfortable.

“I am just like, ‘Yes, OK, I get where all this is coming from!’ And I’ve just been really lucky to get to play all of them.

“Emma is very different – I think all of my characters are very different but Emma is particularly on the other end of the spectrum in terms of how loud and how out there she is.

“She’s never really been told no, very spoilt. Everything is her doll’s house, and she can pull all of the strings and make everybody do what she wants.

“But it was just such a joy, I loved it. She’s my little monster.”

The sumptuous result is the directorial debut of the rock photographer and music video director Autumn de Wilde, who lingers on every meaningful look and gesture.

“She brings that rock sexiness to moments that you wouldn’t expect,” Taylor-Joy says.

“Any scene where hands are touching, it’s like the most exciting thing that you’ve ever experienced and it’s just two gloved hands touching.

“We approached any dance-y bits or big balls as a thriller. So it was always about which eyes are going where and who’s forming what opinion about what.”

“So coming together for the dances was very much the opportunity where you could be with your loved one or the one that you had feelings for, so that just amplifies all your feelings.

“Even just a flick or a touch of the hand is an explosion, so that restraint really creates – beneath the surface – a bubbling of emotions.”

But for all the coy smiles and intense eye contact, the film feels thoroughly modern in all its wedding cake confection.

“I think that it feels that way because they’re human,” de Wilde says.

“I think movies have told us the way people felt in that time period, but they still have to go to the bathroom, they still got hungry, they’re humans.

“Everything in the story relates to something I’ve experienced with a friend or a guy that I didn’t realise I’d been in love with the whole time – it’s really universal.”

It was a stroke of luck that Emma had long been her favourite book, even before she was asked to direct the film.

“It’s weird when you choose one story, I think, but I love Emma because she’s an anti-hero.

“We don’t get a lot of those ladies in movies and so the opportunity to make a movie about a girl that you sort of hate but can’t help but love was incredible, and I think Anya Taylor-Joy was with me from the beginning on that.

“I think the science of creating a human that behaves badly, but means well, was fascinating enough without all other things that we had to do.”

And it also turns out that her experience with bands (she’s made music videos for artists including Florence + The Machine, The Decemberists, The Raconteurs and Starcrawler) was crucial anthropological research.

“I do think that Emma is trapped in a small town, and being on a bus with a band, that we’re all trapped in, we all have to deal with our crap.

“I was like, ‘Sorry, do you know how much I’m responsible for looking like it was fun?’ Everyone is just trapped and bored and if you believe we were having a wild time, that’s because me and the band figured out how to make that happen.”