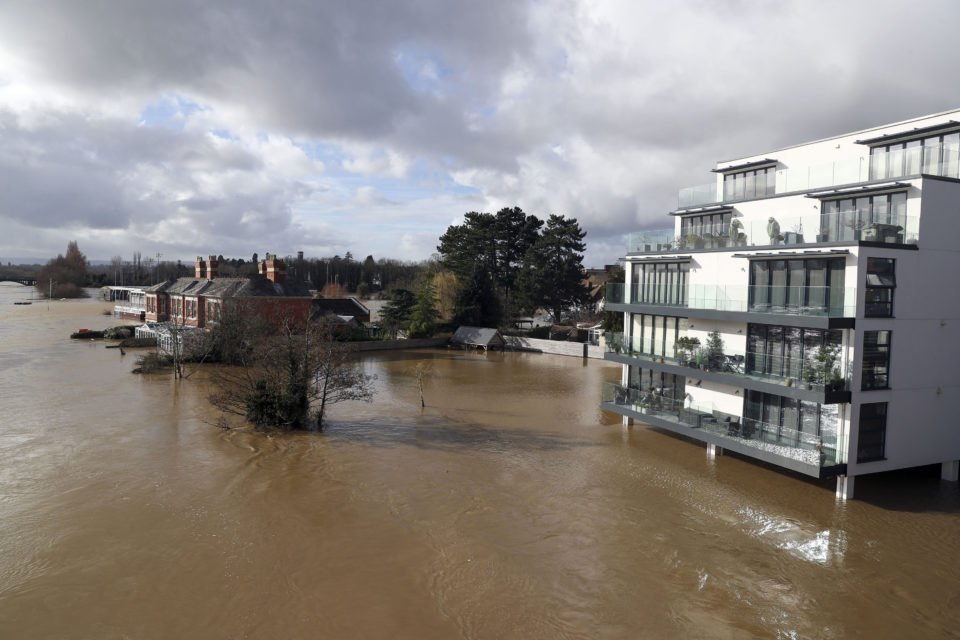 A flooded river Wye in Hereford, in the aftermath of Storm Dennis Steve Parsons/PA Wire

Severe flood warnings remain in place in the wake of Storm Dennis, with more rain expected to fall later this week.

The Environment Agency (EA) said downpours have swelled rivers to “exceptional” levels in parts of Britain.

Communities across the country are counting the cost of the weekend’s storm, which left hundreds of properties flooded.

Among the worst affected areas were South Wales, Herefordshire, Worcestershire and Shropshire where major incidents were declared.

A woman who was swept away by floodwater near Tenbury in Worcestershire on Sunday was found dead on Monday.

A statement from the family of Yvonne Booth, 55, from the Great Barr area of Birmingham, said: “Yvonne is a very much loved member of our family and we are all devastated by this news.

“We appreciate the continued support from the emergency services. We would like to ask for our privacy at this time.”

The Prime Minister resisted calls to chair a meeting of the Government’s emergency committee, Cobra, to tackle the flooding crisis, despite criticism from the Labour Party.

Luke Pollard, shadow environment secretary, said it was a “disgrace” that Boris Johnson had “refused” to visit affected communities.

West Mercia Police said residents in Upton upon Severn and Uckinghall, in Worcestershire, were advised to evacuate, with water levels expected to peak on Monday evening.

Emergency evacuations were carried out in Hereford, where the River Wye reached its highest level on record.

And homes in Monmouth were evacuated after Natural Resources Wales issued two severe “danger to life” flood warnings for the River Wye in the town, with the water level expected to peak between 3am and 7am on Tuesday.

On Monday night, seven severe flood warnings from the EA were in place in England for the River Trent at Burton upon Trent; the River Wye at Blackmarstone in Hereford, and at Hampton Bishop; the River Severn at Uckinghall and at New Street and Waterside in Upton upon Severn; and the River Lugg at Hampton Bishop.

Around 1,000 staff were on duty, with 5km of flood barriers deployed and 90 pumps in action, the EA said.

It warned the flood risk continues, with further heavy rain forecast in the north of England for Wednesday and Thursday, possibly falling on already flooded areas.

Met Office meteorologist Marco Petagna said Tuesday will bring a brief respite from the worst of the weather for most of the UK, with sunny spells and showers, but warned areas of Wales could see downpours.

“With the ground being so saturated it’s not going to help the situation,” he said.

The Met Office has issued two yellow weather warnings for snow and ice over parts of Scotland from 6pm on Monday, with further warnings of persistent rain in Wales for Wednesday and Thursday, which could be extended to the North West of England.