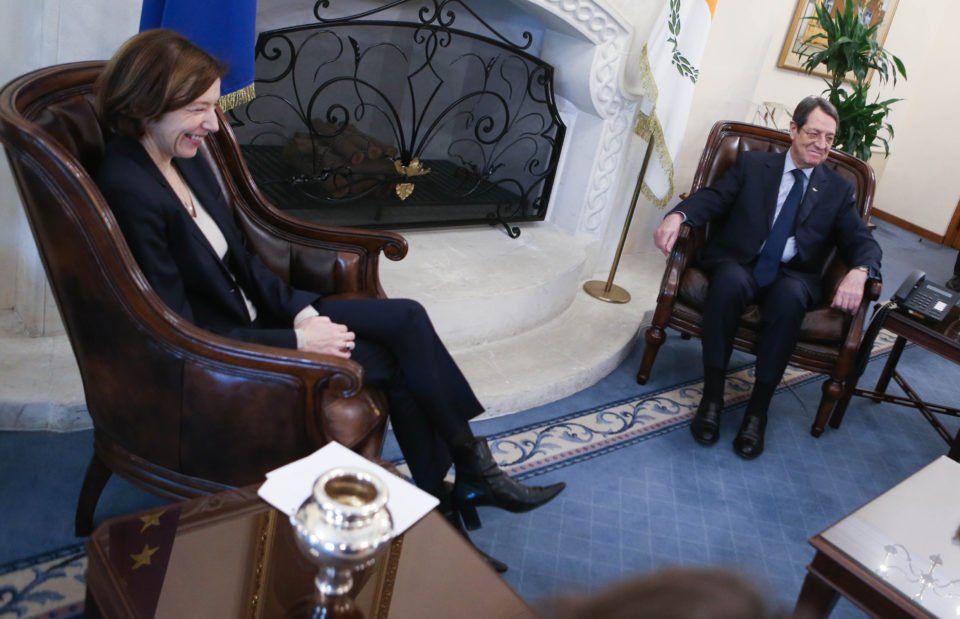 The Minister of the Armed Forces of France, Florence Parly with President Nicos Anastasiades

France assured Cyprus on Tuesday of its full solidarity in countering Turkey’s illegal activities in the island’s exclusive economic zone (EEZ) and would contribute decisively towards preserving international maritime law in the eastern Mediterranean.

The assurances of France’s solidarity came from the country’s Defence Minister Florence Parly who met on Tuesday morning with President Nicos Anastasiades and subsequently with Defence Minister Savvas Angelides, and after the publication of an interview with the Bloomberg news agency with the president who said France was the only country had taken an active role in the region.

He told Bloomberg that Turkey was taking advantage of worsening relations between Russia and Nato to increase its influence in the eastern Mediterranean and most other countries had failed to react.

“Turkey feels unrestrained given US efforts to keep the country in the western alliance,” Anastasiades said, adding that the international community has not acted to rein in President Tayyip Erdogan either in Syria, or on Libya, in Cyprus’ EEZ, nor in relation to the closed-off town of Varosha in Famagusta.

In statements following her meeting with him at the presidential palace, Parly said: “It was an opportunity to express our solidarity regarding Cyprus which is under strong pressure from an international perspective. France is a friend of Cyprus and I reiterated our solidarity. That was my main message,” she said.

Parly said this solidarity was manifested in many ways. “We have a strong bilateral cooperation with Cyprus. Cyprus welcomes regular port calls from our navy and we are very grateful for that, and it participates in the efficiency at the aircraft carrier strike group operation, and we also express our solidarity regarding, for instance, on what goes on in the EEZ.”

After her meeting with Angelides, Parly assured that France would contribute decisively towards maintaining international maritime law in the eastern Mediterranean.

Cyprus and France on Monday began their third joint military exercise off the island with forces from the National Guard and the crew of the French aircraft carrier Charles de Gaulle, which is in the region and is expected to dock in Limassol on Friday for five days. Parly headed to the vessel after her meetings with Cypriot officials in Nicosia on Tuesday before leaving the island.

It was announced after the meeting with Angelides that it had been decided that the French navy would continue to be present in the region, and that mechanisms for the participation of other countries in joint exercises would also be activated. This was to send a message to anyone creating conditions of instability in the region and violating international maritime law, which is covered by the UN Convention on the Law of the Sea, to which Turkey is not a signatory.

Parly and Angelides also reviewed bilateral cooperation and discussed military cooperation, expressing their mutual will to enhance it.

Deputy government spokesman Panayiotis Sentonas, described the meeting between Anastasiades and Parly as very important. “In addition to expressing the position of French authorities, there was also a debate on ways of strengthening bilateral cooperation, particularly in the defence sector,” he said. He said Anastasiades welcomed the level of cooperation between the two countries, but also thanked the French minister for the support of Paris “both in the efforts to find a solution to the Cyprus problem and for the defence cooperation”.

According to the French Ministry of Armed Forces on Monday, questions of maritime sovereignty would be at the heart of discussions in Cyprus.

Her visit to the Eastern Mediterranean is part of the naval air group currently taking part in Operation Chammal, the French contribution to the international coalition against Isis.
“By visiting the aircraft carrier, the Minister of the Armed Forces wishes to send a clear message: the fight against terrorism is France`s priority,” it said. “This visit will provide an opportunity to take stock of and discuss the prospects for the excellent and growing bilateral relationship between France and Cyprus,” it added.

In the early afternoon Parly joined the naval aviation group centred around the Charles de Gaulle. On board the aircraft carrier, after a presentation of the mission and numerous exchanges, Parly addressed the entire crew and reiterated to the sailors of the naval air group the importance of their participation in Operation Chammal.

The air and naval group is currently made up of the Charles de Gaulle, an air group composed of 20 Rafale and two Hawkeye aircraft, the frigates Chevalier Paul, Auvergne, Bretagne and Surcouf, the tanker Var and a nuclear attack submarine, which left Toulon on January 21 for the Foch mission, which will last three months. It is currently integrating an American and a Greek frigate.

Anastasiades, other government and military officials and members of the diplomatic corps are due to attend a formal reception to be held on Saturday aboard the  aircraft carrier.

Coronavirus: An enforced stay in the mountains

Oil and gas companies on the retreat