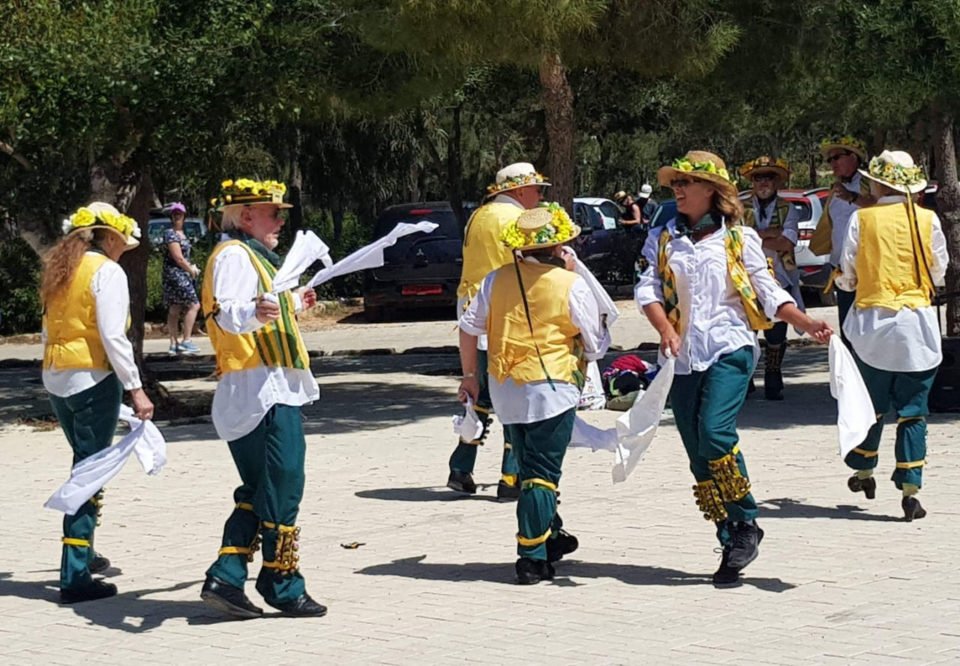 Cyprus Morris held its first meeting in November 2008. It’s the only Morris team on the island but now its future is under threat due to old age and low membership.

“We’re mainly made up of a retired expat community,” said Squire of the group Graham Spencer “and so ill-health and members returning to the UK has had an impact on our numbers. We’re looking to increase our membership. We welcome people of all ages and nationalities. You don’t have to be English to Morris dance.”

Morris dancing is energetic and many of the dances require eight people. Cyprus Morris only has nine members at present, with a combined age of just over 540 years and some of those are only on the island for part of the year they are a bit stretched.

Six of the existing team have been with Cyprus Morris for eleven years and despite their small number the group continues to meet in the village hall in Kivides, Limassol, the central point for its members, between Larnaca and Paphos, for weekly practices.

Like all international teams, Cyprus Morris like to keep alive the tradition of dancing on St George’s Day and May Day. St George’s Day is particularly important to Cyprus Morris as St George is the patron saint of both England and Cyprus. On this day the group dresses in their vibrant bells, rag jackets and top hats. They parade and dance through the streets of Limassol and Paphos, providing an entertaining spectacle.

Graham and Sue Spencer founded Cyprus Morris after meeting other enthusiasts by chance at a folk club meeting in Limassol. “We started with just six people,” said Graham, “with advertising, our numbers grew to 19 full members and we also acquired a couple of musicians to accompany us.” Their first performance, at the Malcom Cat Sanctuary, generated much, an increase in numbers and the ability to support more charities. Displays include tunes of the stick clashing Border dances, and the Long Sword dance originating from Yorkshire.

Squire Graham explains the term means he is the leader of the dance and will ‘call’ it. He began Morris dancing at the age of 19 and over the years has been a member of groups in Stratford, and Solihull, and will still dance with a group in Birmingham when visiting.

The traditional English folk dance is accompanied by music, and the dancers’ have bells tied around their shins. The Cyprus Morris dancers wear costumes heavy on yellow and green to reflect the colours of the Cyprus flag and perform dances from four of Morris’ six styles.

Morris dancing has been around for centuries and it’s thought its name derived from versions such as Morisk dance, moreys daunce and morisse daunce. The earliest known and surviving English written mention of Morris dance is dated 1448 and records the payment of seven shillings to Morris dancers by Goldsmiths’ Company in London.

And it’s not just in Cyprus that Morris dancing has fallen in and out of approval. It was popular from the 1500s, and in the 1600s William Kemp, a Shakespearian actor, danced from London to Norwich, writing about it in his book Kemps Nine Daies Wonder. The social changes during and after the Industrial Revolution, caused a demise in Morris dancing but in the 20th century a group of folklorists revived the custom which really flourished in the 1950s and 60s.

Women dancers were frowned upon at the time by those who believed it should only be practiced only by men. That notion is disproved by the written evidence of women dancing the Morris dance in the 1600s by Will Kemp.

Today, each body accepts male, female and mixed teams. They provide support, advice, teaching sessions and dancing opportunities to their members. The Morris dancing tradition has spread throughout the world with the expat community. There are reportedly 150 teams in the USA alone and teams in Australia, Canada, New Zealand and Hong Kong.

The three Morris organisations currently know of only two remaining Morris sides in the Mediterranean; Cyprus Morris and Terri Horvath Morris in Alicante.

CyBC journalist says state stripped her of her dignity