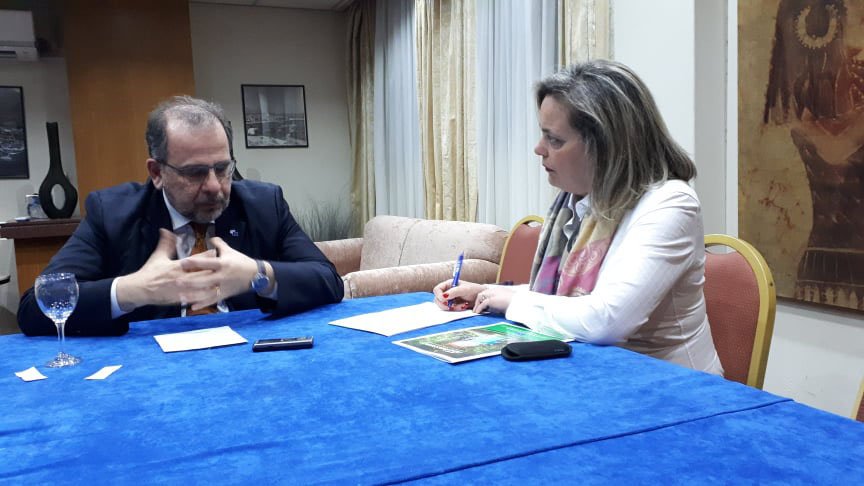 The only way forward in Cyprus is to come up with a new form of dialogue, European Economic and Social Committee President Luca Jahier has said, stressing the importance of fostering the efforts of civil society to prepare the ground for a solution.

Cyprus was the last stop recently in Jahier’s tour “Peace and Borders in Europe” after Belfast, Sopron and Berlin. In an interview with CNA and referring to his decision to raise awareness about the challenge of peace and borders, he said: “Borders still divide and still create not only physical division but also a division in the mindset.”

They also have a huge economic and social impact.

Referring in particular to the division of Cyprus, he added: “It is a key matter of concern and unfortunately without a clear roadmap for concluding in a positive way, it is very complex.”

The idea, Jahier said “is not only to say that borders and division matter but also that the only way to go is to create a new way of understanding between the communities, to invent a new form of dialogue, to continue to work to repair, to reconciliate what has been divided, to look what are the key common interests on which bridges can be built.”

To that extent he refers to the role of the civil society, which he says, in the other places he has visited, played “a major role in building bridges when the walls were existing but also in finding creative ways to break the walls and to prepare society to take the risk.”

Asked to what extent the civil society can play a role in practical terms in a process which is largely political, he said that from what he has seen and heard “there are still initiatives that could be supported and improved on.”

Jahier gave the example of existing forms of dialogue between employers organisations and trade union organisations from both communities.

“I think that this space of cooperation and understanding should be further developed and trust made more evident and in certain cases perhaps pushed to take some joint and common initiatives in an effort to develop a response to concrete problems,” he says. It could be, he said, the defence of workers, the development of prospects for small and medium enterprises in the city of Nicosia, where 25 per cent of the island’s population is concentrated.

He also refers to meetings he had with organisations from both sides working to relaunch the idea of a reunified island and highlights the “enormous importance” of the cultural sector. The cooperation between the two communities is already concrete in this sector, he says, adding that it could be further improved on, more supported, more developed to build up trust, confidence and mutual understanding. He also speaks of the positive peacebuilding initiative with the religious leaders of Cyprus.

According to the European official, “building up the argument for reunification in the sectors of social, economic and civil life can help also to create a dynamic that looks to the new opportunities for being together or to find solutions together instead of being divided.”

In a complex and blocked situation, Jahier notes, “the more you invest in what unifies and in creating bridges and trust, the more, you at least prevent the situation from deteriorating a little more and perhaps you create also the opportunity to generate a positive force for a possible innovative solution.”

Replying to a question about what he would take away from his Cyprus visit he refers to immigration, pointing out that there is a need to raise awareness in the European space about it and get help.

I think at the European level at least in the Brussels bubble, he says, there is no awareness that this country is supporting the highest percentage of migrants and refugees as a percentage of its population. There is a need to raise the issue that “this particular situation should be considered at the same level as Greece, Italy, Spain and Malta and not forgotten,” he notes, adding that more solidarity and more engagement must be generated from Europe on this.

On the other hand, he continues, “I believe that Cyprus has historically been a cross-road between Europe and the Middle East and today we need more than ever to have some key point of opening dialogue and opening bridges in this world.”