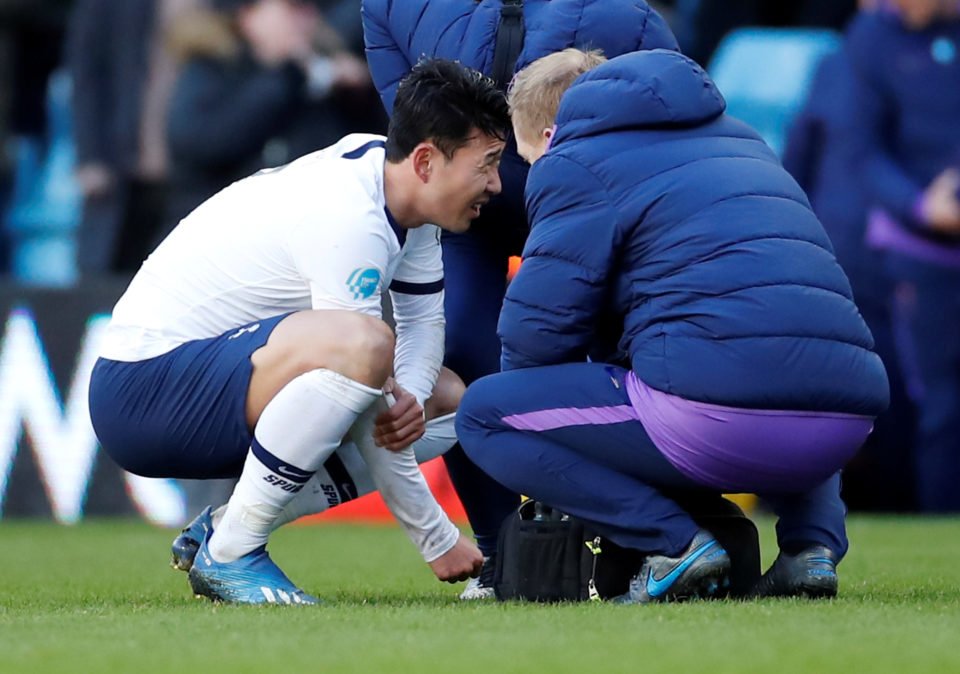 Tottenham face the prospect of being without Son Heung-min for several weeks after the forward fractured his right arm in Sunday’s win over Aston Villa, the club have announced.

Son suffered the injury in a first-minute challenge with Villa’s Ezri Konsa and though he completed the 90 minutes and scored twice, he now faces surgery on the injury and a potential long-term lay-off.

A statement on the club’s website read: “Son Heung-min is to undergo surgery this week after sustaining a fracture to his right arm.

“The South Korea international suffered the injury during our win against Aston Villa on Sunday.

“Following surgery, our medical staff shall be reviewing management options for Son’s rehabilitation with the player expected to be sidelined for a number of weeks.”

Son has been deputising as the main frontman since Kane’s injury but with both players now missing, Lucas Moura or untested youngster Troy Parrott may be required to step in.

Manager Jose Mourinho said last month that Parrott is “not ready at all” to fill the void as the main striker, though the Republic of Ireland Under-21 international could be considered for some playing time.

In his pre-match press conference for Wednesday’s Champions League clash with Leipzig, Mourinho said of Son: “We are going to miss him.

“The club wrote a nice statement. If I was the one to write the statement I would write different. We miss him.

“The situation couldn’t be worse. That is obvious. There is nothing we can do.

Asked if he would have to try a different style of play with Son now absent as well as Kane, Mourinho replied: “Yes, it has to be.

“When we arrived we were on the minus-12th floor, we got on the stairs and we started climbing. But immediately in the beginning, the stairs broke so we were in trouble and we were finding a way to try to get up.

“We found a way, with a lot of work and a lot of effort and we started going and going and going, and when we arrive on the fourth floor, which was where we wanted to arrive, somebody came and took the stairs away.

“So now we are in trouble. Now we have two options.

“One is to give up and we will fall and normally die – because it’s the fourth floor. Another way is to fight with what we have, no stairs but arms. So, we’re going to be on that balcony fighting with everything that we have.”

Harry Winks reiterated his boss’ disappointment that Spurs would be without Son.

The 24-year-old midfielder said: “It is a massive blow for us. He is a top player.

“He brings more than just his goals to the team. His work-rate and energy and his experience as well. He’s doing so well.

“It’s a massive loss for us. But we’ve got good enough players in the squad as well who can fit in and hopefully we can still score enough goals.”

Despite the loss of Son, Winks backed Spurs to rally as a group with focus on their European tie against the high-flying Bundesliga side.

He added: “This is probably the first time (since I’ve been here) where it’s been this, kind of bare as such.

“We’ve always managed to find ways of getting results and scoring goals elsewhere and we’ve got more than enough quality and goals in the side already.

“We’ve got (Erik) Lamela coming back from injury as well, which is going to be key for us, so he can obviously contribute as well.

“As much as it’s a massive loss to us, it’s something that we can’t focus and dwell on too much because we’ve got a such a big game tomorrow.”