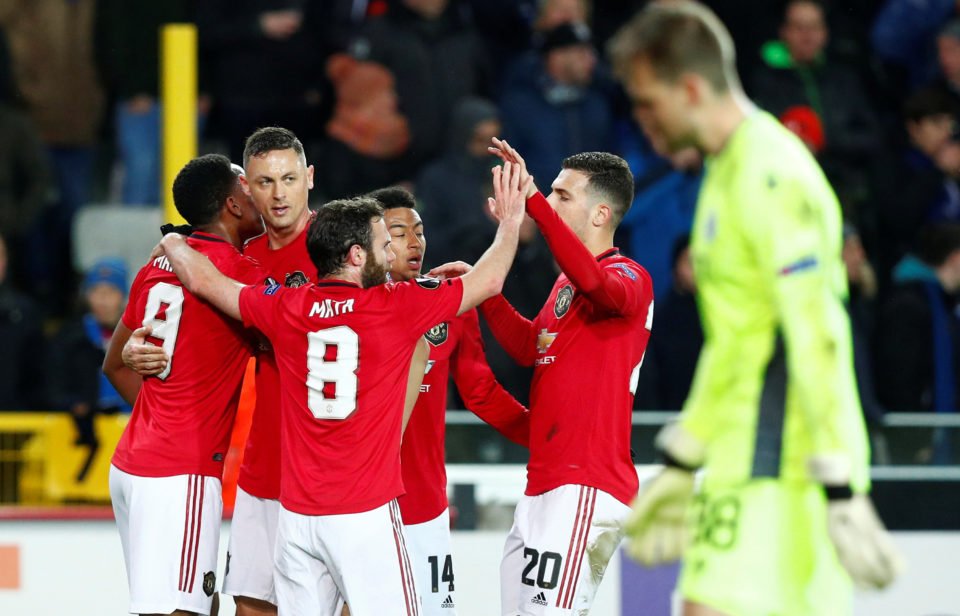 After Monday’s impressive, and much-needed, Premier League win at top-four rivals Chelsea, Solskjaer plumped for six changes in Belgium for the first leg of this round of 32 tie.

United and Club Brugge will resume battle at Old Trafford with the score poised at 1-1 after Martial raced through to level on a night which started with Emmanuel Dennis catching Sergio Romero in no man’s land.

Club Brugge looked well placed to secure the “miracle” win their head coach Philippe Clement spoke of in the build-up, so he must have been tearing his hair out when they shot themselves in the foot in the 36th minute.

From a throw-in that Harry Maguire had comically given away, Brandon Mechele’s bizarre decision to let the ball bounce was gobbled up Martial and the striker darted through to level coolly.

The France international, who opened the scoring at Stamford Bridge on Monday, also hit the post as United attempted to end a shocking first half with an undeserved lead.

The second period was a more even affair at the tired Jan Breydelstadion, with both sides having chances to take a lead into next week’s second leg in Manchester.

Solskjaer will be relieved to have emerged with an away goal and draw given how Club Brugge, unbeaten in two months, threatened from the outset.

Dennis was quick to cause problems and Victor Lindelof had to put his head where it hurts before Nemanja Matic helped clear in the opening minutes.

Romero’s poor decision making in the build-up to that chance did not help and the United goalkeeper’s evening got worse after Andreas Pereira saw an attempt saved at the other end.

Mignolet’s quick goal-kick sent Dennis scampering behind the United backline. Diogo Dalot and Brandon Williams failed to deal with the 22-year-old, who had the presence of mind to clip the ball over out-of-position Romero.

The Jan Breydelstadion rocked as much as United’s defence over the coming minutes, with the Blauw-Zwart running rings around the visitors as Mats Rits’ attempt deflected wide.

Dennis tried to gee up the crowd after the chance, just as he did when denied by Romero at the near post.

United were struggling to pass, never mind create a clear-cut chance, epitomised by Maguire’s incredibly poor five-yard attempt that found the advertising hoarding rather than team-mate Lindelof just inside his own half.

But that Club Brugge throw-in provided United with an implausible equaliser.

Mechele’s senseless decision to allow Maxim De Cuyper’s throw across his body was snapped up by Martial, whose pace and strength saw him race through before coolly curling a low shot past Mignolet.

The leveller gave United renewed energy and Martial somehow made enough room to get away a shot from just outside the box that rattled the near post as half-time approached.

Solskjaer’s side continued in the ascendancy immediately after the break and Diogo Dalot’s cross was nearly directed home by Jesse Lingard, while Martial’s surprise attempt to lay off to Juan Mata rather than shoot then let off Club Brugge.

The home side settled after that frantic start and Romero denied Dennis at his near post, before increasingly irate supporters threw drinks at the linesman.

Pereira and Ruud Vormer had attempts at either end as play became stretched, with Odion Ighalo introduced in a bid to snatch a late winner.

Mata was denied before the offside flag was raised as the match ended edgily, with Charles De Ketelaere close to finding a Club Brugge winner at the death.