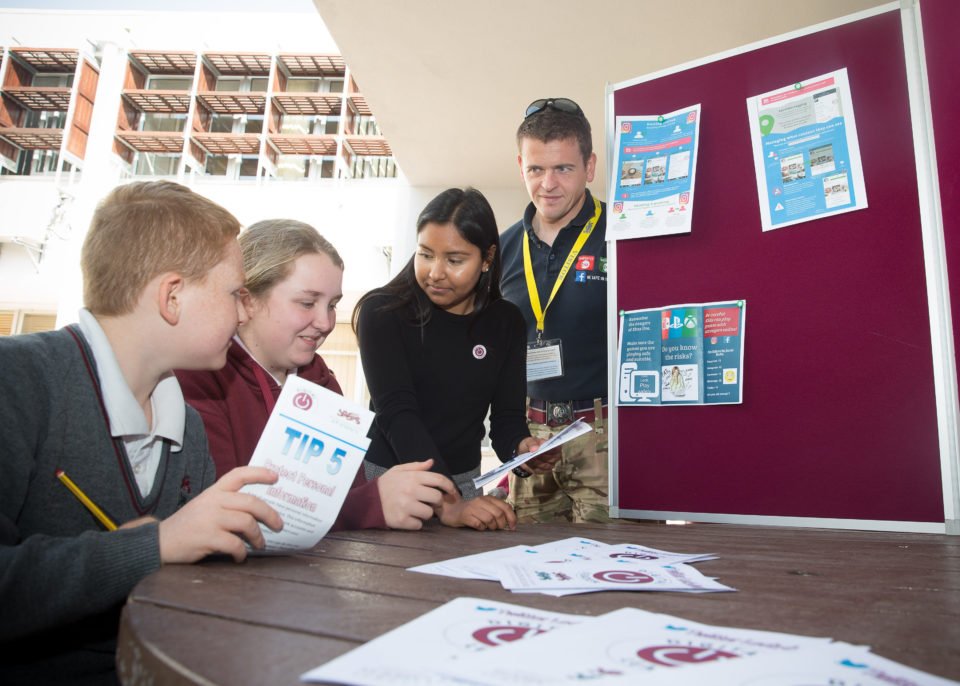 The event, which is gathering momentum all over the world, with more countries taking part this year than ever before, is based around the theme of ‘Together for a better internet’.

Statistics released on Safer Internet Day, show children’s identities are being shaped online but they also highlighted that many young people feel pressure to conform to an unrealistic image.

An overwhelming majority of young internet users also expressed concern about ‘haters’ – people that target individuals over their identity and views.

Within the Bases, the schools actively promote the Digital Leaders initiative, which is a group of students tasked with raising awareness about internet safety.

This year, for the third year in succession, students handed out leaflets at school and offered advice on how to stay safe online.

The campaign, which was supported by the Cyprus Joint Security Unit’s, Be Safe on Island team, celebrates the benefits of the internet but also promotes e-safety.

Corporal Gary Davis-Blair, who is part of that team, feels Safer Internet Day is a key campaign targeting every member of the community, with the Digital Leaders at the forefront.

He said: “The day is really important because it encourages people from every part of our community to join together and engage in an open dialogue about on-line safety.

“The Digital Leaders are key to the success for us here in BFC because it empowers them to take responsibility to educate their schoolmates, parents and teachers about staying safe online.

“This year, like we have done previously, it started with a school assembly, during which the Digital Leaders did a PowerPoint presentation to highlight some key areas surrounding internet safety.”

And whilst the presentation to the students proved highly-successful, Cpl Davis-Blair revealed the Digital Leaders influence was also effective when they went home and spoke to their families.

He explained: “If our team (BSOI) conduct an education seminar to tell people about internet safety, we often have to interrupt their busy days but with young adults and children, they go home and speak to their families about it and they can have an enormous impact on them.

“Children today are often more knowledgeable about online safety because they use phones, tablets and computers more than their parents. The Digital Leaders initiative allows us to tap into that, so they go home and pass on what they know to their parents.”

Be Safe on Island was formed nearly four years ago to recognise the importance of promoting positive on-line behaviours and since then, the team has worked with communities across the SBAs and surrounding areas, to provide the latest scam warnings, online safety advice and social media privacy information.

Financial donations given to local communities