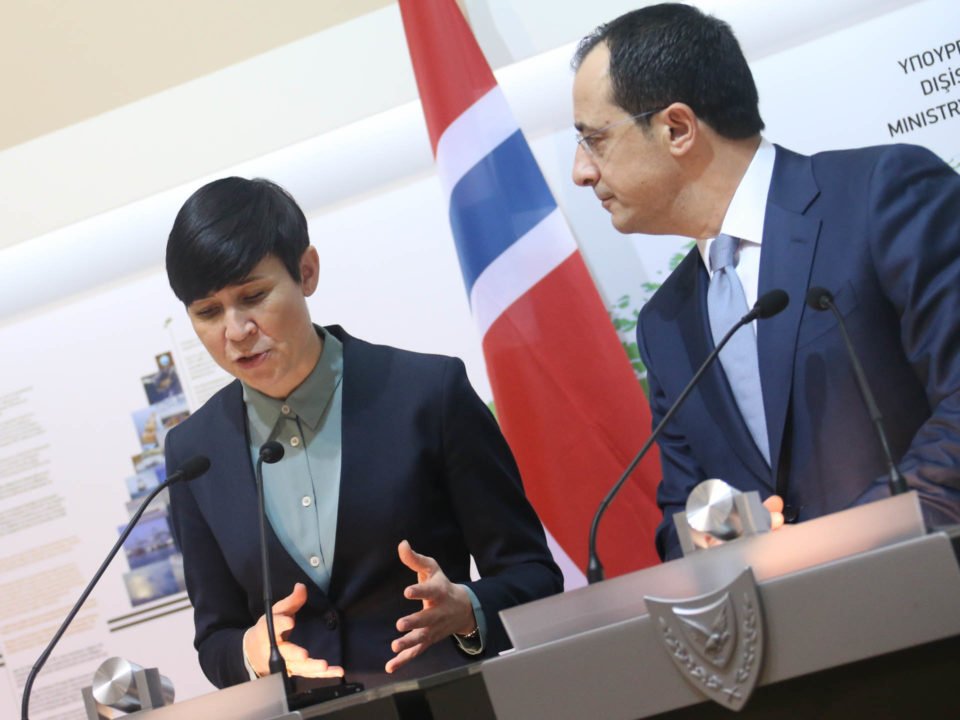 Cyprus and Norway are preparing to sign a Memorandum of Understanding (MoU) on energy issues, that will contain provisions for the exchange of expertise in relation to the national hydrocarbons fund among other issues, it emerged on Friday.

The news emerged as Norway’s Foreign Minister Ine Marie Eriksen Soreide was in Cyprus for a meeting with her Cypriot counterpart Nicos Christodoulides.

The MoU will be signed at Ministerial level once the relevant preparation work is completed.
Also, according to diplomatic sources, Oslo recently discouraged a Norwegian energy company form entering into cooperation with TPAO, the Turkish Petroleum Corporation, CNA reported.
After it was approached by TPAO to cooperate over drilling issues, the company contacted Norway’s foreign ministry, which in turn appeared negative to the prospect of the two companies cooperating.

According to Soreide on Friday, Oslo views Cyprus as “an extremely important partner in the region”, due to its bridging role between Europe and the Near East.

“We touched upon a broad array of issues, ranging from bilateral cooperation in fields including human rights, energy and tourism, to issues that are of European, regional and international interest, as well as on our cooperation within the framework of multilateral organisations,” said Christodoulides.
They also exchanged views on EU-Norway relations, as well as on a number of regional issues of mutual concern, Christodoulides went on.

He said he had briefed his Norwegian counterpart on the latest developments with regard to Turkey’s escalating activities in the greater Middle East region, and Cyprus’ EEZ, which, he said, were contrary to international law and the UN Convention on the Law of the Sea.

“These illegal actions by Turkey are regrettably also detrimental to the efforts of the UN Secretary-General to create an environment that is conducive to the resumption of negotiations” Christodoulides said.

He thanked Soreide for accepting an invitation to be one of the keynote speakers at the event “Women in Diplomacy” which his ministry had organised for later in the day.

From her part, Soreide said she had just visited Saudi Arabia, Israel and Palestine and had the opportunity to “exchange notes” with Christodoulides on regional developments, especially the American proposal on the Middle East and the dynamics it creates in the region. “Keeping a very close contact would be important in the coming weeks and months,” she added.

Soreide added that Cyprus was an extremely important partner in the region for Norway, both because of its bridging role between Europe and the Near East, as well as due to its long-standing history and the good dialogue it maintains with everyone.

“I also want to commend you for presenting your first draft national action plan on women peace and security” Soreide said, noting that this was “a milestone” and an area where they wanted to engage closely with Nicosia.

According to the minister, Norway and Cyprus have a close bilateral relationship also through the EEA and Norway grants, worth €11.5m for the current programme period.