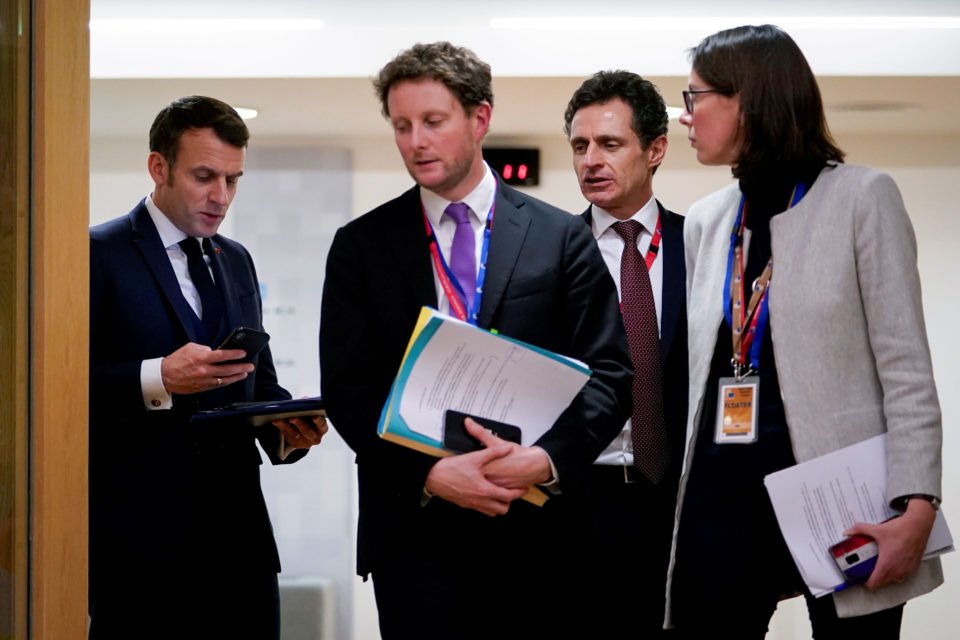 French President Emmanuel Macron walks with French Junior Minister for European Affairs Amelie de Montchalin on the sidelines of the second day of the European Union leaders summit, held to discuss the EU's long-term budget for 2021-2027, in Brussels

A European Union summit ended abruptly on Friday after leaders failed to reach agreement on the bloc’s long-term budget, following a two-day stand-off between poorer countries and “frugal” member states seeking to rein in spending.

Summit chairman Charles Michel gathered the 27 national EU leaders at the end of the day to bridge divisions, but they broke up within minutes after rival camps rejected a compromise plan he had proposed.

“We have to acknowledge that the differences are too big still to find agreement. This is why we have broken off the talks,” German Chancellor Angela Merkel told reporters. “We didn’t succeed, so we will have to work on.”

Setting the seven-year budget is always a tug of war, but it is fiercer than ever this time because Britain’s exit from the EU last month has left a 75 billion euro ($81 billion) gap at a time of costly new challenges from climate change to migration.

The standoff over the size of the 2021-27 budget and how to carve it up has exposed rifts between countries in the north and south, between east and west, and between more developed and less advanced economies.

It also underlines that, following the turmoil of Brexit that brought them together, the bloc still has many issues that divide it.

Denmark, Austria, Sweden and the Netherlands – dubbed “the frugal four” – arrived to the talks in Brussels on Thursday adamant that they would not accept a budget of more than 1% of the EU’s joint gross national income.

Net beneficiaries of the joint budget, meanwhile, were asking for more than Michel’s original proposal of 1.074%, equivalent to 1.09 trillion euros ($1.2 trillion).

Michel’s new proposal would have capped joint spending at 1.069%, but this would have represented a small spending reduction of about 10 billion euros over seven years compared to the original plan, and satisfied neither of the rival camps.

The “frugal four” stood firmly against a budget that would allocate one-third for “cohesion funds” to develop poorer regions and another third on support for farmers. Agriculture accounts for around 1% of the EU’s economy.

They want to see more focus on border management following Europe’s migrant crisis of 2015-16, tackling climate change, beefing up security and modernising the bloc’s economy through investment in research and digitalisation.

The EU’s poorer eastern and southern nations want to hold on to development aid, and they are backed by France, Ireland and others in seeking to uphold handouts for farmers.

French President Emmanuel Macron said he had worked closely with Merkel – whose country is the biggest net payer to the EU’s joint coffers – to try and bring bickering member states together.

He said countries had thwarted that by forming blocks.

“I think it’s not a good method to form groups and block things by clustering together, forming some sort of blocking coalitions,” Macron told reporters after the summit ended.

Michel’s revised proposal included sweeteners for net payers that would have preserved rebates on their contributions to the budget and appeased France by allowing slightly more funds for agricultural subsidies.

It also nudged up to 27% the share of overall spending to go towards projects aimed at tackling climate change.

However, one official said his new blueprint was too complex at a moment when there was basic disagreement on the size of the pot, dubbing it “a Frankenstein proposal”.

There will have to be a further summit – or summits – to get an agreement on the budget, but Michel will now consult with member states to decide when to bring the leaders back to the negotiating table. Without a deal by the end of the year, the bloc will have to freeze most of its projects from 2021.

“In the past it has always taken two or three meetings to reach a result,” Austrian Chancellor Sebastian Kurtz said.

“I am happy that we had a good discussion and that there was movement into the right direction. The frugal four will continue to coordinate well and try to reach a breakthrough at the next summit.”