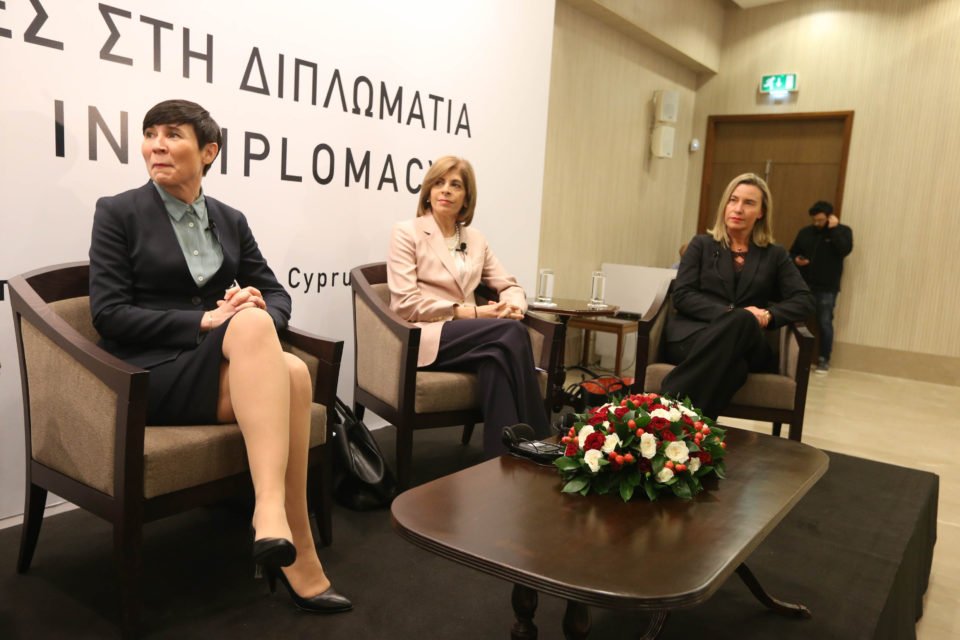 Former top EU diplomat Federica Mogherini, Norwegian Foreign Minister Ine Marie Eriksen Soreide and Cypriot EU Commissioner for Health, Stella Kyriakides were among the speakers at an event Titled ‘Women in Diplomacy’ organised by the foreign ministry on Friday to mark the 25th anniversary of the Beijing declaration for women rights.

In her address Soreide said foreign policy and national security were male-dominated areas, when the idea for women was to engage in softer political issues such as family relations and women`s issues. “We need the participation of women among all domains,” she said.

She also noted that women should be given the confidence to apply for these top jobs.
Kyriakides referred to the EU’s commitment to gender equality, saying she was proud to be part of the first team of European Commissioners led by a woman, in the most gender balanced Commission College ever.

She also said that for the first time, there was a stand-alone portfolio on equality. At the beginning of March the Commission would adopt a new Gender Equality Strategy for 2020-2024 that would address a number of critical issues that currently undermine equality.

“Gender mainstreaming is also being reinforced across other EU policies. In the area of health – which is my responsibility – we are committed to gender equality and anti-discrimination in all our actions and policies”, she said.

Former High Representative of the European Union for Foreign Affairs and Security Policy Federica Mogherini, shared her experiences as a woman in diplomacy and politics.

She said, the most common question she was asked was how she could have such a job and at the same time have children. “They would never ask a man with children the same question,” she said, and suggested an increase of paternity leave from day one. “That,” she said, would increase women’s participation in diplomacy, but would also help men in family life.

She also spoke of the role of media to transmit the image of women in diplomacy in order to encourage younger generation and send the message that girls could become everything they want without sacrificing family life.

She also argued that when women are involved in the negotiation table, there are fewer conflicts and it is easier to resolve disputes.