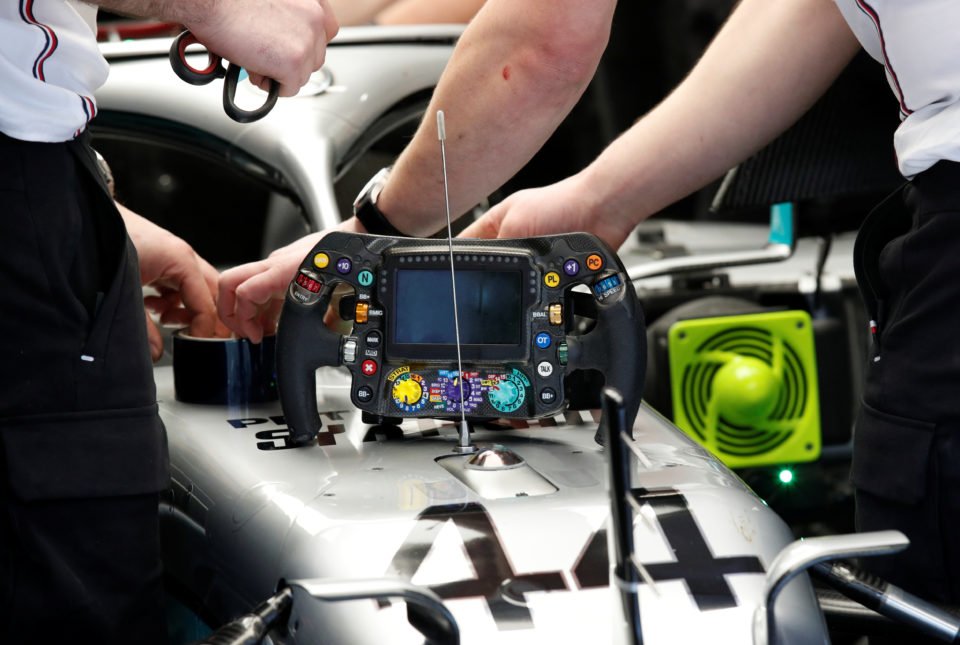 Lewis Hamilton's steering wheel is pictured during testing in Barcelona

Mercedes brought intrigue to Formula One testing on Thursday with television images showing Lewis Hamilton moving his car’s steering wheel forwards and backwards as he drove.

The mechanism appeared to alter the alignment of the front wheels, with the six-times world champion pulling the wheel towards him on the straights and pushing it back as he approached corners.

Technical director James Allison was coy about the details of a system he said was known within the team as DAS (Dual-Axis Steering).

“It’s novel idea,” he told reporters at Barcelona’s Circuit de Catalunya. “It just introduces an extra dimension to the steering for the driver that we hope will be useful during the year.

“Precisely how we use it, and why we use it, that’s something we prefer to keep to ourselves.”

The team started last year with eight wins in a row, despite Ferrari having an impressively quick car in testing.

Testing is not bound by the same regulations as grand prix weekends, with teams sometimes trying out developments they may never race.

Asked whether Mercedes were worried the governing FIA might rule the device illegal, Allison said they had been talking about it for some time, safety was not an issue and it was within the rules.

“This isn’t news to the FIA,” he said. “The rules are pretty clear about what is permitted on steering systems and I’m pretty confident that it matches all of those requirements.”

“I’m just pleased we’ve got it on the car, it seems to be useable and we’ll find out over the coming days how much benefit it brings us.”

Hamilton said he did not find it distracting and was encouraged to see his team were continuing to innovate to stay ahead of the game.

Ferrari rival Sebastian Vettel said the development had taken his team by surprise and they had discussed it over the lunch break.

“It’s called a steering wheel, not a push or pull wheel,” he said, while also questioning whether it was a ‘game changer’ and whether Mercedes would actually race it.

“Maybe I’m underestimating, but I don’t think that this is the ticket to win,” the four-times champion added. “I think there are a lot more elements to building up a competitive car.

“It’s an innovation and we will see whether it’s something that everyone has to pick up on or not.”

Allison said the steering wheel represented “only the tip of the iceberg of similar stuff” hidden out of sight across the car.

“Each of the new cars we bring to the track are festooned with innovation,” he said. “It’s just they are not always as obvious to you as a stand-alone system like this where you can see it with your own eyes.

“One of the things that gives me massive pride from working at Mercedes is to be part of a team that doesn’t just turn the sausage (machine) handle each year.”