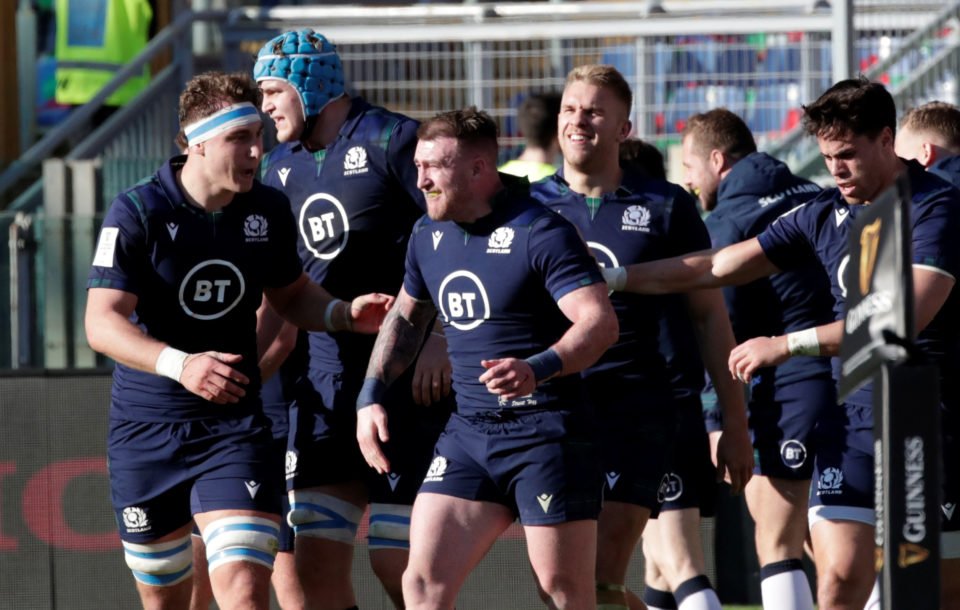 Scotland defeated Italy 17-0 on Saturday to record their first win of the 2020 Six Nations and go third in the standings after a scrappy affair at the Stadio Olimpico.

A sensational solo try from Stuart Hogg lit up the first half as the Scotland captain made up for costly mistakes in his first two games against Ireland and England with a dazzling run from inside his own half before finishing in the corner.

But Scotland pulled clear in the second half when Chris Harris punctured the Italian defence to touch down, before Adam Hastings raced under the posts to put the result beyond doubt with one minute remaining.

“We’re delighted with that,” said Hogg. “We came here to do a job and we’ve done exactly that. I’m so proud of the boys.”

Scotland, who earned losing bonus points in their opening two matches, move ahead of Wales and England into third place on six points, while Italy remain bottom without a point.

Wales host France later on Saturday before Ireland travel to England in the weekend’s remaining fixtures.

Hogg’s superb try was the highlight of a disjointed first half, as the full-back collected the ball just inside his own half, burst between two defenders and beat his opposite number Jayden Hayward for pace to touch down in the corner.

“Thankfully it just opens up for me but there’s a lot of method in the madness to get us into that position,” Hogg said.

The try marked a moment of redemption for the Exeter Chiefs player, after he dropped the ball over the line in the opening-day defeat by Ireland.

“I’ve had a lot of chat over the last couple of weeks about that and I wasn’t making a mess of that one,” he said.

Gregor Townsend’s side thought they had extended their advantage when Ali Price scored a try after half an hour, but it was chalked off for a forward pass by Hamish Watson in the build-up.

Hastings, starting at fly-half with Finn Russell still in exile after breaching team protocol, struggled from the kicking tee in the first half, missing a simple penalty and steering his conversion wide.

Italy’s Tommaso Allan fared no better when his long-range penalty just before halftime came back off the outside of the post.

Scotland began the second half brightly, coming close when Jamie Ritchie spilled the ball over the try line, and they eventually made their pressure count when Harris dived over the line after the Scots patiently went through the phases.

Italy could not take advantage of their opportunities when they came, exemplified by a quick counter-attack after 53 minutes led by Matteo Minozzi, which took them from their own 22 to within striking distance of the Scottish try line, only for the ball to be turned over by Magnus Bradbury.

The hosts were then reduced to 14 men for the final 10 minutes when replacement hooker Federico Zani was sent to the sin bin for a lifting tackle on Grant Gilchrist.

Hastings wrapped up the victory when he plucked the ball from the back of a ruck and ran under posts unchallenged, before converting his own try.