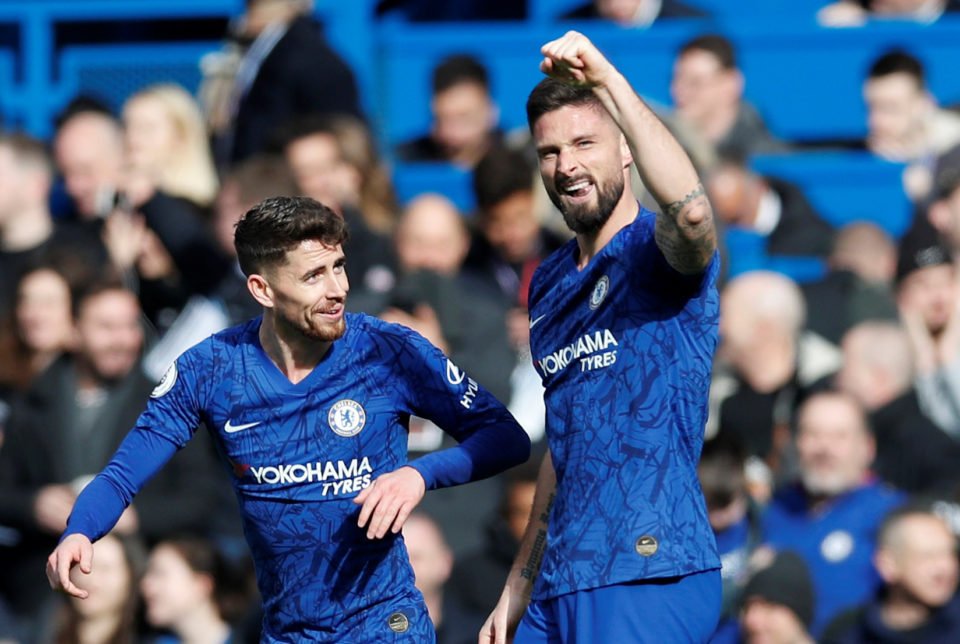 Chelsea boosted their hopes of a top-four finish with a 2-1 win over London rivals Tottenham Hotspur in the Premier League on Saturday while at the bottom Aston Villa and Bournemouth drifted deeper into trouble with damaging defeats.

Olivier Giroud and Marcos Alonso returned to the Chelsea starting lineup and responded with a goal each in the derby against Spurs at Stamford Bridge.

It was only Chelsea’s sixth win in 14 home Premier League games this season but was a timely one as they remain fourth, the last Champions league qualification spot, with 44 points from 27 games, four more than Jose Mourinho’s Spurs.

Erik Lamela’s shot deflected in off Antonio Rudiger to give Spurs some hope near the end but Chelsea were deserved winners.

Opportunist goals from Shane Long and Stuart Armstrong condemned Villa to a 2-0 defeat at mid-table Southampton.

Villa stay 17th on 25 points, one point above the relegation zone and a point behind Eddie Howe’s Bournemouth, who fell to a 3-0 loss at Burnley.

Burnley grabbed the lead in the 53rd minute with Czech striker Vydra claiming his second goal in as many games but the match turned on a remarkable minute of VAR-reviewed action on the hour mark.

Burnley appealed in vain for a penalty, arguing that Adam Smith had handled a Dwight McNeil cross — the resulting counter-attack ended with Callum Wilson feeding Harry Wilson who clipped the ball past goalkeeper Nick Pope.

But VAR ruled that Smith had indeed handled — cancelling out the Bournemouth goal and awarding Burnley a penalty which Jay Rodriguez converted to make it 2-0 after 61 minutes when moments earlier the score had stood at 1-1.

McNeil rounded off the win with a superb solo goal in the 87th to send the Clarets up to eighth.

Sixth-placed Sheffield United have begun to dream of a possible Champions League place but were frustrated as they were held to a 1-1 draw at home by lowly Brighton & Hove Albion.

A poacher’s goal from Brighton striker Neal Maupay cancelled out a peach of a strike from Enda Stevens.