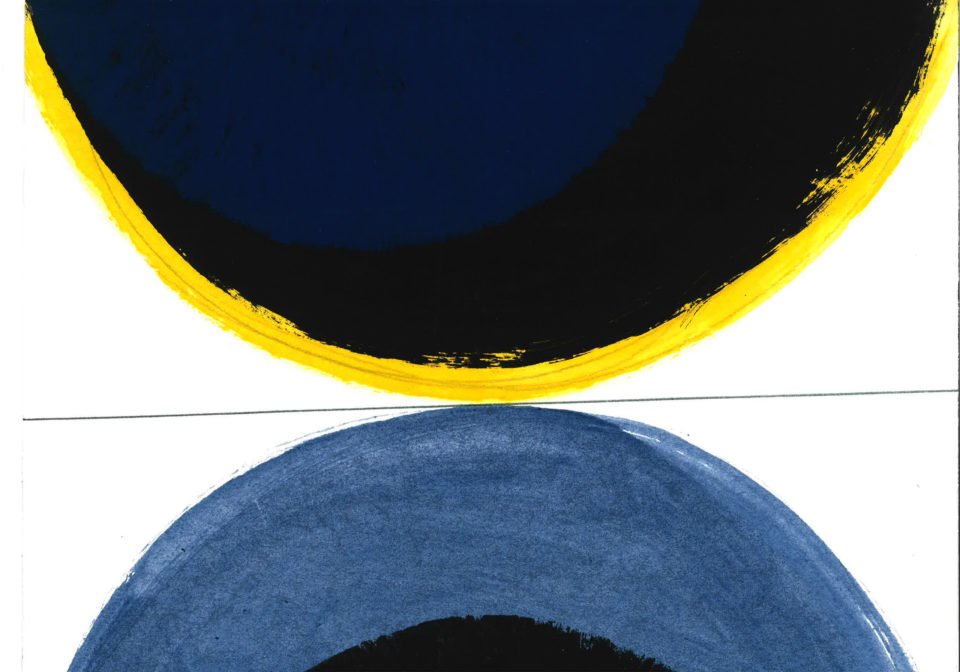 KunstRaumGoethe is the new event-series of the Goethe-Institut Cyprus, hosting exhibitions of artists and curators of contemporary art connected to Germany and Cyprus in different ways.

Two exhibitions will be hosted from the end of February until the end of March: Buch der Gezeiten (Book of Tides) by the German artist Horst Weierstall and Temporal Inconsistencies / Head and hand series by the Cypriot artist Kyriaki Costa.

Opening on February 27, Buch der Gezeiten is a wall installation of paper works consisting of two parts: the Buch der Gezeiten (coloured drawings in acrylic and felt-tip pen reminiscent of modern abstract art) and aphorisms (text transcriptions from diaries from 2019-2020). The basic elements of form, line and spaces in between are interrelated and through an open, timeless structure, have the effect of a walk-in book.

The basic idea for Weierstall’s works goes back to earlier actions and drawings in which the cross, circle and line functioned as form and symbol carriers. In this installation, the artist attempts to clarify the question of how boundaries, peripheries or cracks can be joined together. In 1876 Gustave Flaubert wrote in reference to literary boundaries: “Finally, I believe that form and background are two subtleties, two entities that never exist without each other.”

Weierstall was born in 1944 in Wuppertal-Elberfeld and came to Cyprus in 1981, where he was the first installation artist ever to realise projects in public space. In 2010 he founded the interdisciplinary art space TheArtSpace in Düsseldorf together with his daughter, choreographer Alexandra Weierstall. This space marks both a pivot and an obstacle between dance performance and the visual arts. Weierstall lives and works in Düsseldorf.

As a visual artist, Kyriaki Costa is interested in the repair of objects and the new aesthetic this creates. Through the restoration process, she intends to extract a new perspective, looking at how a space can be reused after its repair and how its identity can be redefined following the changes.

The new work by Costa could be compared to the theory of Jacques Le Goff. Trying to explain the thin line between past, present and future, Le Goff uses the example of inconsistencies in grammatical tenses and the fact that a past tense can be used as a reference to the present, or a present tense respectively as a reference to the future. This shows how malleable their relationship is and that in essence one is the creation of the other.

Costa was born in Nicosia. Her work investigates collective memory using personal narratives through ideological analyses of folkloric romanticism and conceptions of reality and imagination. Her artistic approach delves within undefined spaces in the environment and human behaviour. Her work practice is a conglomeration of contemporary technological practices and traditional methods. Costa actively participates in initiatives in Cyprus that focus on environmental issues.

Within the framework of the exhibition, the short film Marking Time by Nicolas Iordanou and Sylvia Nicolaidou will be screened on March 4, 19 and 31 at 7pm. The documentary reflects on the practice of visual artist Weierstall, who has experienced the division of Berlin and Nicosia. Although his practice spans over four decades, the subjects that it dealt with, such as division, restriction of movement and segregation, are as contemporary as ever.

Both exhibitions will open at Goethe-Institut in Nicosia on February 27 and will remain open until the end of March.