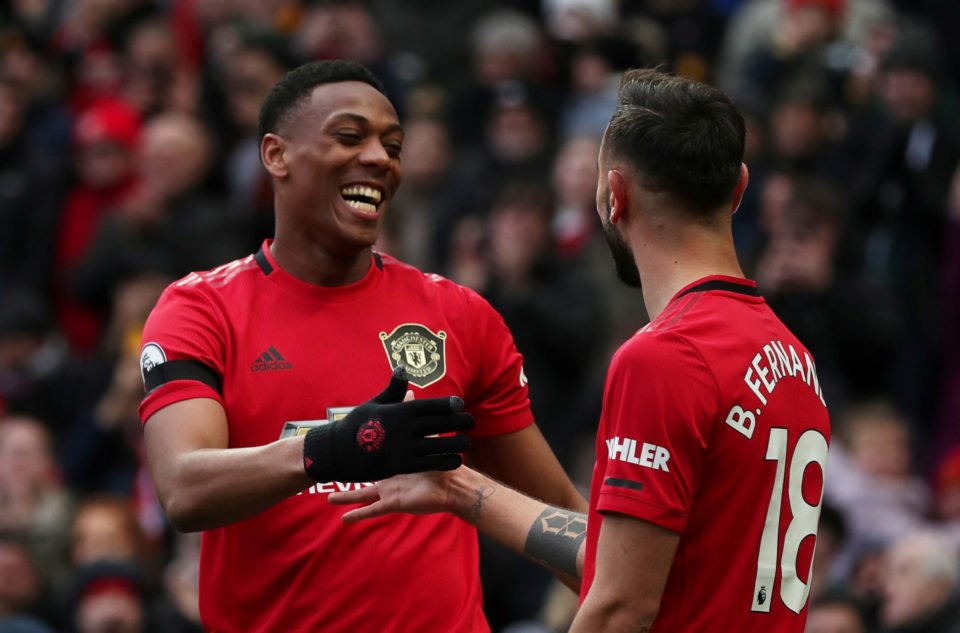 Manchester United kept alive their hopes of finishing in the Premier League’s top four after goals from Bruno Fernandes, Anthony Martial and Mason Greenwood secured a 3-0 home win over Watford on Sunday.

Portugal midfielder Fernandes scored his first goal for United with a 42nd-minute penalty before Martial and Greenwood netted fine individual efforts to lift them two places up to fifth on 41 points from 27 games.

United are three points behind fourth-placed Chelsea and one ahead of Tottenham Hotspur while struggling Watford stayed 19th on 24 points.

“A very good win, two good wins and two clean sheets, some goals to celebrate, now we want to kick on,” Solskjaer told the BBC, also referring to United’s 2-0 win at Chelsea on Monday.

“Fernandes is quicker than he looks. Very excited by having him in. He has come in, given everyone a boost and wants to conduct a game. There are big games coming up now.

“The thing that matters in football is scoring goals and that is what Greenwood does.”

Fernandes added: “This is the day every player wants to have. I just need to help the team, it’s what I need to do. I hope Martial scores more goals too like he did.”

The home side looked disjointed in the opening 20 minutes and both teams missed chances before Ben Foster tripped Fernandes and the playmaker sent Watford’s goalkeeper the wrong way with a confident spot-kick.

Watford had an effort ruled out for handball following a VAR check soon after halftime and United doubled their lead in the 58th minute when Martial picked up the rebound after Ben Foster blocked his initial attempt, left Etienne Capoue dumbfounded with dazzling footwork and dinked the ball over the keeper.

Greenwood put the icing on the cake with another goal of the highest quality in the 75th minute, unleashing a piledriver into the top corner after finding space on the edge of the penalty area.

United fans unfurled a giant banner before the kickoff and there was a minute’s silence to honour the club’s former goalkeeper Harry Gregg who died last Sunday at the age of 87.

Diogo Jota struck twice as Wolverhampton Wanderers pushed Norwich City deeper towards the drop with a 3-0 win over the Premier League’s bottom club at Molineux on Sunday.

The in-form Portuguese forward, who scored a hat-trick in Wolves’s 4-0 win over Espanyol in the Europa League on Thursday, put his side ahead, in the 19th minute, with a left-foot finish after good work from Matt Doherty.

Jota doubled Wolves’ advantage from close range after Norwich had failed to clear a corner.

Norwich keeper Tim Krul produced an outstanding save on the stroke of halftime to push a Ruben Neves free kick against the bar as Wolves looked to put the game beyond Daniel Farke’s side.

The third goal came early in the second half with Mexican Raul Jimenez slotting home after a Jota drive had flown out off the post.