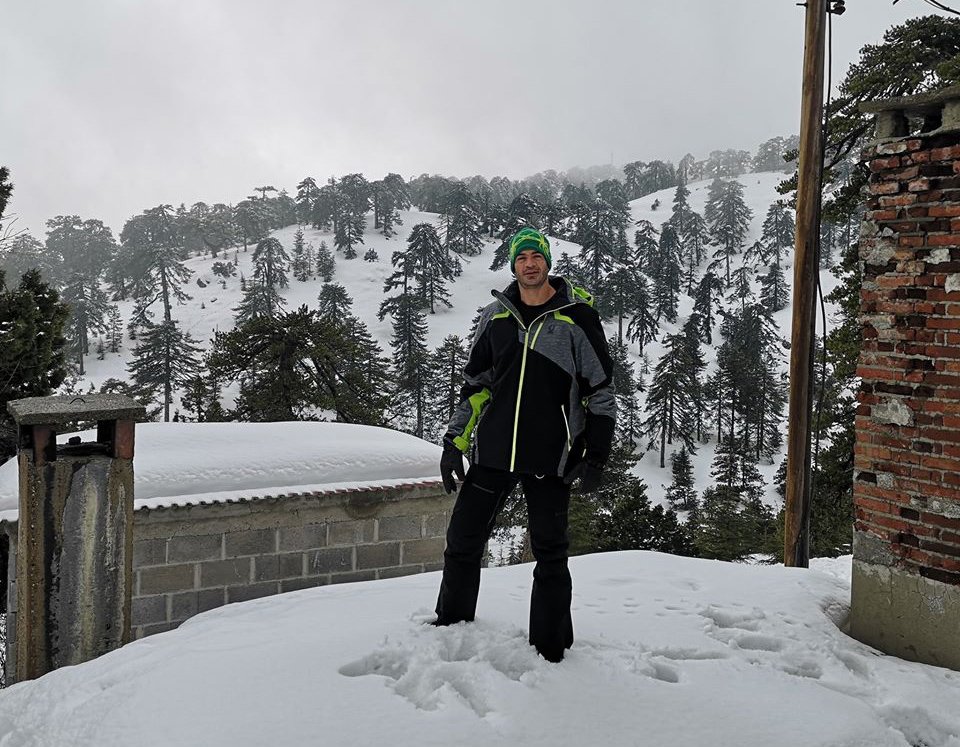 To say Eric Kitas is obsessed with the weather is almost an understatement. The young man who has single-handedly challenged the state meteorology department for forecasting the weather was drawing clouds aged two.

“I couldn’t speak but I could draw a cloud,” said Kitas who started a website offering amateur weather predictions when he was just 28 years old.

Eight years later, he is a professional meteorologist with numerous weather stations all over the island providing his faithful followers daily ten-day forecasts via Kitasweather.

The website, which includes a mobile application and Facebook page, has various features such as satellite and live camera access for 24/7 information about the weather. His videos of various weather phenomenons are always popular on social media.

“I started studying the weather on my own when I was 15 years old, as soon as I got my own computer,” Kitas told the Sunday Mail.

The teenaged Kitas, who had been born in Australia before his family returned to Cyprus when he was seven, focused on reading online the art of weather forecasting and studying the different global forecast models. As his expertise developed, his friends would demand predictions from the young weather enthusiast.

“I had a group [chat] of ten-twenty people. I would send them a forecast every now and then and they liked it because it was accurate.”

At first, his amateur predictions were shared among his small circle of gym friends but then strangers would contact him for weather predictions which he would text to them.

One of those texts ended up at a local radio station which offered Kitas his first professional job in weather forecasting, almost ten years ago. Shortly after, the self-made meteorologist launched his website with a team of five and was soon being invited by different media stations to talk about the weather.

He now appears on TV a few times a week, but he mainly tries to promote his website instead of his face.

“My parents get excited,” he said. “I don’t really like publicity, but some publicity is necessary to promote what you do.”

Kitas was successful and trusted as an amateur, but his love for his profession led him to enrol on a weather forecasting online course at Penn State university in the US. He graduated with 95 per cent in December 2018 after two years of studying.

“It was easy,” Kitas said, “I had acquired a lot of experience and knowledge already. This doesn’t mean I didn’t learn. I learned a lot.”

Apart from expanding his knowledge, Kitas felt responsible for his 46,000 Facebook followers and readers of his website.

“You must be able to give as accurate forecasts as you want the people to trust you.”

To do that, Kitas needed financial support to expand his resources and tools for better weather predictions.

“While I was doing it unofficially and as an amateur, the expenses were limited.”

Kitas installed his first weather stations and webcams about three years ago. “I have 12 [weather stations] at the moment, each cost around €2,000 euros.”

His weather stations have instruments and equipment to measure atmospheric variables such as temperature, wind speed and direction, humidity and rainfall.

“I can be at home and with my weather stations and webcams I can have a good idea of what’s going on, and through radar and satellite images it’s like having eyes on the ground and from above,” he said.

The Cyprus meteorology department also had 12 weather stations a few years ago, said Kitas but now they have around 30 across the island.

“Looks like competition has made them grow,” he quipped. “That makes me feel good about what I do.”

As Kitasweather gained success, the man who operates needed assistance.

“For eight years I was working on my own, a few months ago I hired another meteorologist who I supervise and he is doing very well.”

Weather forecasting is only one area of Kitas’ busy life. He also owns two seasonal shops selling winter and summer wear and grows organic fruit and vegetables in his mother’s village of Prastion Kellakiou, Limassol.

For both businesses, weather remains a vital element.

His knowledge of the weather helps him with his crops, though damage is inevitable.

“You need to know the weather, when it’s going to get cold to have the boots in, when summer is coming to know when your last shot is to put on the clearance winter sale.”

Meanwhile, Kitas kept his first job, telling the weather in Kanali 6 every morning at 9.30am.

An English version of the website is on the way, while more information will be added on the site and mobile applications. Kitas is also planning to have around 20 cameras by the end of the year and add more weather stations.

“If I keep adding five or six weather stations per year, I am happy.”