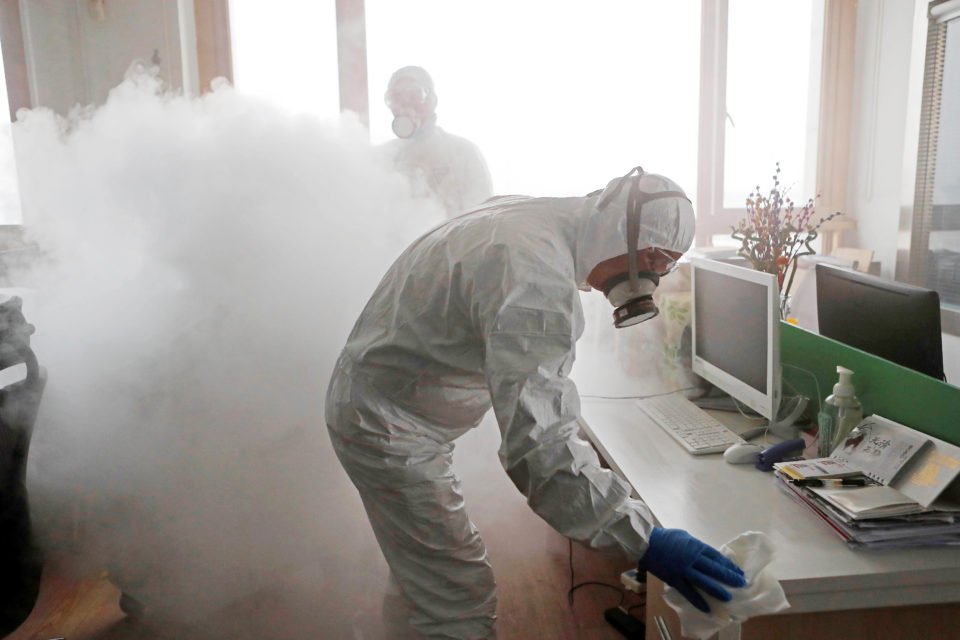 By Gabriel Crossley and Hyonhee Shin

The coronavirus death toll climbed to seven in Italy on Monday and several Middle East countries were dealing with their first infections, sending markets into a tailspin over fears of a global pandemic even as China eased curbs with no new cases reported in Beijing and other cities.

The virus had put Chinese cities into lockdown in recent weeks, disrupted air traffic and blocked global supply chains for everything from cars to smartphones.

But China’s actions, especially in Wuhan – the epicentre of the outbreak – probably prevented hundreds of thousands of cases, said the head of the World Health Organization (WHO) delegation in China, Bruce Aylward, urging the rest of the world to learn the lesson of acting fast.

“They’re at a point now where the number of cured people coming out of hospitals each day is much more than the sick going in,” he said.

The Dow Jones Industrials dove to a two-month low while the S&P 500 and Nasdaq were at their lowest in three weeks on Monday, all off by about 3%.

WHO chief Tedros Adhanom Ghebreyesus said the word “pandemic” did not fit the facts.

“We must focus on containment while preparing for a potential pandemic,” he told reporters in Geneva, adding that the world was not witnessing an uncontained spread or large-scale deaths.

The epidemic in China peaked between Jan. 23 and Feb. 2 and has been declining since, the WHO said.

Dr. Mike Ryan, head of WHO’s emergencies programme, told reporters it was still possible to contain the virus and that it might appear each year like the flu.

The White House is considering asking lawmakers for emergency funding to ramp up its response to the fast-spreading virus, a White House spokesman and an administration source said on Monday. Politico and the Washington Post had reported the Trump administration may request $1 billion.

Europe’s biggest outbreak is in Italy, with some 220 infections – compared with just three before Friday – and a seventh death.

In northern Italy, authorities sealed off the worst-affected towns and banned public gatherings across a wide area, halting the carnival in Venice, where there were two cases.

Shops are shut, bars are closed and people speak to each other from a safe distance.

Japan had 773 cases as of late Sunday, mostly on the cruise ship quarantined near Tokyo.

In South Korea, drone footage https://share.insider.thomsonreuters.com/link?entryId=1_jqhog27w showed what appeared to be hundreds of people queuing up outside a Daegu supermarket to buy face masks.

Liang Wannian of China’s National Health Commission said while the rapid rise had been halted, the situation was still grim. He said over 3,000 medical staff had become infected, most in Hubei province surrounding Wuhan, probably due to the lack of protective gear and fatigue.

The coronavirus has infected nearly 77,000 people and killed more than 2,500 in China, most of them in Hubei.

There was a measure of relief for the world’s second-largest economy as more than 20 province-level jurisdictions, including Beijing and Shanghai, reported zero new infections.

Outside mainland China, the outbreak has spread to some 29 countries and territories, with a death toll of about two dozen, according to a Reuters tally.

South Korea reported 231 new cases, taking its total to 833. Many are in its fourth-largest city, Daegu, which became more isolated with Asiana Airlines and Korean Air suspending flights there until next month.

Kuwait, Bahrain, Oman, Afghanistan and Iraq reported their first new coronavirus cases, all in people who had been to Iran, where the toll was 12 dead and 61 infected. Most of the infections were in the Shi’ite Muslim holy city of Qom.

A WHO team is due in Iran on Tuesday.