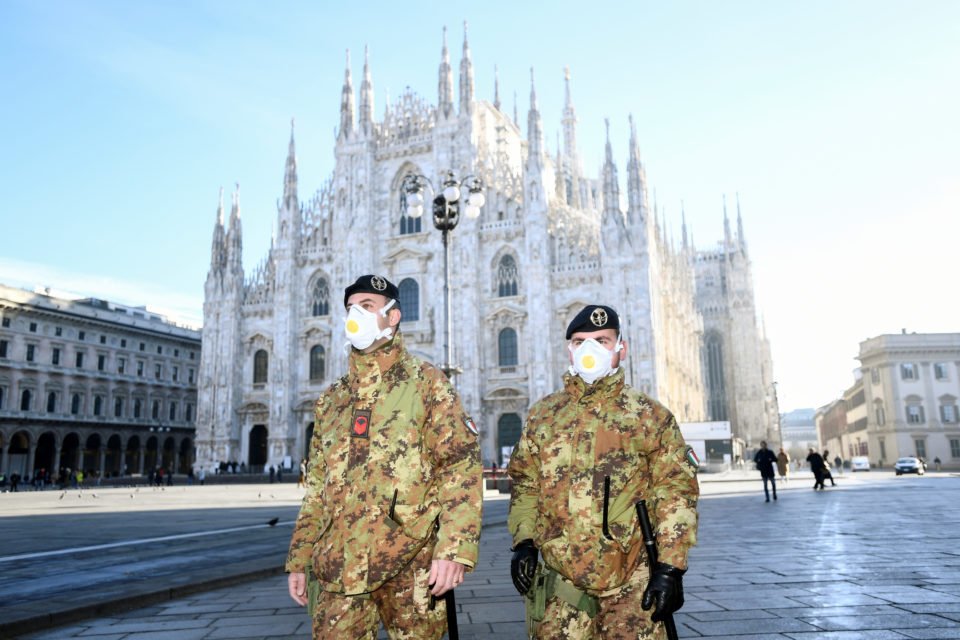 By Elvira Pollina and Emilio Parodi

The death toll in Europe’s largest coronavirus outbreak rose to seven on Monday and new cases climbed above 220 as Italy shut down much of its wealthy north to curb the disease’s spread.

Italian shares tumbled more than 5%, the biggest daily drop in almost four years, on worries the flare-up could cause a recession, while worried residents emptied supermarket shelves to stock up on essentials.

Authorities in the northern regions of Lombardy and Veneto, the industrial and financial heartlands of Italy, shut schools, universities, museums and cinemas for at least a week, and banned public gatherings including the famed Venice carnival.

Ten towns in Lombardy close to Italy’s business capital Milan, with a combined population of nearly 50,000, have been placed under effective quarantine, with similar measures adopted for a small town in neighbouring Veneto.

“To be honest, nobody thought the spread would be so aggressive,” Lombardy regional governor Attilio Fontana told 102.5 RTL radio, predicting, however that the virus would regress in days due to the emergency measures.

Local authorities announced four new deaths on Monday – three men in their 80s and a 62-year-old. Three previous fatalities recorded since Friday were also elderly people. All those who have died had underlying health problems.

Lombardy remained the worst hit region with 172 confirmed cases, while neighbouring Veneto had 33 infections, including four in Venice, which had been packed with tourists before its carnival was curtailed two days ahead of schedule.

At national level, 27 people were in intensive care, 101 hospitalised and 94 being monitored at home, officials said.

Economists warned the disruption would take a heavy toll on local businesses and Italy’s blue-chip stock index fell 5.4%, with companies most at risk from an expected spending slump bearing the brunt.

Italy is the world’s fifth most visited country and tourism contributes about 13% to GDP, according to the World Trade and Tourism Council. The sector is already taking a hit.

“We have been swamped by cancellations in the last few days, in restaurants, hotels, everywhere,” said Patrizio Bertin, the head of the Veneto branch of Italy’s trade lobby Confcommercio.

Milan, a city of 1.3 million people, was much quieter than normal. The city’s usually bustling courtrooms were deserted, normally packed bars were largely empty and even the city’s imposing Gothic cathedral closed its doors.

“We were only meant to spend three days in Milan and then go to Venice for the carnival but everything is shut,” said Russian tourist Violla Belova, 50, wearing a face mask as she took photographs of the shuttered Duomo cathedral.

“I hope we won’t have to cut our trip short.”

With other countries looking to stop the spread, Mauritius on Monday told passengers from Lombardy and Veneto just arrived aboard an Alitalia aircraft that they would have to go into quarantine if they wanted to stay.

Alitalia said 40 out of the 224 passengers and crew were affected and decided to fly back home immediately.

Ireland said its citizens should not travel to parts of Italy affected by the outbreak. Tunisia announced it may suspend some flights to Italy to reduce exposure.

Prior to Friday, Italy had reported just three cases of the virus – all of them people who had recently arrived from the Chinese city of Wuhan, where the illness emerged late last year.

Health authorities were frustrated by their failure to identify how the outbreak in the north had started.

Doctors say the focal point was the cluster of now closed-off towns in Lombardy, with the disease spreading fast as the first patients sought hospital attention.

However, none of the initial patients had been to China and officials do not know who brought the infection to the area.

“By now, identifying ‘patient zero’ in statistical terms would be a great satisfaction … but you understand that the situation has evolved and must be handled completely differently,” said Lombardy official Giulio Gallera.

5 benefits of education in Cyprus for foreign students