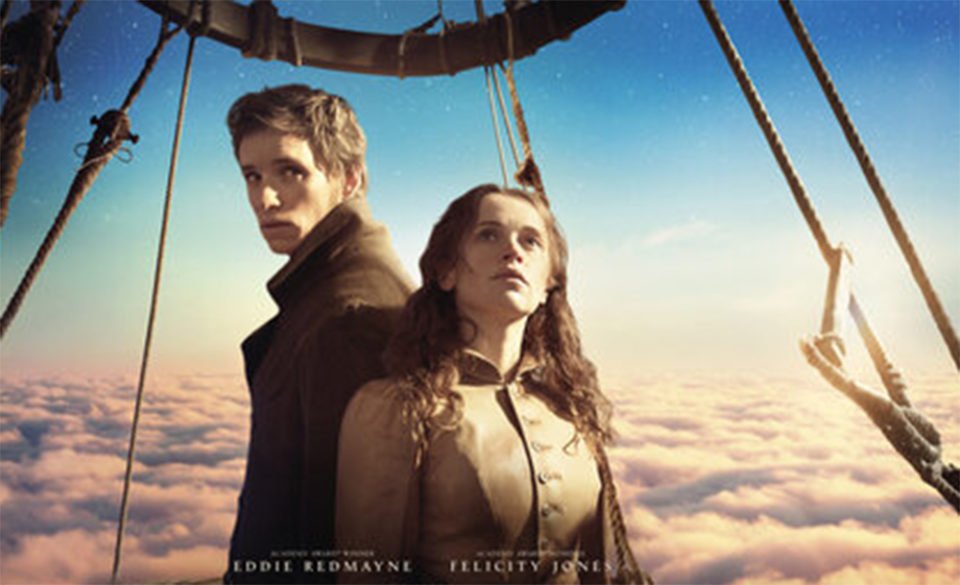 It seems wrong to say it – British period dramas coming, after all, with a presumption of Quality, not just entertainment – but The Aeronauts only works as an action movie. This tale of scientist James Glaisher (Eddie Redmayne) and pilot Amelia Wren (Felicity Jones) taking to the skies in a hot-air balloon in 1862, ascending to perilous heights more often associated with jumbo jets (never mind Aeronauts, we should call them Balloonatics) is conventional in most ways, and dishonest in some ways. The action, however, is terrific, whether it’s the frail-looking basket getting tossed around in a storm, or a heroic act undertaken by Ms. Wren at 30,000 feet or thereabouts which I won’t spoil – except to say it’s peek-through-your-fingers terrifying if you happen to have a fear of heights.

Everything else is hackneyed, annoying, or both. The opening credits introduce us to the milieu by following a random kid through a crowded Victorian setting, which is a cliché. The final credits are backed by a soppy MOR ballad, which is also a cliché (and anachronistic). Glaisher and Wren are both outsiders, in familiar ways. He’s a geeky scientist, shy around women, forever being laughed at by hidebound colleagues who don’t share his fascination with meteorology (you might say he’s a climate scientist surrounded by sceptics, making the film even more superficially ‘relevant’). She, of course, is a woman, hence oppressed by 19th-century society and advised to get married and forget about being an Aeronaut.

Redmayne won an Oscar for portraying another scientist, Stephen Hawking, in The Theory of Everything, co-starring Jones as his wife. Her role was thankless in that film – but this one makes up for it, Amelia being not just the more intrepid of the duo, but also the more soulful. She’s mourning her husband, another aeronaut, and at one point makes a speech (Jones puts it across beautifully, her eyes gleaming) recalling “his deep and true love for the beauty of the world”. “I cannot quantify what you’ve lost,” replies James, a pasty-faced man of readings and measurements. No surprise that Wren is the one performing the aforementioned heroic act, while Glaisher lies unconscious and, as he puts it, “insensible”.

James Glaisher (1809-1903) was a real person. He did go up in a balloon in 1862, and did in fact lie unconscious while his co-pilot saved his life. Amelia Wren, however, is a composite character, i.e. completely made-up. The Aeronauts is ‘inspired by true events’, a vague designation allowing considerable leeway – but is it fair to invent a new character, then ascribe to them the exploits of a real-life aeronaut? Henry Tracey Coxwell (1819-1900) is the injured party here – the actual co-pilot on that voyage, who actually performed the heroic act, but has been written out of the film’s version of history.

It’s obvious why the script makes the change; replacing Coxwell with another man would’ve been meaningless, but replacing him with a woman adds a strain of empowerment which, again, makes it ‘relevant’. I can only assume it’s hard to get financing in the UK these days unless one somehow celebrates diversity – but then maybe Brits should just stop making period dramas for a while; Britain wasn’t diverse in the mid-19th century, and it’s silly (and dishonest) to behave like it was. At least female balloonists did exist in the 1800s – but what about the ‘colour-blind’ casting of Himesh Patel, a second-generation Indian Briton, as John Trew, Glaisher’s friend and fellow scientist? On the one hand, why not? It’s not like the real Glaisher looked anything like Eddie Redmayne (and Trew is fictional anyway). On the other, period pieces should create a facsimile of the time they’re portraying – and we all know it took at least a century after 1862 before brown-skinned people could become so visible, and accepted, in British society. The film’s attempts to improve the past – by scrubbing it clean, and making it more like the present – shatter the illusion. More than that, they seem disrespectful to the time it’s portraying.

The Aeronauts doesn’t work as a period drama, in fact it doesn’t work as a drama. The devices it uses to inspire its heroes – a half-senile dad in his case (“Prove them wrong!”), a visit to the husband’s grave in hers – are, again, clichéd. The contrast between them is too artificial, especially at the launch when flamboyant Amelia puts on a show while humourless James fusses over his equipment and grumbles about her antics (it’s like they’ve only just met). Even the emphasis on the serenity and natural beauty of life in the skies – an aureole, a swarm of butterflies – seems contrived, though it makes for some pretty images. When it swings into nail-biting action, however, when you feel the precariousness of a wicker-and-silk contraption surrounded by sky – not to mention a drop into nothingness – it’s a whole other story. The higher The Aeronauts goes, the higher it soars.