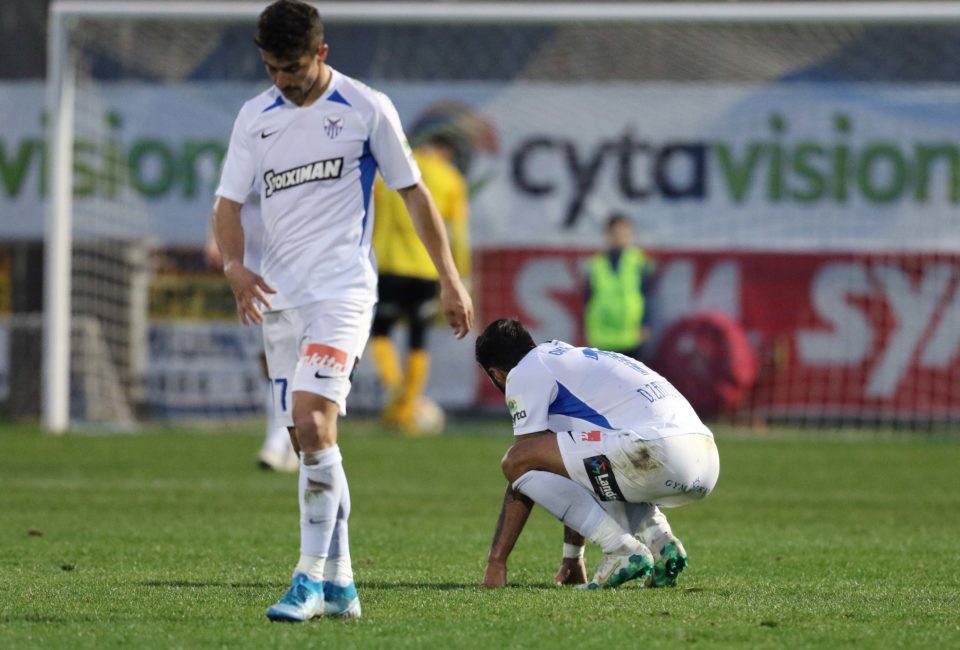 League leaders Anorthosis suffered one of their worst defeats in recent times as they were thrashed 5-0 by Ethnikos in Achna on Sunday.

Temur Ketsbaia’s men, however, remain top of the table with 43 points, just one above Omonia, after the Greens beat Enosis Paralimni 3-0 on Saturday.

Anorthosis’ night started turning sour in the 28th minute, when Igor Khudobyak opened the score from the penalty spot. Ethnikos then went on to score two more before the end of the first half with Koneh Ibrahim and Marios Elia, who then doubled his tally in the 57th minute.
Jovan Kostovski set the final when he scored in the 84th minute.

“These things happen when you take tour opponents for granted,” said Ketsbaia after the game.
“There are no easy games in the league, we are not a super team and we need to remain focused. I’m the first one responsible for the heavy defeat.

“However, one game cannot erase the work we’ve done in the last seven months. The important thing is to learn from it.”

Omonia’s home game on Saturday got off to a good start thanks to their captain Matt Derbyshire, who opened the scoring in the sixth minute with his 12th league goal of the season.

Henning Berg’s men only managed to double their lead late in the game, thanks to Ioannis Kousoulos in the 82nd minute. But the real highlight came just before the final whistle, when 16-year-old Loizos Loizou marked his professional debut with a goal to make it 3-0.

Omonia currently hold a four-point lead over third-placed Apoel, who lost 2-0 to Pafos, their second defeat in three games.

The champions, who were beaten 3-0 at home in the first leg of the Europa League round-of-32 by Basel, conceded the first goal in the 57th minute, when Paphos’ Finnish midfielder Onni Valakari converted a penalty.

He then completed his brace 11 minutes later when he scored the final goal of the game and his fourth in the league.

Apoel’s defeat means they are now only three points above Apollon, who won their game against Doxa on Saturday 3-2, their first win after four consecutive losses.

Elsewhere, Olympiakos and Aek Larnaca both drew their home games on Sunday against Ael Limassol and Nea Salamis respectively.

Olympiakos went under against the visitors early on thanks to a goal scored by Boris Godal, but managed to draw through Panayiotis Zachariou in the 67th minute.