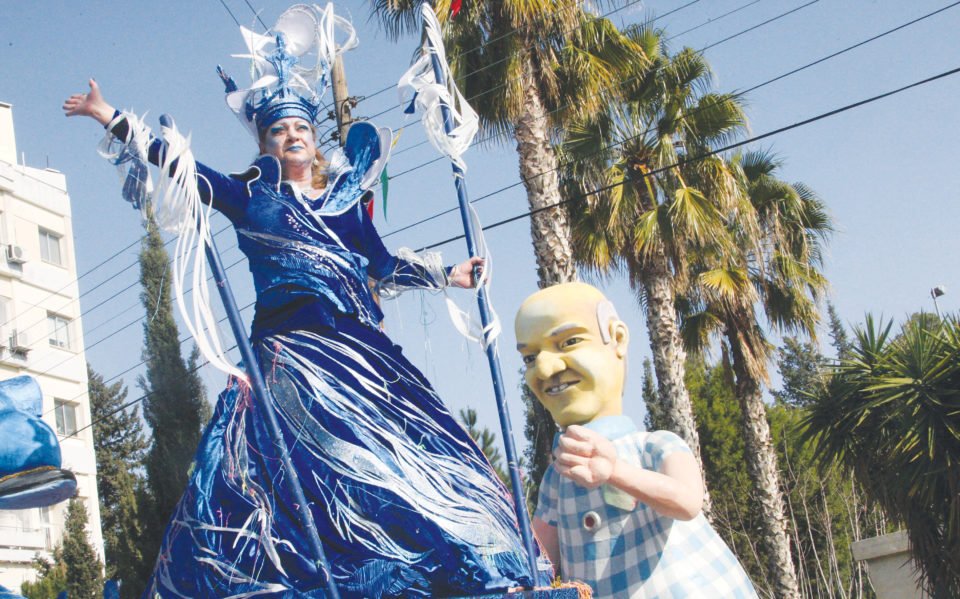 It’s not just Limassol that will host a carnival parade. ALIX NORMAN looks at what is happening around the island.

Sun, sea and samba; palm trees, parties and parades. No, this isn’t Rio – but it might as well be. Because over the next week, everything on the coast is Coming Up Carnival!

PAPHOS
While the majority of parades happen on March 1, Paphos is kicking events off in advance – beating the rush with a carnival procession a day earlier than usual. On February 29, the annual Grand Carnival Parade of Paphos will see local groups, communities, and even visitors dance down Poseidonos Avenue on the seafront in a spectacular burst of colour and music.
Starting at the Almyra Hotel at roughly 3pm, and wending its way to the Archaeological Park car park in Kato Paphos, the Grand Parade will be compered by local luminaries Michalis Sofocleous and Xenia Constantinides, and accompanied by “a programme of carnival hits” from the Pafos Municipality Philharmonic Orchestra. It may not be the biggest parade on the island, but the Pafos Carnival is a jolly good chance to soak up the local party atmosphere; the grandkids will love it!

LARNACA
Larnaca is also getting a jump on activities, with its Grand Carnival Parade taking place on the afternoon of February 29. Starting at 4.30pm from the central Police Station, the Parade runs along Phinikoudes seafront to the Coffee Island corner at the end of the street.
A smaller parade than in other towns, this iteration will last for approximately an hour, and see more than 800 performers dance their way along the street in a charming exhibition of local colour. “We’re not copying other towns,” say organisers, “but rather giving the people of Larnaca the chance to enjoy a fun experience with their friends.”
With local DJs spinning non-stop tunes from the Central Stage, the parade is a wonderful opportunity to dress up and party on down. More a gentle jamboree than an all-out excess, the Larnaca Carnival is a rather nice way for the whole family to enjoy the pre-Lenten celebrations together.

PARALIMNI
Ayia Napa doesn’t have a Carnival Parade, having sensibly ceded festivities to the Paralimini Municipality. Here, on Cyprus’ eastern coast, activities begin on the evening of February 29 with a Night Party under the stars, and segue into the main parade on March 1.
Taking place on February 29 from 8pm at the intersection of Griva Digeni Avenue and Tasu Markou Street, the Night Parade is billed as “a frantic, crazy gathering in which you’ll have fun together till the morning. Large parade crews, organised ensembles, and crowds of revellers partying in the streets to the frenzied sounds of Carnival” are the order of the evening.
The following day, we’ve got the Grand Parade. Starting at 2pm and running along the main Protaras/Cape Greko strip, this spectacular promises floats and groups from all over the Famagusta region in “a magical world of fun, dancing, and singing.” More than 3,500 performers purportedly take part, and the whole idea is “to forget your cares and party with your neighbours.” The two-hour extravaganza will be followed by a massive street party in the centre of town, with “retro and pop sounds from well-known DJs creating a carnival party enjoyed by over 35,000 locals and visitors!”

LIMASSOL
This is the Big One: the parade to end all parades. Limassol has long warranted its reputation as the island’s party city, and the carnival festivities are a tribute to the region’s character. Since February 20, events have been taking place all over the town, with mini-parades (singers, cyclists, and dance groups all taking to the streets in an excess of merriment). But on March 1, it’s the Grand Parade, and there’s no better place to enjoy carnival fever.
Starting at 1pm from the Ayios Nikolaos roundabout, the Grand Parade will see the King of Carnival (one “George Nicolaou, renowned local choreographer and active carnival participant for the last 25 years!”) enter the city, accompanied by thousands of revellers. Spectacular floats, companies of dancers, marching bands and revellers of all ages will process down to the Polemidia Traffic Lights, before heading over to the Old Port Square at 9pm for a massive party at which we’ll all be “waving goodbye to this year’s Carnival.”