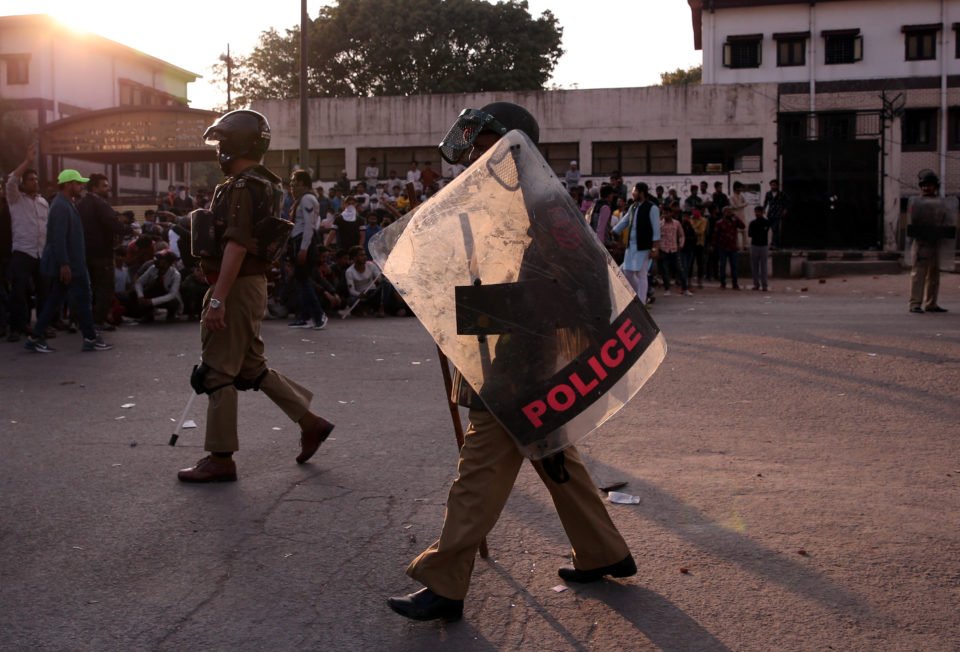 Policemen patrol in a riot affected area after clashes erupted in New Delhi.

More than a dozen people have been killed and hundreds injured in clashes between opposing groups of protesters in New Delhi, hospital officials said on Tuesday, as riots overshadowed U.S. President Donald Trump’s first visit to India.

The clashes, the worst in the capital since unrest over a new citizenship law began in December, started at the weekend but turned deadly on Monday. Violence erupted again in multiple areas of northeast Delhi on Tuesday, just miles away from where Trump and Indian Prime Minister Narendra Modi met for talks.

India’s capital has been a focus of unrest against the Citizenship Amendment Act, which makes it easier for non-Muslims from three neighbouring Muslim-dominated countries to gain Indian citizenship.

Local TV channels showed huge clouds of smoke billowing from a tyre market that had been set ablaze and Reuters witnesses saw mobs wielding sticks and stones walking down streets in parts of northeast Delhi, amid further incidents of stone-throwing.

India’s junior home minister G. Kishan Reddy told Reuters’ partner ANI on Monday that the violence was “a conspiracy to defame India”, at a time when Trump was visiting the country.

Some of those protesting at the citizenship law alleged, however, that Modi’s ruling Bharatiya Janata Party (BJP) and its supporters were targeting Muslims and instigating the violence.

“We have no weapons, but they are firing at us,” said Mohammad Shakir, a demonstrator opposed to the law. “This BJP is targeting Muslims. They want to turn India into a Hindu country.”

Reuters witnesses at a local hospital spoke with both Hindu and Muslim victims, who were injured in the violence on Tuesday. A few victims on both sides of the violence had suffered bullet wounds, and many had visible injuries on their heads and bodies.

An official at Guru Teg Bahadur Hospital in New Delhi said 13 people had died there and more than 150 injured had been treated at the hospital, many from bullet wounds.

An official at the Al-Hind Hospital in New Delhi said two men had died and over 200 injured had been treated there.

A fire department official said his teams were responding to more than a dozen calls over arson attacks, despite emergency measures prohibiting any gatherings in the violence-hit areas.

“We have sought police protection as our vehicles are being blocked from entering the affected areas. The situation is very grim,” Delhi Fire Department Director Atul Garg said.

One fire department vehicle was torched by protesters on Monday and a small number of firemen were injured, Garg added.

The joint commissioner of police Alok Kumar said about 3,500 police and paramilitary officers had been deployed.

Police fired teargas and pellets to scatter demonstrators protesting against the citizenship law in the Jafrabad neighbourhood of northeast Delhi on Tuesday. A young man suffered a pellet wound to his thigh, while another sustained injuries to his eyes, leaving his face bloodied.

In New Jafrabad, local residents patrolled the street with sticks and metal rods.

Two reporters with the local NDTV news channel were attacked and badly beaten by a mob.

On Monday police used tear gas and smoke grenades but struggled to disperse stone-throwing crowds who tore down metal barricades and torched vehicles and a petrol pump.

“Whatever problems people have can be resolved peacefully. “Violence will not help find a solution,” he said on Tuesday.

But, on Tuesday, after police cleared an anti-government protest site in northeast Delhi, B. L. Santosh, a leader from Shah’s party called for a harsh response. “The game starts now. Rioters need to be taught a lesson or two of Indian laws,” he said in a tweet.

Schools in the northeast of the city were shut on Tuesday and at least five metro stations closed.

An announcement over a mosque loudspeaker urged protesters to stay non-violent and not attempt to cross police barricades.

“We don’t have a problem with the police, we are against the government’s law,” the announcer said.

The Citizenship Amendment Act has sparked accusations that Modi and his BJP are undermining India’s secular traditions. Objectors have staged protests and camped out in parts of New Delhi for two months.

On Monday, Trump praised India as a tolerant country.

“India is a country that proudly embraces freedom, liberty, individual rights, the rule of law and the dignity of every human being,” he told a rally of over 100,000 people in Modi’s home state of Gujarat. “Your unity is an inspiration to the world.”