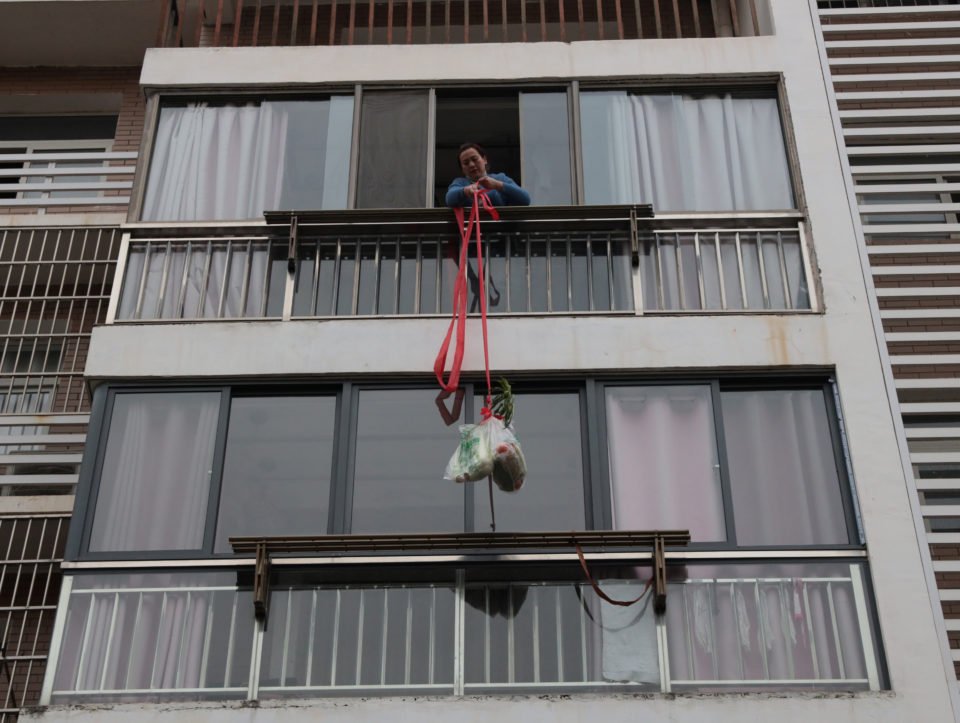 A resident pulls back a rope tying groceries delivered by community workers as the residential compound is under sealed management, following an outbreak of the novel coronavirus, in Yichang, Hubei province, China February 22, 2020.

South Korea aims to test more than 200,000 members of a church at the centre of a surge in coronavirus cases while the United States pledged $2.5 billion to fight the disease, as it spreads rapidly beyond China’s borders to Europe and the Middle East.

Countries around the world are stepping up efforts to prevent a pandemic of the flu-like virus that originated from China late last year and has now infected more than 80,000 people, 10 times more cases than the SARS coronavirus.

Japan’s government urged people to telecommute or work staggered hours to stop the spread of the coronavirus, and Hong Kong media reported that schools in the Asian financial hub would remain closed for another month.

The White House said more than $1 billion would go toward developing a vaccine, with other funds earmarked for therapeutics and the stockpiling of personal protective equipment such as masks.

The U.S. and South Korean militaries said on Monday they may cut back joint training due to mounting concerns about the spreading coronavirus, in one of the first concrete signs of the virus’s fallout on global U.S. military activities.

The disclosure came during a visit to the Pentagon by South Korean Defence Minister Jeong Kyeong-doo, who acknowledged following talks with U.S. Defense Secretary Mark Esper that 13 South Korean troops had tested positive for the virus.

The U.S. military said a 61-year-old woman in South Korea who tested positive for the virus had recently visited a U.S. military base in the southeastern city of Daegu. It was the first infection connected to U.S. Forces Korea, which counts about 28,500 American troops on the peninsula.

South Korea – which remains technically at war with the nuclear-armed North – has the most virus cases in Asia outside China and reported its ninth death and 60 new cases on Tuesday, for a total of 893 cases.

Of the new cases, 16 were in the southeastern city of Daegu, where a church at the centre of the outbreak is located, and 33 were from North Gyeongsang Province, health officials said.

About 60 percent of South Korea’s cases have been linked to the Shincheonji Church of Jesus.

The leader of the Shincheonji Church said it had agreed to provide authorities with the names of all its members in South Korea, estimated by media at about 215,000 people.

The government would conduct coronavirus tests on all members “as soon as possible” once it got the information, the prime minister’s office said in a statement.

“It is essential to test all of the church members in order to contain the spread of the virus and relieve public anxiety,” the office said.

Vice Health Minister Kim Kang-lip said the priority was to test about 1,300 of the 9,200 members of the Daegu church who are showing symptoms, which he said would be completed by Wednesday.

Authorities hoped to stabilise the situation in Daegu within four weeks, he added.

Americans should avoid all nonessential travel to South Korea due to the coronavirus outbreak, the U.S. Centers for Disease Control and Prevention said on Monday.

In Japan, which has reported four deaths and 850 cases mostly on a cruise ship docked near Tokyo, Health Minister Katsunobu Kato said it was too early to talk about cancelling the Tokyo Summer Olympics due to start on July 24.

Australia’s top Olympic doctor has warned the next fortnight will be the “real test” for the Tokyo Games, as teams draw up contingency plans for pre-Games training in “safe” areas, reported Australian media.

China reported a rise in new coronavirus cases in Hubei province, the epicentre of the outbreak. Excluding the latest cases in Hubei, the rest of China had just nine new infections on Feb. 24, the lowest number of cases since Jan. 20.

The overall death toll in mainland China had reached 2,663 as of the end of Monday, up by 71 from the previous day.

The epidemic in China peaked between Jan. 23 and Feb. 2 and has been declining since, the World Health Organization (WHO) said.

As the pace of new infections slowed, Beijing signalled it would begin to ease some of the restrictions on travel and movement which have paralysed production in the world’s second-biggest economy.

Nomura investment house estimates only a third of people have returned to work and only 40% of businesses have started back up since the end of the extended Lunar New Year holidays.

“We are concerned there might be a second wave (of cases) in coming weeks as hundreds of millions of workers return to work in urban areas and the COVID-19 epidemic is rapidly developing into a global pandemic,” it said in a report.

Asian share markets showed some resilience on Tuesday after the surge of cases outside mainland China and fears of a pandemic sent global markets into a tailspin.

Italy on Monday became the new frontline in the fight against the coronavirus with 220 cases reported from just three on Friday. The death toll in Italy stands at seven.

Kuwait, Bahrain, Oman, Afghanistan and Iraq reported their first new coronavirus cases, all in people who had been to Iran where the toll was 12 dead and 61 infected. Most of the Iran infections were in the Shi’ite Muslim holy city of Qom.

Outside mainland China, the outbreak has spread to about 29 countries and territories, with a death toll of about two dozen, according to a Reuters tally.