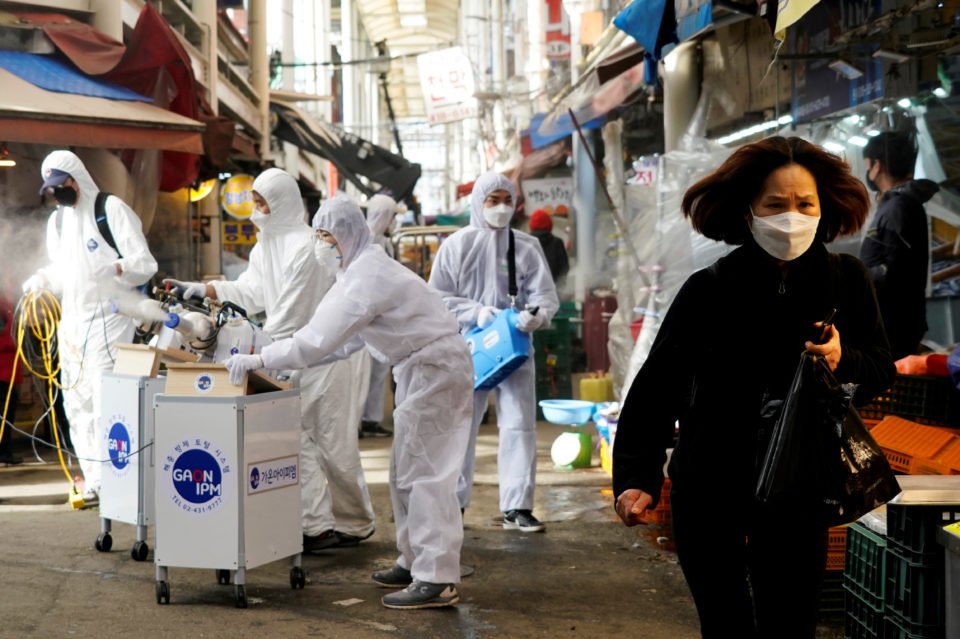 A woman wearing a mask to prevent contracting the coronavirus reacts as employees from a disinfection service company sanitize a traditional market in Seoul, South Korea

The number of new coronavirus infections inside China – the source of the outbreak – was for the first time overtaken by fresh cases elsewhere on Wednesday, as U.S. markets turned negative on fears over the rapid global spread of the disease.

U.S. health authorities, managing 59 cases so far – mostly Americans repatriated from a cruise ship in Japan – have said a global pandemic is likely. But President Donald Trump accused cable TV channels that frequently criticise him of “doing everything possible to make (the coronavirus) look as bad as possible, including panicking markets.”

Stock markets across the world have lost $3.3 trillion of value in four days of trading, as measured by the MSCI all-country index.

Wall Street reversed earlier gains on Wednesday afternoon on fears that the virus would spread across the United States, and oil prices dropped to their lowest level in over a year.

Health officials said dozens of people who had been in China were being monitored in suburbs of populous New York city.

“As of this hour, there are no confirmed cases of coronavirus in the city of New York,” Mayor Bill de Blasio said at a news conference, urging the federal government to tighten testing for visitors from a range of countries where the virus has been spreading. He added that its eventual detection in the city was “100% certain.”

The virus is believed to have originated in a market selling wildlife in the central Chinese city of Wuhan late last year. It has infected about 80,000 people and killed more than 2,700, the vast majority in China.

While radical quarantining measures have helped to slow the rate of transmission in China, it is accelerating elsewhere.

Germany, which has around 20 cases, said it was already impossible to trace all chains of infection, and Health Minister Jens Spahn urged regional authorities, hospitals and employers to review their pandemic planning.

“Large numbers of people have had contact with the patients, and that is a big change to the 16 patients we had until now where the chain could be traced back to the origin in China,” he said.

The World Health Organization (WHO) said China had reported 412 new cases on Tuesday, while there were 459 logged in 37 other countries.

However, WHO chief Tedros Adhanom Ghebreyesus advised diplomats in Geneva on Wednesday against speaking of a pandemic – which the WHO defines as the worldwide spread of a new disease.

“Using the word pandemic carelessly has no tangible benefit, but it does have significant risk in terms of amplifying unnecessary and unjustified fear and stigma, and paralysing systems,” he said. “It may also signal that we can no longer contain the virus, which is not true.”

The WHO says the outbreak peaked in China around Feb. 2, after measures that included isolating its epicentre Hubei province. It said only 10 new cases were reported in China on Tuesday outside Hubei.

Brazil’s first case was in a 61-year-old man in Sao Paulo who had recently visited Italy, a new front line in the global outbreak with 322 cases.

The diagnosis coincided with the carnival holiday, a peak time for domestic travel. Brazil’s stock index fell over 7%.

A hotel in Tenerife in Spain’s Canary Islands, was locked down over cases linked to Italy.

“It’s very scary because everyone is out, in the pool, spreading the virus,” said 45-year-old Briton Lara Pennington.

In France, a second person died – a teacher who had not visited any country with a known outbreak.

In Japan, Prime Minister Shinzo Abe called for sports and cultural events to be scrapped or curtailed for two weeks to stem the virus as concern mounted for the 2020 Tokyo Olympics.

Japan has nearly 170 cases besides the 691 linked to the Diamond Princess cruise ship that was quarantined off its coast this month.

There have been nearly 50 deaths outside China, including 12 in Italy and 19 in Iran, according to a Reuters tally.

While Iran has reported only 139 cases, epidemiologists say the death rate of around 2% seen elsewhere suggest that the true number of cases must be many times higher. Cases linked to Iran have been reported across the Middle East.