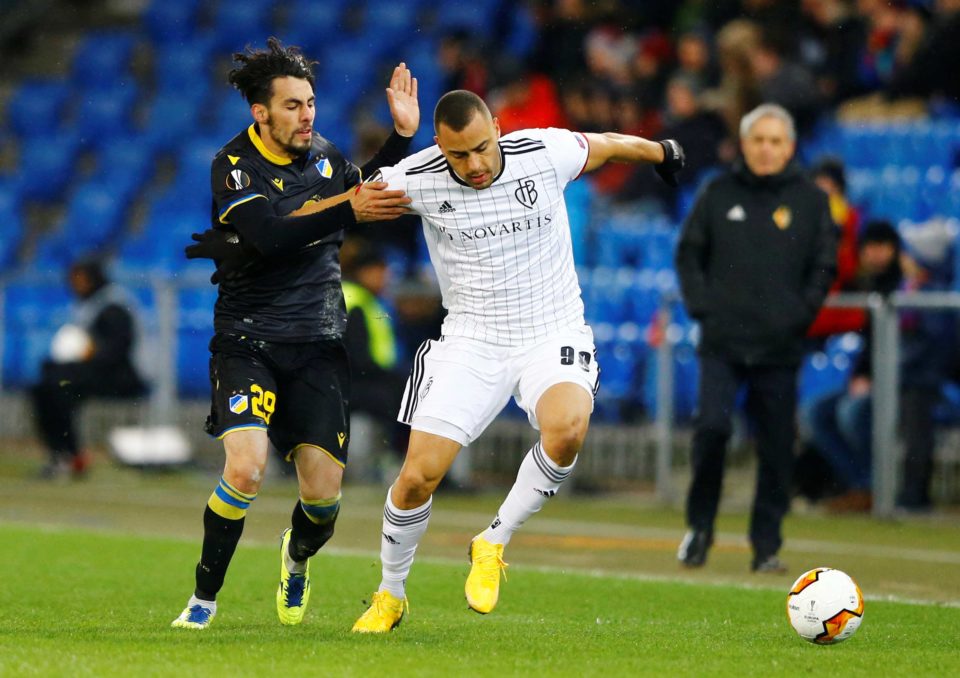 Apoel have been knocked out of the Europa League by Basel.

A 38th-minute Fabian Frei penalty gave the Swiss side a 1-0 victory on Thursday night at St Jakob-Park, and a 4-0 triumph on aggregate over the Cyprus champions in the round of 32.

Elsewhere in the tournament Arsenal suffered a shock Europa League exit to Olympiakos Piraeus on away goals after a 2-1 extra-time home defeat, while Manchester United and Wolverhampton Wanderers cruised into the last 16 with emphatic aggregate wins on Thursday.

The North London club were among several heavyweights who slumped out as the Portuguese trio of Benfica, Sporting and Porto as well as Ajax Amsterdam and Celtic were also eliminated from Europe’s second-tier competition in the Round of 32.

Arsenal had beaten Olympiakos 1-0 in the first leg and appeared to have done enough to squeeze through when Pierre-Emerick Aubameyang struck in the 113th minute to cancel out Pape Cisse’s 53rd-minute header which levelled the tie on aggregate.

But the visitors had the last laugh as Youssef El Arabi struck seven minutes later to delight the noisy contingent of away fans, with Aubameyang missing a gilt-edged chance to force another twist with the last kick of the game.

Manchester United breezed to a 6-1 aggregate win over 10-man Bruges after a 5-0 return-leg rout of the Belgians at Old Trafford, while Wolves advanced with a 6-3 overall victory against Espanyol despite a 3-2 second-leg defeat in Spain.

New loan signing Odion Ighalo celebrated his first start for United with his maiden goal for the club after Bruno Fernandes had fired the home side ahead with a 27th-minute penalty which also produced a red card for Bruges defender Simon Deli.

The centre back was dismissed after he dived in goalkeeping fashion to handle a Daniel James shot before Fernandes sent Simon Mignolet the wrong way with the spot-kick.

Scot McTominay made it 3-0 on the night with a fine first-time shot from 18 metres just before the break and Brazilian midfielder Fred put the icing on the cake with a late brace for United, who won Europe’s second-tier competition in 2016.

Wolves took a 4-0 first-leg lead to Espanyol and never looked in danger as Adama Traore scrambled in a close-range effort and Matt Doherty also scored as they twice cancelled out goals from Jonathan Calleri who scored a hat-trick.

Leverkusen blew Porto away with a 3-1 win on the road, after taking a 2-1 lead in Germany last week, thanks to goals from Lucas Alario, Kerem Demirbay and Kai Havertz before Moussa Marega netted a consolation for the home side.

Sporting exited after losing 4-1 at Istanbul Basaksehir following extra time to go down 5-4 on aggregate after Edin Visca gave the hosts a lifeline with a late goal in normal time and then netted a penalty to take them through.

Shakhtar Donetsk edged Benfica 5-4 on aggregate after a thrilling 3-3 draw in Lisbon, while Ajax endured a bittersweet 2-1 home win over Getafe which meant a 3-2 aggregate defeat against the Spanish side.

Celtic could not capitalise on a 1-1 first-leg draw at FC Copenhagen as they suffered a 3-1 home defeat, while Inter Milan strolled to a 2-1 home win over Bulgarians Ludogorets Razgrad to complete a 4-1 aggregate victory.

The match at the San Siro stadium was played behind closed doors as the authorities try to contain the coronavirus that has made northern Italy the focal point of the outbreak in Europe.

AS Roma, 1-0 winners against Gent in the first leg, looked to face a struggle when Jonathan David levelled the tie on aggregate after 25 minutes but Justin Kluivert eased the Serie A side’s nerves with a quick equaliser as they progressed.

Vfl Wolfsburg beat Swedish side Malmo 3-0 away to breeze through 5-1 on aggregate and FC Basel also advanced with a 1-0 home win over APOEL Nicosia for a 4-0 aggregate success.

LASK Linz were surprise 3-1 overall winners against Dutch side AZ Alkmaar after a Marko Raguz double helped the Austrians to a 2-0 victory.

Canada to stop providing security for Harry and Meghan