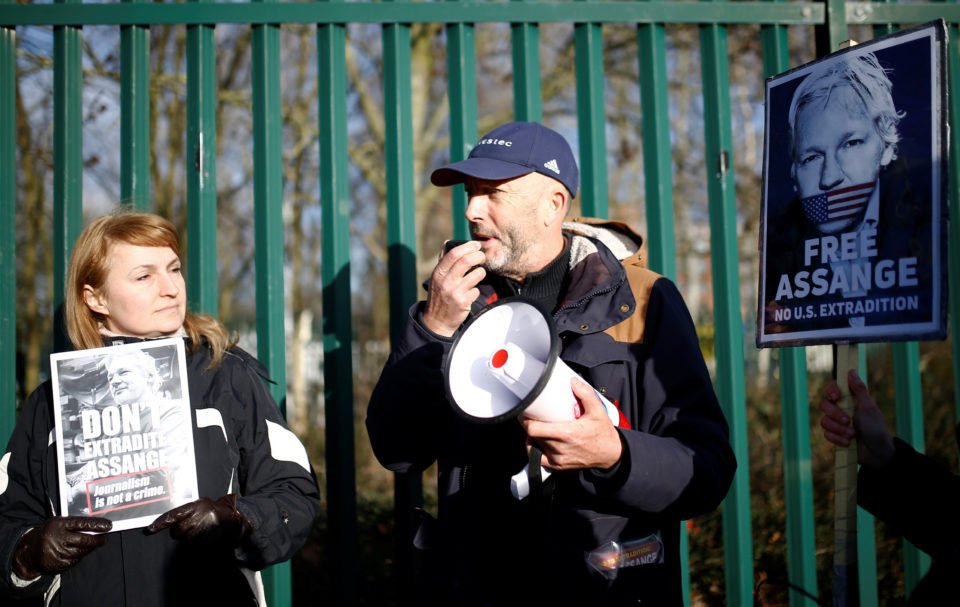 Supporters of WikiLeaks founder Julian Assange protest outside Woolwich Crown Court, ahead of a hearing to decide whether Assange should be extradited to the United States

The cost of being a whistle-blower is going up. When Daniel Ellberg stole and published the ‘Pentagon Papers’ in 1971, revealing the monstrous lies that the US government was telling the American public about the Vietnam war, he was arrested and tried, but the court set him free.

When Edward Snowden released a vast trove of documents in 2013 about the global electronic surveillance activities of US intelligence agencies, he was already abroad, knowing that civil liberties had taken a turn for the worse in the US since 1971. Snowden is still abroad seven years later, living in Moscow, because hardly anywhere else would be safe.

And Julian Assange, whose court hearing on a US extradition request began on Monday at Woolwich crown court in east London, is facing 175 years in jail if Britain delivers him into American hands. The American authorities are really cross about his WikiLeaks dump of confidential material in 2010 that detailed US misbehaviour in Iraq and Afghanistan.

Everybody knew or at least suspected that terrible things were happening there, but without documentation there was really nothing they could do about it. What Assange did was give them the evidence.

The most striking piece of evidence was a video and audio clip from an Apache helicopter gunship attacking civilians in Baghdad in 2007. The crew spray their targets with machine-gun fire, making comments like “It’s their fault for bringing their kids into battle” and “Oh yeah, look at those dead bastards.” They even target people in a vehicle that stops to help the wounded.

As for the claims of the US authorities that Assange has “blood on his hands” – that his 2010 data dump endangered the lives of some of those who were mentioned in the documents – there is not a shred of evidence that this is so. If anyone had come to harm over the past nine years as a result of his actions, don’t you think that the US government would have trumpeted it to the skies?

The whistle-blowers are among our last remaining checks on the contemptuous ease with which those who control the information seek to manipulate the rest of us. We don’t always respond to the whistle-blowers’ revelations as fast and as strongly as they would hope, but they are indispensable to keep the level of lying down. They should be praised, not punished.

So what are the chances that Julian Assange will escape extradition to the United States and a lifetime in prison? His lawyers will doubtless argue that nobody was harmed as a result of his revelations (except perhaps in their reputations for truthfulness) and that nobody profited by them. A British court might look unfavourably on an extradition request that is brought out of sheer vindictiveness.

The story that Donald Trump contacted Assange through an intermediary, former Congressman Dana Rohrabacher, might also help. Trump was allegedly offering to pardon Assange if the Australian would confirm that it wasn’t the Russians who gave him the Hilary Clinton campaign emails he released during the 2016 election campaign.

This has all been denied by both Rohrabacher and the Trump White House, but in carefully phrased ways that leave room for suspicion. Trump’s recent denial that he doesn’t know Rohrabacher and never spoke to him is especially suspect, since he invited the man to the White House for a one-on-one in April, 2017. British courts will not extradite if the request is politically motivated.

But Assange’s best chance probably lies elsewhere. During the seven years when he lived in Ecuador’s embassy in London as a political asylum-seeker, a Spanish security company called UC Global installed cameras in every corner of Assange’s space in the embassy and live-streamed every contact and conversation he had, including with his lawyers, directly to the US Central Intelligence Agency.

I don’t know how a British court will respond to that information, but I think I know how an American court would respond. That’s how Ellsberg got off in 1971: the government tapped his phone conversations (and sent burglars to break into his psychiatrist’s office and steal his file), so the judge dismissed the case because the government’s behaviour was outrageous and no fair trial was possible.

There will be many appeals, both in the UK and maybe later in the US, and Assange will not draw a free breath for a long time, if ever. But in the meantime, here’s one happy ending.

Edward Snowden couldn’t tell his girlfriend his plans before he left the US and released his documents, because that would have made her his accomplice. She was angry at first, but she forgave him, married him in 2017, and lives with him in Russia.