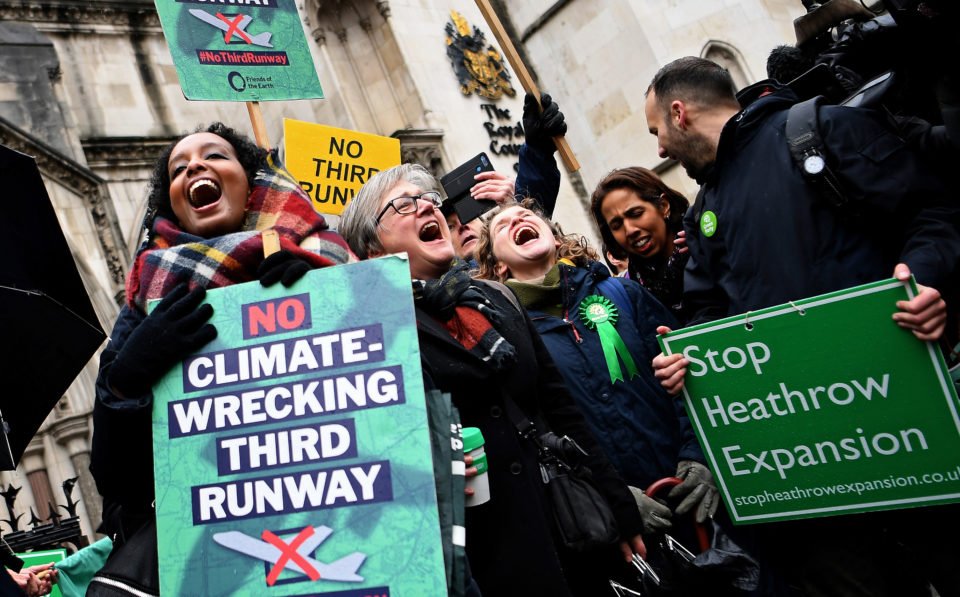 Environmental campaigners celebrate outside the High Court in London

The planned expansion of London’s Heathrow Airport was declared unlawful on environmental grounds by a court on Thursday, a ruling that could sink the $18 billion project that has been dogged by decades of dispute and indecision.

In a victory for climate change campaigners, an appeal court judge said that a failure to take into account the government’s commitments on climate change was “legally fatal” to the plans to build a third runway at Europe’s busiest airport.

Prime Minister Boris Johnson has been a vociferous opponent of the expansion, which was approved under the previous government. During last year’s election campaign, he said he would have to find some way of honouring an old promise to lie down in front of bulldozers at Heathrow to halt the plans.

The government said it would not appeal the ruling, raising questions about the future of a project which has been hotly debated in Britain for almost half a century.

In order for the new runway to now proceed, the Department for Transport would need to amend its policy statement, but it was silent on the matter on Thursday.

“We take seriously our commitments on the environment, clean air and reducing carbon emissions. We will carefully consider this complex judgment and set out our next steps in due course,” Transport Minister Grant Shapps said.

Heathrow and its supporters argue that Britain’s exit from the European Union makes the expansion project critical to ensuring the country can increase trade with the rest of the world. The planned third runway would be the first full-length runway built in the London area for 70 years.

Heathrow is the United Kingdom’s biggest port by value, accounting for 40% of exports in 2019, but its two runways are operating at full capacity, and the airport will in two years be eclipsed as Europe’s busiest by Paris, after previous attempts to expand it failed.

Ten years ago, a plan for a new runway was scrapped, before a government-appointed commission carried out a three-year study which again recommended the expansion in 2015, giving rise to the latest project.

The judge said that in its current form the government’s policy failed to take into account climate change commitments made by the government when it signed up to the Paris Agreement in 2015.

“That, in our view, is legally fatal to the ANPS (Airports National Policy Statement) in its present form,” said judge Keith Lindblom. The government will now have to rework the policy if it wants it to go ahead, he added.

Heathrow Airport, owned by Spain’s Ferrovial, the Qatar Investment Authority and China Investment Corp, has said that it will appeal the decision in the Supreme Court, even though the government is not.

“This is not the end of the road. This is very fixable,” CEO John Holland-Kaye told Sky News on Thursday.

Heathrow believes that a recently launched UK aviation industry plan to reach net-zero carbon emissions by 2050 will help it see the decision overturned.

Environmental campaigners such as Friends of the Earth and Greenpeace, and the local authorities who oppose the expansion were delighted with the ruling, saying the recognition of climate change commitments could have consequences for other projects.

“This judgment has exciting wider implications for keeping climate change at the heart of all planning decisions,” said Will Rundle, Friends of the Earth’s head of legal.

Under the 14 billion pound ($18.2 billion) expansion plan, Heathrow‘s new runway would open in 2028. Should it be scrapped, airlines and business groups will be seeking answers on where new capacity can be added as Britain’s second busiest airport, Gatwick, south of London, is also full in the summer months.

In 2014, Johnson favoured a 112-billion-pound plan to build a new airport in the Thames Estuary, but the Airports Commission rejected it as being too expensive, risky and complicated.

“The government must show leadership, back expansion, and ensure that the UK gets the sustainable airport capacity it needs to retain its place as a global trading nation,” said IATA’s CEO and director general Alexandre de Juniac.