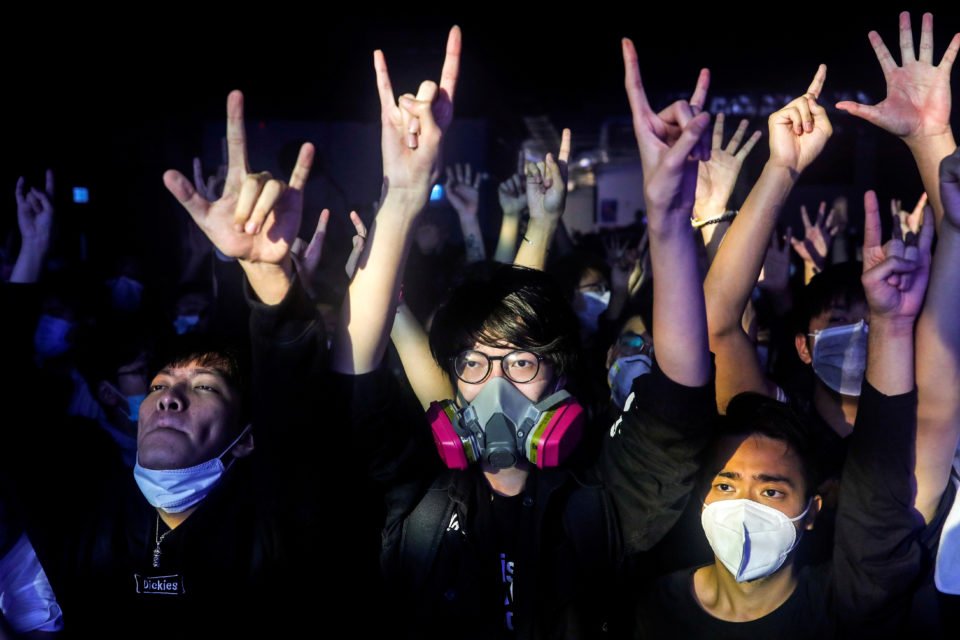 Fans wearing protective masks at a concert in Hong Kong

Q: As there have been no confirmed cases of Covid-19 reported in Cyprus, does it mean that the risk of imported cases on the island is decreasing?

A: China’s stringent epidemic prevention and control measures are not only for the health and well-being of its own people, but also to maintain global public health security and gain valuable time for other countries and regions to overcome the epidemic. So far, there has been no confirmed case reported on the island thanks to China’s effective measures to curb the spread of the epidemic, close cooperation for joint prevention and control between China and Cyprus, and the strict implementation of personal protection and self-regulation measures by the overseas Chinese in Cyprus as required by the Cypriot side and the Chinese embassy. However, the inflection point of the epidemic has not yet arrived due to the rising number of confirmed cases in some specific provinces and autonomous regions in China, as well as the rebounding number of confirmed cases in some countries such as Japan, South Korea, Italy and Iran. Although the island is relatively safe, the risks are still there and vigilance should be taken. Be patient and protect yourself well by exercising self-discipline and preventive measures to keep your family, your friends and yourself safe.

Q: Some Asian friends said they were asked by locals if they were Chinese infected with coronavirus after they coughed a few times while smoking outside a restaurant on the island. Is there any discrimination against Chinese because of the epidemic?

A: It is natural that the Cypriot people are concerned about the epidemic. With the effective results of China’s prevention and control measures and the deepening cooperation between China and Cyprus in this regard, the Cypriot people will have a more rational and objective understanding of the epidemic with reduced anxiety. In general, the Cypriot government and public have shown their rationality and objectivity when responding to the epidemic. Unlike in some western countries, there have not been anti-China phenomena in Cyprus due to the epidemic, which shows the good self-cultivation of the Cypriot people. House president Demetris Syllouris has reassured the Chinese in Cyprus that they will not be blamed or discriminated against because of the epidemic. Many locals have also volunteered to make donations to China, and to help the Chinese who quarantined themselves at home buy daily necessities. I am sincerely grateful for this. The virus has no borders. In the face of the epidemic, only mutual understanding and support can overcome the difficulties. China and Cyprus have set a good example for other countries in this regard.

Q: Recently we have seen some US and European media hype the so-called ‘leaked document from Xinjiang’ or ‘Karakax List’. What do you think of such hype surrounding Xinjiang in the context of China combating the epidemic?

A: My professional experiences tell me that when I’m reading ‘news’ from some US or European media a question mark or a reverse look may lead to the right conclusion. In fact, the vast majority of the over 300 people mentioned in the ‘Karakax List’ have been working and living their normal lives. Only a few individuals who have been exposed to religious extremism and have committed minor crimes have received vocational training based on laws. The only criterion for Xinjiang Education Center to determine the target subject is to see if he or she had terrorist or religious extremist acts or committed a crime. The criterion has nothing to do with which the ethnicity or religion the person belongs to or believes in. At present, all the trainees at the vocational training center have completed their training and have stable jobs with the help of the government. I hope that the fake news makers in the west will not keep disturbing the normal and happy lives of the trainees.

Q: The Taiwanese authorities have recently claimed that the Chinese government is not humane by stopping it from joining the World Health Organization. What’s your opinion on this?

A: I would like to mention three points: First, since the outbreak of coronavirus, the Taiwan DPP (Democratice Progressive Party) authorities have not done anything practical or meaningful except their active political manipulation. What qualifications does Taiwan have to become a member or observer of WHO that only a sovereign country can join? Second, the arrangements reached between China and WHO can fully ensure that the Taiwan area responds to any public health emergencies in a timely and effective manner. The National Health Commission of the People’s Republic of China informed the Taiwan area of the epidemic in a timely way, and groups of Taiwanese medical experts have visited Wuhan for on-site inspections and expertise exchange. Third, the Chinese and Cypriot governments and their peoples have a broad consensus on the One-China Principle and One-Cyprus Principle. Both are very clear about DPP’s tricks of manipulating One-China Principle in the disguise of the epidemic.

Q: Recently, the number of Covid-19 confirmed cases has surged in countries close to Cyprus, such as Italy and Iran. How do you see this situation?

A: The facts further show that the epidemic is the common enemy of all mankind, and prevention and control of the epidemic is a common challenge faced by all countries. In the early stage, China adopted comprehensive and strict prevention and control measures, which was a huge self-sacrifice, and gained useful experience as well as valuable time for global actions. Countries like Italy are taking similar measures to restrict personnel mobility and even lock down cities. China is willing to share experiences with and provide assistance for other countries within its capability. In fact, China is doing so right now.

A minute with Michalis Asimakis Creative Director of Atelier Asimaki