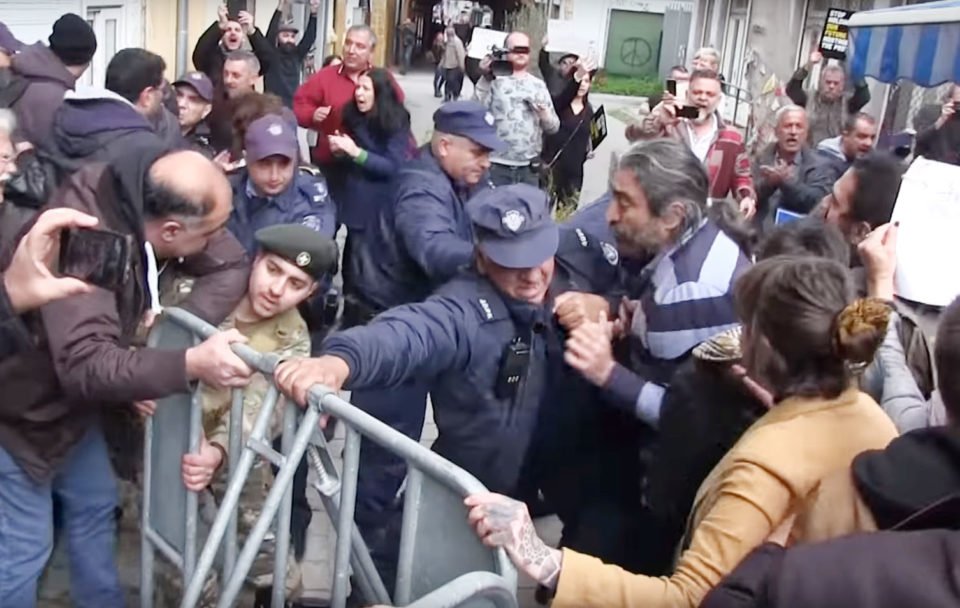 Police said on Saturday evening they would examine video footage from a protest at the shuttered Ledra Street crossing earlier in the day for possible criminal offences in connection with scuffles that broke out when some demonstrators barged through the barricade to the north.

Video footage showed police trying to push a protester back after he removed the barricade. Another grabbed a national guardsman who was also stationed there.  The man was only stopped by another, who intervened to break the two apart.

Police spokesman Christos Andreou on Saturday evening the footage captured in the video would be looked into, and that the justice minister has been informed, indicating that there could be arrests.

Commenting, he said: “Such incidents are unacceptable, and the police will show zero tolerance.”

A statement shortly afterwards from Justice Minister Giorgos Savvides said that although he was currently abroad he was closely watching the situation in consultation with the defence minister.

“From the very first moment, I gave explicit instructions to the chief of police to immediately investigate the attack on the national guardsman. I find it unacceptable to attack anyone who is acting in the service of law and order. Those who commit such acts must immediately face justice,” Savvides said.

The scuffles between authorities and protesters broke out around lunchtime at the  Ledra Street checkpoint, due to the temporary closure by the government as part of measures to prevent a potential spread of coronavirus.

Scores of people gathered at noon on both sides of the divide to protest. They held placards saying ‘Enough’ and chanted reunification slogans.

Tensions rose as some protesters on the south side of the crossing pushed against the police barricades and shoved their way through officers who attempted to stop them from crossing to the north.

He questioned: “Why didn’t they do this during the swine flu outbreak?”

Another protester said: “We believe that neither Nicosia nor Cyprus should be divided, and the right to free movement should be guaranteed.”

After getting through the barricade, another protester said: “The moment we accept to close the internal roads within the country, we ourselves agree and accept that this country should be divided.”

Protesters further said they are not against authorities and taking measures against a virus, but that any measures should be taken together.

“Don’t touch the crossing points,” one protester said emphatically after the barrier was barge through.

He said: “Coronavirus risk is valid for both communities. However, there is a common health committee to decide on this issue. It is necessary to produce the solution together.”

Announcing the protest on social media, bicommunal NGO #UniteCyprusNow characterised the government decision to temporarily close four out of seven checkpoints as “an insult to our intelligence”.

US and Taliban sign deal to end 18-year Afghan war

Political parties, other than Elam, say closing crossings is a mistake