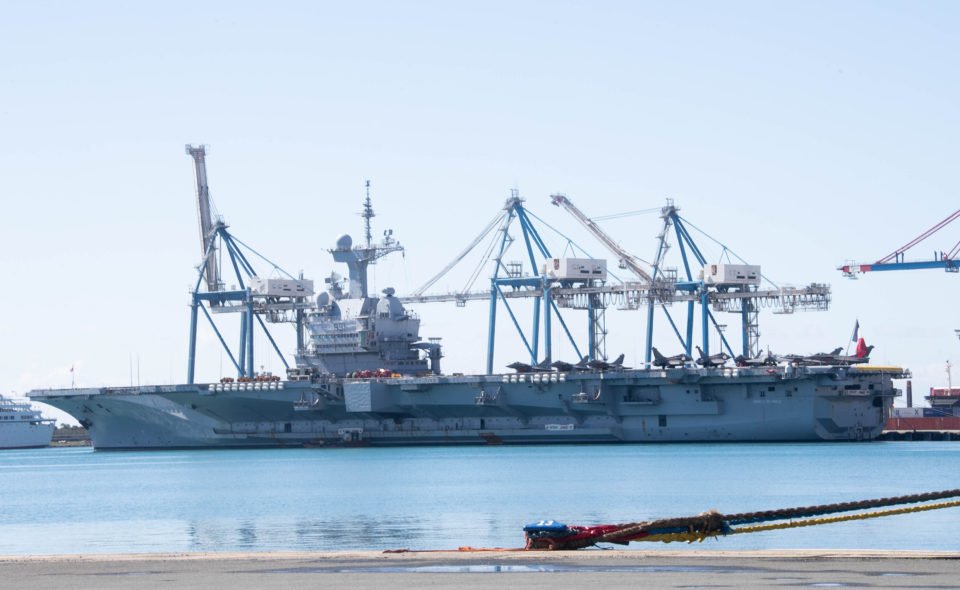 THE aircraft carrier Charles de Gaulle was at the port of Limassol last week. Her sailors disembarked on shore leave to drink and have fun as sailors do after the privations of life at sea.

The last time I remember French sailors on shore leave in Limassol was as an 8-year old lad during the Anglo-French operation to retake the Suez Canal in 1956 when they visited Cyprus en route.

We were living in a street just down from the Holy Trinity Church (Ayia Triada) not far from the seafront promenade where I remember them complete with their French sailor’s hats red pompom atop, which left an indelible impression on me.  I remember the visit well and memories still linger of the sound of spoken French – always easy on the ear – and the exotic smell of French cigarettes. As Maurice Chevalier would sing two years later in the film Gigi “Ah yes I remember it well”, even if some memories evoke an uncanny sense of déjà vu.

What caused the Suez crisis was that Britain, France and Israel attacked Egypt after President Nasser of Egypt nationalised the Suez Canal.

Ferdinand De Lesseps built the canal between 1859-1869 and France owned it together with the Khedive – Ottoman Viceroy – of Egypt until he went bankrupt and sold his 44 per cent shareholding to the British government.

Britain then removed him from power and by 1882 took de facto control of Egypt and the Sudan. She had already taken de facto control of Cyprus in 1878. Britain was at the height of her imperial might at the time, the Ottoman Empire in a state of gradual collapse, and Cyprus swept-up in the process.

The opening of the Suez Canal had a huge effect on world trade. It linked the eastern Mediterranean to the Red Sea, which facilitated trade with India and the Far East. It later became a conduit for the transportation of oil from the Gulf to Europe and America that has now been enhanced by the discovery of hydrocarbon wealth in the eastern Mediterranean.

The plan to attack Egypt in 1956 was hatched in secret in London and Paris. Israel would attack Egypt, whereupon Britain and France – each more avaricious than the other – would intervene, posing as peacemakers and retake the Suez Canal.

The operation failed because America did not play ball and Britain and France were forced to withdraw in ignominy. It was a pivotal moment that symbolised the end of empire for both Britain and France and the rise of America and Soviet Russia.

British Prime Minister, Anthony Eden, had a nervous breakdown and repaired to the West Indies to recover. He resigned shortly afterwards. As he was later to concede the Americans were not Britain’s best friends in the Middle East.

Egypt came under Russian influence, and Israel moved in pole position. Disgraced and humiliated, the old colonial dinosaurs gave way to America and Russia until 1989 when the Soviet Union collapsed and America became the only super power.

But as the French people say plus ça change, plus c’est la même chose. America has had enough of the Middle East. Under Trump she has reconfigured her relationship with the region in purely transactional terms.

So, Britain and France are back in business – out of hibernation more like. The British never really left. They retained two sovereign bases in Cyprus and have power and influence in the Gulf. The Russians are back big time in Syria but elsewhere too. The Ottomans Turks are back too. Even as we speak, they are engaged in military operations in Syria that have the potential to bring them into conflict with their traditional foe Russia – watch this space.

As for France, she is now the EU’s only nuclear power with a military reach capable of protecting the EU’s southern flank – hence the presence of her aircraft carrier in Limassol.

Unfortunately, the visit of the Charles de Gaulle ended with another tragic a déjà vu event.

A 19-year-old female member of the crew of the carrier tragically fell to her death from a fifth-floor balcony of a Limassol hotel early last Monday.

We have been here before.  A young woman falls to her death from a balcony in Limassol early in the morning.  The local police are on the case and quickly conclude that she drank too much and fell to her death. Ring a bell?

A Russian young woman died in uncannily similar circumstances in 2001 and there was a cover up until the European Human Rights Court decided that there had been a procedural violation of her right to life by Cyprus because the police did not conduct an effective investigation into her death.

To be fair to the Limassol police, the Russian woman fell to her death in 2001 and she was not a sailor on shore leave.

The hope is that the police, presumably with the assistance of the Maritime Gendarmerie, will properly investigate the tragic death of this young sailor. It is well known that sailors on shore leave drink a lot, but it does not follow at all that she fell because she was drunk.  Accidents do happen and the fall from the hotel balcony may just be a tragic coincidence but there is no excuse for the police going public on the cause of death and to attribute it to the demon drink without a proper investigation of the circumstances first out of respect to her memory.

Remember although the case of the tragic death of the Russian woman is closed, the jury is still out on whether anyone believes that she was drunk when she tried to escape false imprisonment and slave labour.