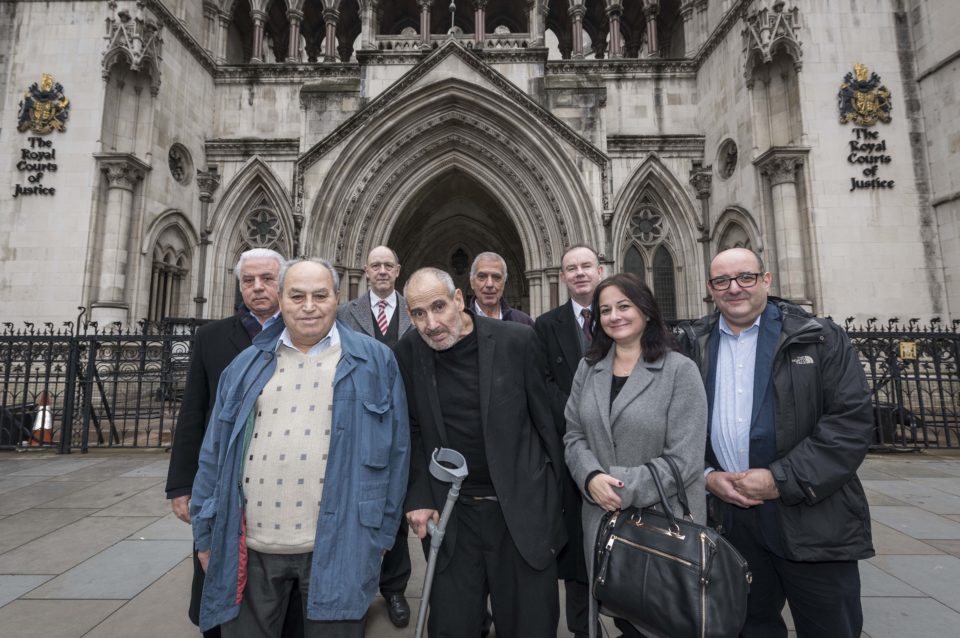 Kevin Conroy (third from right), Ex-Eoka fighters and family members and other members of the legal team after their victory last yea Solicitors and claimants family and friends after the judgement..

The British law firm which took on the might of the British government and delivered 33 elderly Greek Cypriots long-awaited recompense has been nominated for a prestigious award.

In what has been described as a David and Goliath battle, KJ Conroy & Co – a Birmingham firm of solicitors – fought on behalf of Greek Cypriots who suffered abuses during the British colonial government’s crackdown during the 1955-59 Eoka campaign.

Their case began in 2015 and ended with an out-of-court settlement of one million pounds in 2019.

Befitting the nomination by the Law Society in the UK for ‘Small law firm of the Year’, KJ Conroy & Co is comprised of just two solicitors and one graduate historian.

“Claims such as these are usually conducted by large law firms with deep pockets,” Kevin Conroy said.

The path was paved for the Cypriots after a successful case by 5,000 Kenyans won damages for torture and abuse during the Mau Mau uprisings in the 1950s.

The unlikely tale of a tiny Birmingham practice began when Kevin Conroy was working on an international property dispute in Cyprus.

During his visit, it was announced that thousands of classified top secret documents were to be released which could shine new light on similar allegations of torture during the Cyprus Emergency in the 1950s.

Conroy’s passion for the case was ignited after speaking to two of the Eoka victims.

“I always believed in this case, as did the many other people who became involved,” he said. “Everyone gave their time in the full knowledge that if the claim had failed, they would not be paid for their work.”

Conroy managed to persuade the British government to grant him access to the classified files. What followed was a series of visits to the secretive Hanslope Park, owned by the Foreign and Commonwealth Office, located near Milton Keynes.

“We weren’t even allowed to the toilet without supervision,” said Conroy. “This was unprecedented access to files which had remained buried in a secure archive for over 60 years in some cases.”

Conroy’s firmed described the case as an attempt “to putting right a historic wrong” – at least in part.

For those who lived through the troubled times, and still suffer from their experiences, the case was bittersweet.

“What are we going to do with the money at our age? What we want is an apology,” said 86-year-old Thassos Sophocleous, the lead claimant said after winning the case.

“We have nothing against the English now, it is history, but if the Germans can say sorry, the English should say sorry too.”

At the time of the settlement, then minister of state for Europe, Sir Alan Duncan said “it is a matter of regret for the UK government that the transition of Cyprus from British administration to independence should have been preceded by five years of violence and loss of life, affecting all residents of the island.”

If that fell short of an apology, it was certainly a victory of sorts.

Observers said some of the allegations were so incendiary that a flare up in the media could have been a disaster for the British government, especially if they were seen to be fighting the case.

“In this matter, where torture was certainly involved, the government would rather not see this case see the light of day,” said British Labour MP Bambos Charalambou.

“I am very glad it (the government) finally saw sense and settled what would have been a very embarrassing situation had the case continued through the courts.”

Of the 33 Greek Cypriots, most now in their 80s, two were women who claimed they were raped and beaten.

“When there are living survivors of torture by any state on the planet, the press have a ready-made story which the government have no moral way out of,” said Charalambou.

Other abuses ranged from waterboarding to mock hangings, claims supported by military historian Dr Brian Drohan, author of ‘Brutality in an Age of Human Rights’.

Drohan argues that during the Eoka struggle against colonial rule in Cyprus from 1955 to 1959, the British government “had free reign to commit torture with minimal oversight”.

Drohan said torture was primarily carried out by Special Branch agents “who committed these brutal acts as part of a calculated effort to obtain intelligence on Greek Cypriot insurgents”, acts that senior officials in Cyprus and Whitehall knew about and condoned, he said.

The law firm highlighted that the timing of the case came just at the right time.

“During the course of the litigation, four of the claimants died and a further four lost mental capacity,” the firm, KJ Conroy & Co, said in a statement.

Everton and United play out draw, Wolves win at Spurs