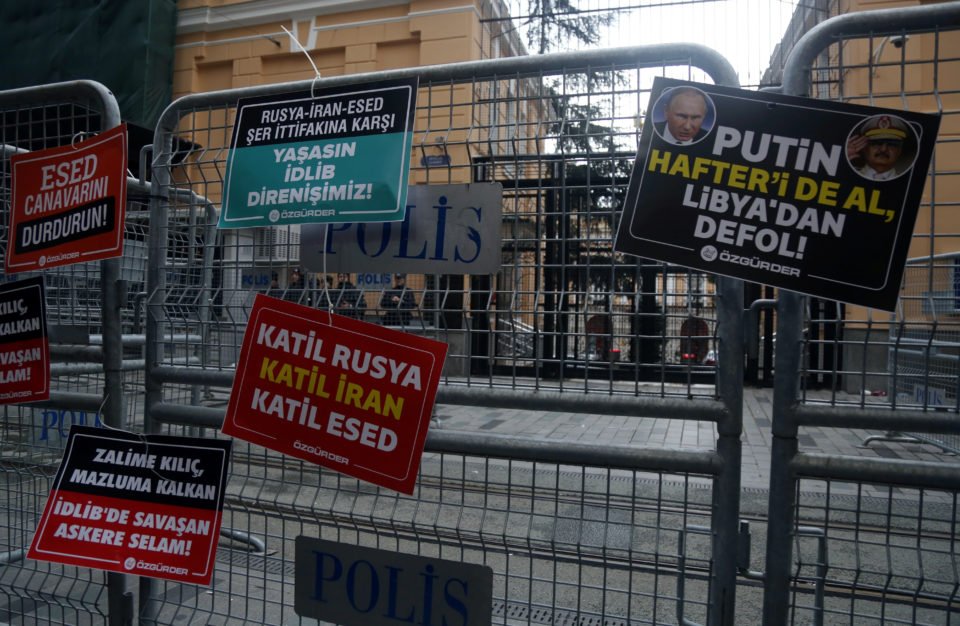 Placards are attached on security barriers outside the Russian Consulate following a protest against killing of Turkish soldiers in Syria's Idlib region, in Istanbul, Turkey

By Ali Kucukgocmen and Ellen Francis

Turkey said on Sunday it had destroyed air defence systems, more than 100 tanks and downed two planes belonging to the Syrian army as part of an operation it launched after an air strike killed dozens of its soldiers last week.

Diplomatic efforts by Ankara and Moscow to defuse tensions have so far fallen short of achieving a ceasefire in the Idlib region of northwest Syria, the country’s last major rebel stronghold after nine years of civil war.

Ankara has ramped up its attacks, including drone strikes, against the Syrian army since Thursday, when 33 Turkish soldiers were killed in an air strike by Damascus. Another soldier was killed on Friday, bringing February’s death toll to 55.

Syria’s army warned on Sunday it would take down any planes or drones breaching the air space over the northwest, which has been controlled for years by its ally Moscow.

“We have neither the intention nor the notion to face Russia. Our only intention there is for the (Syrian) regime to end the massacre and thereby prevent, stop radicalisation and migration,” Turkish Defence Minister Hulusi Akar said.

Akar added that 2,212 members of the Syrian forces had been “neutralised”, a term used to designate killed, wounded or captured. The Syrian Observatory, a Britain-based war monitor, said 74 Syrian government troops and pro-Damascus fighters had been killed since Feb. 27.

Turkey’s Defence Ministry said one of its drones had been downed on Sunday and that it had shot down two Syrian planes. Syrian state news agency SANA said the pilots escaped in parachutes and were fine.

Turkish Foreign Minister Mevlut Cavusoglu said on Saturday that while there was progress in talks between Turkish and Russian delegations, the Idlib issue would only be resolved between presidents Tayyip Erdogan and Vladimir Putin.

One senior Turkish official and one security official said the meeting would be held on Thursday in Moscow. The officials said the two would discuss steps to take in Idlib and that they were expected to reach a mutual agreement.

The latest bout of fighting in Idlib has uprooted one million civilians since December, many of them women and children fleeing towards the Turkish border.

Turkey, which hosts 3.7 million Syrians, said it would allow migrants to cross into Europe in anticipation of an imminent new migrant influx from Idlib, lifting restraints on movement in place since 2016 under a deal with the European Union.

Greece placed its borders on maximum security footing on Sunday after hundreds of migrants used porous crossing points to enter the country from Turkey, with thousands behind them seeking entry after Ankara’s relaxation of policy.

Turkey’s borders to Europe were closed to migrants under an accord between the Turkish-EU deal that halted the 2015-16 migration crisis, when more than 1 million people crossed into Europe by foot.

Time to enjoy the garden