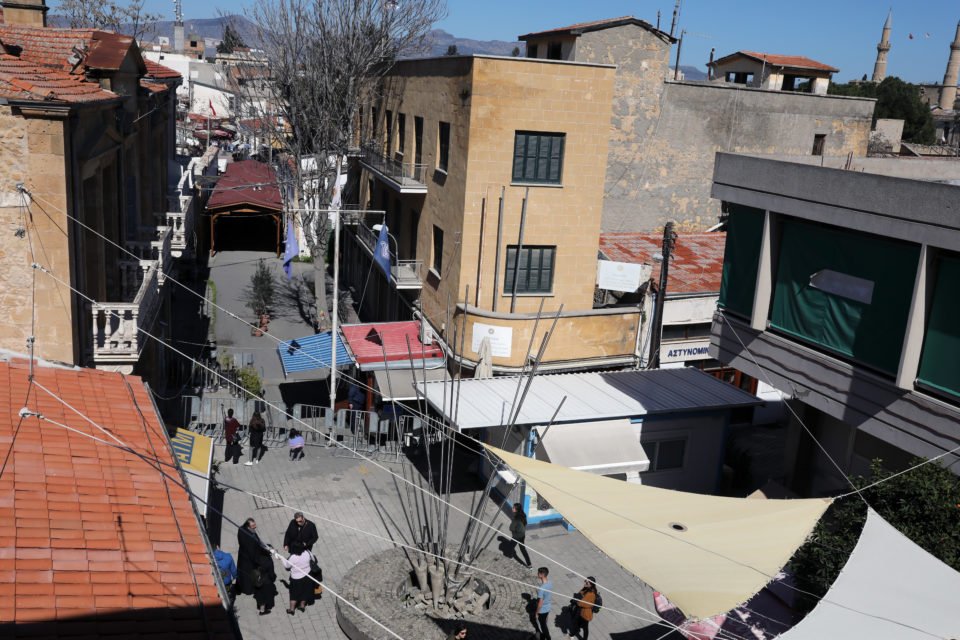 The crossing point at Ledra Street was closed on Saturday (CNA)

The Bicommunal Technical Committee on Health will meet on Tuesday to discuss the island’s measures against the spread of the coronavirus, it was announced in the north on Monday.

The announcement came from the office of Turkish Cypriot leader Mustafa Akinci.

The meeting is to take place at 2pm, the announcement said, also mentioning the meeting would be the committee’s third since the two leaders instructed its members to work on joint measures at a meeting which they had on February 3. The committee will resume work on the joint struggle launched against the spread of the coronavirus or Covid-19, it said.

It added that Akinci on Sunday had urged President Nicos Anastasiades to re-evaluate his decision to shut four crossings, those of Ledra street, Astromeritis, Lefka and Dherynia, and for efforts to introduce joint measures against the virus to be taken up by the Technical Committee on Health. The government announced on Friday that the four crossings would be closed for seven days as part of measures to prevent the spread of coronavirus while more staff would be sent to the remainder to help better screen those crossing between the two sides.

“He had pointed out that the decision to close the crossing points had no scientific basis,” the announcement from Akinci’s office said, reiterating that the committee had agreed to take measures not at crossing points but at all ports and points of entry into the country.

The issue was also discussed in ‘parliament’ in the north on Monday with the majority of ‘deputies’ attributing the decision to economic reasons and not to protect public health. ‘Foreign Minister’ Kudret Ozersay said that the decision was aimed at preventing cash flow from the south to north.  He said he has contacted foreign missions in Cyprus on the matter and sent letters to the EU. ‘Prime Minister’ Ersin Tatar too said the crossings were closed for economic reasons.

Akinci on Sunday expressed the hope that the “mistake of closing four crossing points” would be corrected.

The Turkish Cypriot leader had spoken Anastasiades on Saturday about the situation the closure has caused at Ayios Dhometios, where long queues were waiting to cross in both directions.

Akinci wrote on Facebook that in his telephone conversation with Anastasiades he had referred to the “chaotic” situation created at Ayios Dhometios, which he said was equivalent to “torture” and had nothing to do with the coronavirus.

“I said the virus is an issue for both communities and this must stop as soon as possible,” Akinci said.

He said that Anastasiades had then called him back and said the checking of IDs for all those returning to the north would stop.

“This of course is one step in the right direction and the correction of the mistake on this issue is a good development. I hope the mistake of closing four crossing points will also be corrected soon,” Akinci said.

The closure of the four crossings was met with suspicion by some who were not convinced by the government’s reassurances this was only a temporary measure.

Government spokesman Kyriacos Kousios on Sunday reiterated that the only reason for the closure of the crossings was preventive measures against the spread of the Covid-19.

“All the necessary efforts are being made by the government to reopen the crossing points as quickly as possible,” Kousios said. He recalled that the situation is being evaluated daily.

A bicommunal protest by several groups at the Ledra Street crossing on Saturday against its closure over fears of the spread of Covid-19, led to scuffles after some protesters barged through the barricade to the north. A 55-year-old man was arrested on Sunday in connection with the incidents after admitting to pushing a national guardsman during the scuffles.

In a joint statement, 74 organisations from both communities that have mobilised against the closure of the crossings, said that the protest started and ended peacefully but that a single moment of tension between a protester and a young National Guard recruit was highlighted “in order to demonise the entire peace movement and silence the ordinary citizens acting to defend our rights.”

They added that the 55-year-old who reacted “in the heat of the moment” apologised to the recruit and went voluntarily to the police station to give a statement. The charges brought against him, the group said, was “as a sign of the government’s intention to spread fear among the people who simply ask for their rights to be respected.” They also called for measures for the protection of the man and his family who have been subjected to online harassment and threats.

The group accused the government of waging a media war in order to avoid taking responsibility for the mess they created but also of ordering the military to do the job of the police.

“Who ordered the fully armed inexperienced young recruits, our own children, to face their own people? Is this the country we want to live in where peaceful protesters are faced with armed recruits?” the group asked.

They call on the European Commission to intervene immediately to protect the Green Line Regulation as well as the democratic rights of the European citizens for peaceful assembly.

The also called on the government “to take responsibility for the mess they have created and open all crossing points immediately, cancel any new measures that are introduced to harass people at the crossing points.”