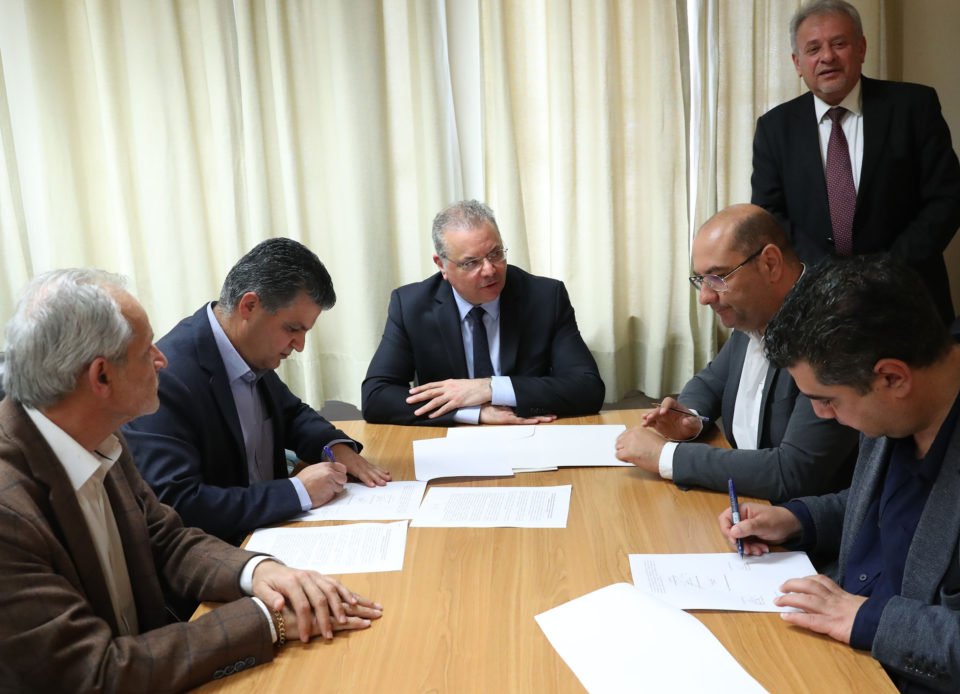 The deal being signed on Tuesday

The government on Tuesday inched closer to its ambitious plan to overhaul local government, signing an agreement with municipalities guaranteeing job and pension security for municipal employees.

The deal was struck between the interior ministry, the Union of Municipalities, and the SEK and PEO trade unions.

He said the agreement would be an integral part of the government bills on local government reform to be submitted to parliament.

Under the government plan, 17 new municipal clusters are to be created from the merger of the existing 30 municipalities: four in Nicosia, four in Limassol, four in Larnaca, three in Paphos and two in Famagusta.

Thirty municipalities and 48 local communities will be merged, which means 83 per cent of the population, 700,000 residents, will now be part of a municipality, compared to 71 per cent currently.

The deal concluded on Tuesday covers four main points. First, no municipal worker will be sacked as a result of the implementation of the reform.

Second, all employees’ work-related and pension benefits are fully guaranteed.

Third, should the need arise to redistribute and/or reduce staff in certain services, these changes will be subject to talks between the interior ministry and the relevant trade unions.

Fourth, during the transition phase the ministry and the trade unions will work together on consolidating the disparate collective agreements currently in place.

Chairman of the Union of Municipalities Andreas Vyras said this was not the end of the road as certain issues still need ironing out and will require further negotiations.

Over the next few days, a dossier will be produced providing a synopsis of what has been agreed, and what’s pending.

Vyras hastened to add, however, that any remaining disagreements on isolated points would not necessarily constitute a deal breaker.

The government has drafted bills amending the governing legislation that consists of the Municipalities Law and the Communities Law. It aims to conclude the current consultations round as swiftly as possible, so that the cabinet can ratify the bills and table them to parliament inside the month of March.

The goal is to ‘lock in’ the new legislation to avoid the issue being dragged out to coincide with the election campaign for the 2021 local government ballot, where it is certain to get politicised.

But there still remain some matters that could prove troublesome to the whole endeavour. These are expected to be decided politically, based on the balance of power inside parliament where the bills will be discussed.

It’s understood most parties oppose this clause, and the government will need to marshal all its arguments to convince them that holding the 2021 elections would only serve to disrupt the reform undertaking.

Another sticking point: as they stand the bills do not provide for plebiscites, thus denying residents of individual communities a say in whether they get absorbed into a municipal cluster.

Main opposition Akel, the Greens and Solidarity want plebiscites, whereas ruling Disy and Diko do not.

Last but not least, of the some 50 communities earmarked for a merger, around half of them have raised objections.

During a meeting with President Nicos Anastasiades last week, the Union of Cyprus Communities appeared to have extracted a promise that the envisioned municipal clusters are not set in stone and that certain minor modifications are possible.

But according to daily Politis, the interior ministry is adamant that the blueprint must not be tinkered with.