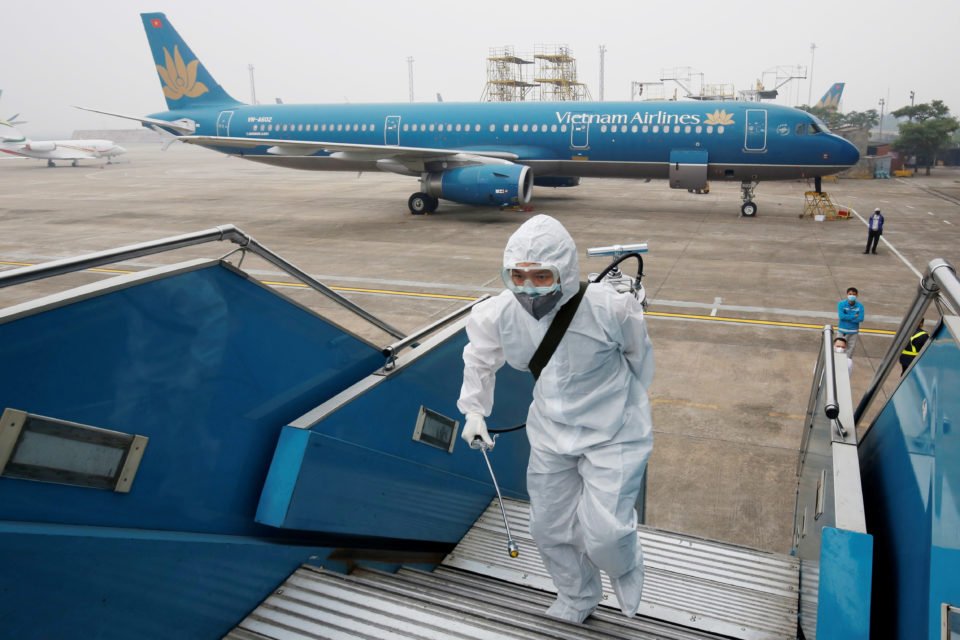 A health worker sprays disinfectant inside a Vietnam Airlines airplane to protect against the recent coronavirus outbreak, at Noi Bai airport in Hanoi, Vietnam

Ryanair expects April and May bookings to fall 10% due to the coronavirus outbreak, dealing a “meaningful impact” to quarterly earnings, but its Chief Executive Michael O’Leary said on Tuesday the situation will stabilise by early summer.

The Irish airline, Europe’s largest low-cost carrier, said on Monday it would cut 25% of its Italian capacity for three weeks but it was far too early to speculate about earnings from the next financial year, which begins April 1.

Asked about the prospects for earnings in the three months to June 30, the first quarter of Ryanair’s financial year, O’Leary on Tuesday said “there will be a meaningful impact.”

“At the moment we’re expecting a 10% decline in bookings through the months of April and maybe May. We could be down about 2 million passengers over that period,” O’Leary told Reuters on the sidelines of an annual industry conference.

“But that I think would be about the extent of it,” he added, saying that once temperatures begin to rise in Europe in May and June “the hysteria about the spread of the COVID virus will have calmed down again.”

Ryanair has followed rivals like British Airways, easyJet and Wizz in warning about cancellations and reduced profits due to the outbreak, which emerged in China in late December and has spread to more than 50 countries.

O’Leary said his airline has not yet responded with cheaper pricing but it would stimulate the market if necessary closer to the summer.

He hinted that the crisis would have some upsides for Ryanair, reducing pressure from the delayed delivery of Boeing 737 MAX jets, grounded due to two fatal crashes, and possibly putting weaker rivals out of business.

He said he expects to receive the first 20 of the MAX jets in September and October and was “pretty confident” it would get 50 in time for summer 2021, but added there was a risk it would be fewer.

“There’s always a risk that when they restart the production line it won’t be as efficient as it was prior to the grounding and we might run into risk that we’re only able to take less than 50 aircraft, 40 aircraft for summer of 2021,” he said. “But at the moment it looks good.”

Airbus, O’Leary said, had contacted Ryanair last week offering it pre-2025 production slots that had not previously been available. O’Leary said the answer was: “Yes we would, as long as the price is right.”

“We have said despite COVID and all the other extraneous factors out there, if the price is right we will order a new Airbus aircraft and we’ll order a new Boeing aircraft, today, tomorrow, next week,” he said.

Friends of the Earth complains of carnival litter