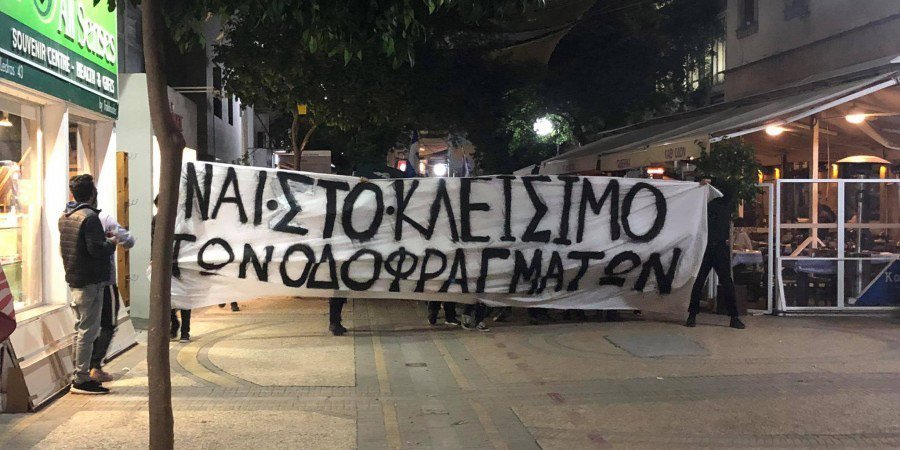 Police on Thursday confirmed two more persons were arrested and charged with participating in an illegal gathering over the closed-checkpoints’ protest in Nicosia last Saturday amidst calls that they should turn their attention instead to the march by Apoel fans on Wednesday evening over possible inflammatory speech.

In the meantime, Kato Pyrgos residents said the temporary closing of some of the crossings has made their lives very difficult.

Reaction in favour or against the temporary closing of the crossings of Nicosia’s Ledra Street, Astromeritis, Lefka and Dherynia continue with the government reiterating on Thursday that the measure is only aimed at preventing the spread of Covid-19 and nothing more.

A protest last Saturday at Ledra Street led to the arrest of a 55-year-old man who admitted to pushing a national guardsman during scuffles when some participants pushed the metal barrier into the buffer zone. Police also arrested two more persons involved in the same incident.

Police spokesman Christos Andreou said on Thursday they were charged with illegal gathering and rioting.

“Two more people have been identified and arrested,” he told state broadcaster CyBC radio. He added that they were charged and released while investigations continue.

He explained that while it is not illegal for the public to protest, it is illegal if they gather with the aim of disturbing the peace or commit this offence even if this was not their initial intention.

But many on social media argued that the protest on Wednesday by a group of Ultra 79 Apoel supporters at the Ledra Street crossing in favour of the closure of all checkpoints, should also be subject to investigation over hate speech.

The Apoel fans marched to the Ledra Street crossing holding Greek flags, and a large banner, which said: ‘Yes to closing all the checkpoints’.

The group members also chanted slogans saying: ‘hands off the national guardsmen’ in reference to Saturday’s protests when one soldier was knocked to the ground by protesters.

They also chanted ‘Turkish Cypriots are the sons of whores’, and ‘A good Turk is a dead Turk’.

Andreou said that around 250 people participated in the protest and departed peacefully at around 9pm without any problems recorded.

He said there was no sign of illegal gathering.

No mention was made over whether some of their slogans constituted hate speech.

An incensed Nicosia municipality, however, said on Thursday its crews were trying to restore the damage caused by the Apoel fans who spray-painted slogans on the finally nearly finished and so far graffiti-free Eleftheria Square during their protest.

During Wednesday night’s march by Apoel followers to the Ledra Street crossing, some supporters “apparently with their faces covered, and protected by other people found it appropriate to write messages (graffiti) on Eleftheria Square,” the municipality said on its Facebook profile.

This was despite the fact that the march itself was policed, the municipality said.

“We ‘thank’ the Apoel fans for the respect they show for their city,” the statement said sarcastically.

Among those not happy by the crossing point closures is the Kato Pyrgos community in the Tylliria area who say they rely heavily on the ones in Astromeritis and Lefka for their daily movement. Though the crossing leading to Kato Pyrgos remains open, the village’s residents mainly use the Astromeritis crossing which is closer to their area for services but to also transfer their produce through the north to the government-controlled areas.

The leader of the remote community, Nicos Cleanthous, called on the government to open at least one of the two since Kato Pyrgos residents working in the Astromeritis area are now forced to travel double the distance since they are forced to cross through Ayios Dometios.

Cleanthous also said that the Turkish Cypriot side does not allow them to bring their goods to Nicosia through the Ayios Dometios crossing. As a result, producers of fruit and vegetables and charcoal and firewood sellers are forced to commute to Nicosia through the mountain road or through Paphos which adds to their costs and hardship.

He also said that pupils who used to attend afternoon classes in Astromeritis were unable to attend because it takes too long to get there through another crossing.

Government pushed on defensive after UN ‘censure’ over checkpoint closures