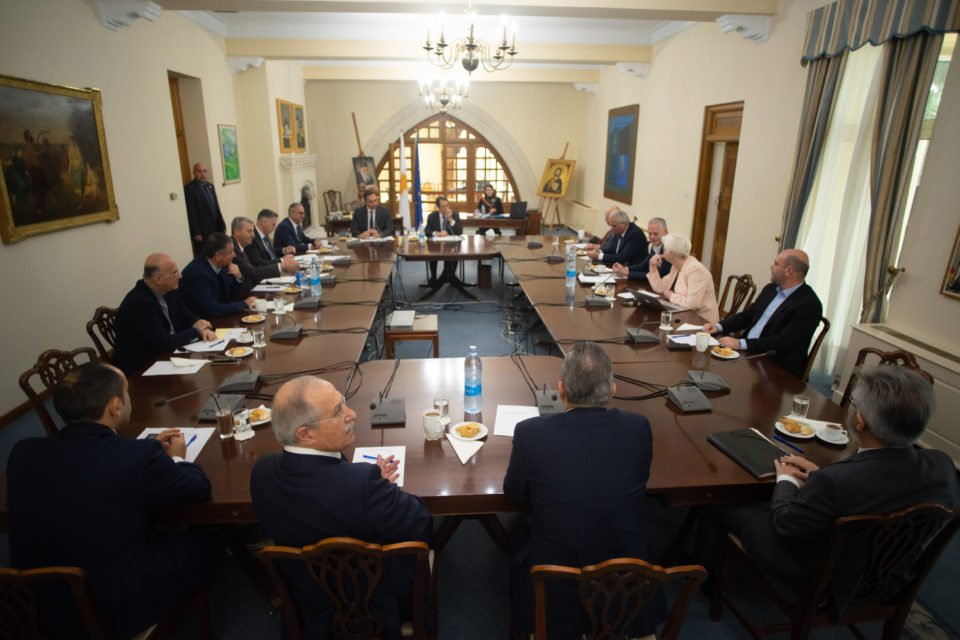 The national council meeting on Thursday

While the majority of political parties on Thursday supported the government’s move to close crossing points on the grounds of protecting the public health and not having enough staff to do so, not all were buying that as the real reason, saying the problem could have been solved with better planning.

Opposition Akel leader Andros Kyprianou in particular, who attended Thursday’s national council meeting that discussed the coronavirus measures, said there had been “an acknowledgement” that it was a political decision to suspend operations at four checkpoints.

“Today it was acknowledged at the national council meeting that it was not the [scientific] experts who suggested this,” he added.

Kyprianou who left the meeting halfway through and was replaced by a senior party official, said he had asked the question but had not received a clear answer as to when the crossings would be re-opened.

He said Akel could not accept the government’s excuse that it could not find enough medical staff to help screen people at four crossings.

“In the whole of the Republic of Cyprus, they could not find 20-30 nurses and 20-30 additional police officers to allow these crossings to operate effectively so as not to affect the health of the population?” he asked.

Ruling Disy leader Averof Neophytou said it did not get the impression that there was a political undertone to the government’s decision.

“At the same time, however, the other side’s [Turkish side’s] attitudes and efforts to politicise the issue are being noted,” he said.

“We stand by and support the government in its efforts to increase control measures for the coronavirus, whether it concerns airports, ports or crossings,” said Neophytou. “At the same time, we believe that the state should find the right number of staff needed to ensure checks are carried out.”

Diko chairman Nicolas Papadopoulos said they were informed by the health minister that the reason behind the closures was the lack of staff necessary to carry out the checks.

“If this is the reason, and what the health minister told us is true, then the government has correctly gone ahead with the closures,” he said.

“However, this is not the end of the story because a lot of questions arise regarding why there was no preparation beforehand so that these crossings were adequately staffed so that we wouldn’t be led to their closure and allow the Turkish Cypriot side to exploit this as a result, with the effects we are seeing at the moment.”

Papadopoulos said the government was to blame for this, noting that understaffing at crossing points was a long-standing issue, which not only impacted the Covid-19 checks but also illegal migration.

The three main party leaders were also asked to comment on the statement by Unficyp that appeared to subtly call out the Greek Cypriot side.

“We should be concerned that Unficyp is criticising our side for the ‘unilateral action’ the government has taken,” said Kyprianou.

He said he did not disagree with the government acting unilaterally as a matter of public health and ensuring all crossings were properly manned to deal with the virus threat.

“Where we have disagreed, and I must say that we have not received convincing answers, is on the closure of four barricades for a time period we do not know,” he said.

“I have been asked this question and I have not received a clear answer as to when the crossings will open.”

He said his criticisms of the government were firstly not having consulted the political parties before taking such a huge step as closing crossings and secondly, despite its insistence to the contrary, the government had not produced any scientific evidence that would justify closing the checkpoints.

Neophytou waved off the UN statement saying if the right number of staff was found so that the crossings could re-open, “all this will be in the past”.

Papadopoulos disagreed with the UN statement. He said the 2004 EU Green Line Regulation that is designed to facilitate trade between the two sides, stipulates that the Republic of Cyprus has the sovereignty to act as it did if the reasons are in the public interest.