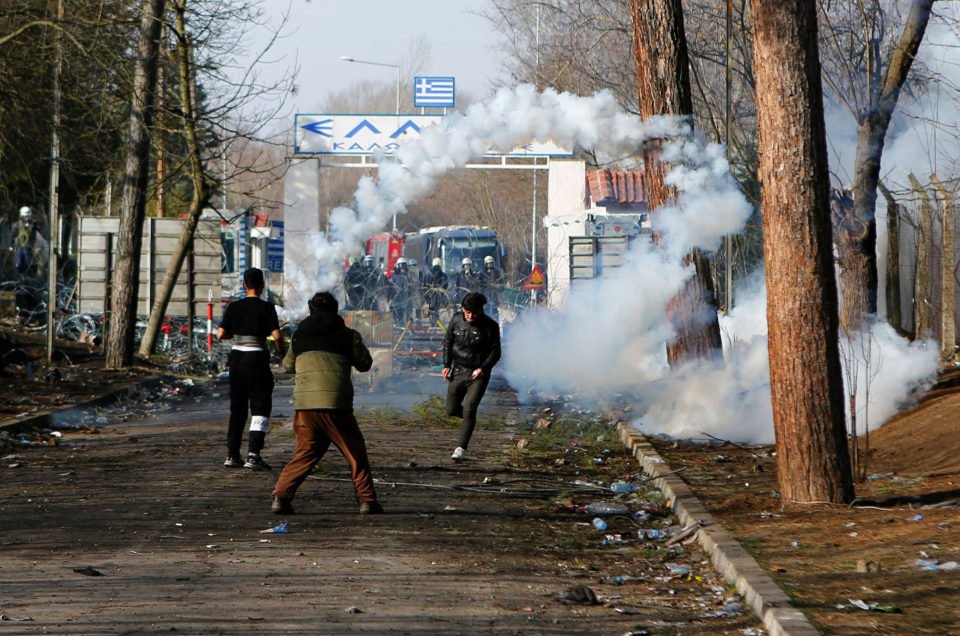 A migrant runs away from tear gas at Turkey's Pazarkule border crossing with Greece's Kastanies, near Edirne, Turkey

Things appeared to be escalating on the Greek-Turkish border yesterday as riot police from both sides fired tear gas during a new attempt by hundreds of migrants to cross into Greece amid the escalating war of words between Athens and Ankara, and the EU’s dilemma on how to solve the crisis.

Turkish President Tayyip Erdogan’s is not the sort of politician that backs down when things do not go according to his plans, especially given the rather lukewarm international response to his cynical use of migrants for his political ends.

Erdogan decided he could no longer honour the deal he had with the EU for hosting some 3.7 million refugees from Syria after the heavy military losses Turkey suffered in north-west Syria where he had planned to resettle millions of refugees.

Last Friday he lifted the controls on migrants exiting for the EU, leading to thousands arriving at the Greece-Turkey border on Saturday. The Greek government said that at least 24,000 people tried to cross its border from Turkey last weekend.

Greece came under criticism for the violent clashes witnessed between migrants and its security forces, but would any other EU member-state have acted differently? Would Hungary, Austria or Poland have welcomed 10 or 20 thousand migrants gathered at their borders? In fact, Austria’s prime minister Sebastian Kurz said his government had strengthened the country’s borders so there would be no repeat of 2015 when there was a mass influx of refugees and migrants.

In a way, Greece’s forceful approach made the EU understand that expressions of solidarity and the offer of financial aid were not enough. On Tuesday the head of the European Commission Ursula von der Leyen went to the Greek border and declared that “our first priority is to ensure order is maintained at the Greek external border, which is also a European border.” On Wednesday the High Representative of the EU Josep Borrell met Erdogan in Ankara and reportedly told him the situation at the border was unacceptable. He also said it was a useful meeting though Erdogan’s spokesman said later the EU had not made a concrete offer.

The interior ministers of EU member-states decided some measures but EU policy seems concerned about keeping Erdogan on side. This is why some countries have expressed sympathy for Turkey’s plight – another million refugees had arrived from Syria – rather than condemn its cynical treatment of the migrants and refugees.

That Borrell was in Ankara indicates that attempts are being made to reason with Erdogan and find an acceptable arrangement regarding the refugees. What it will be is difficult to say, but Greece should remain steadfast in its position, regardless of the criticism from international agencies such as the UN and the Council of Europe.

Cyprus improving its AML framework but risks remain, US says