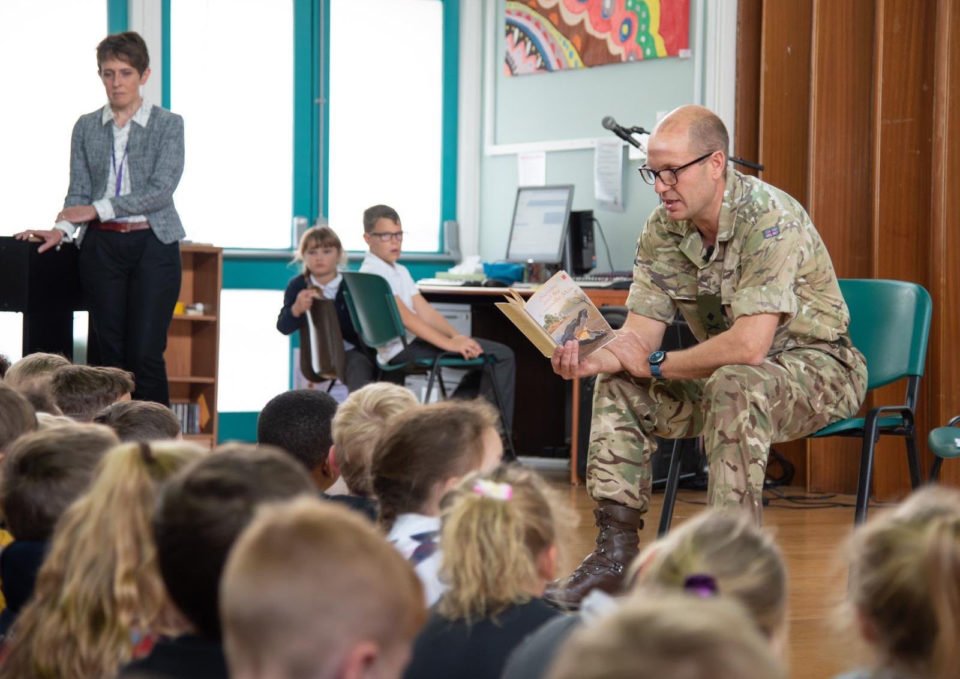 Commander British Forces Cyprus, Major General Rob Thomson, a passionate reader and father of five, explained why he feels so strongly about reading and why he feels it is essential at every stage of life

Commander British Forces Cyprus, Major General Rob Thomson, visited Episkopi Primary School on February 27 to discuss the importance of reading with the children and to launch a new literacy initiative for all the schools in the Bases.

Maj Gen Thomson, a passionate reader and father of five, also revealed some of the books that he loves reading with his family.
During the school assembly, he explained why he feels so strongly about reading and why he feels it is essential at every stage of life.

After reading a chapter from ‘Akimbo and the Crocodiles’ by Alexander McCall Smith, a book he read to each of his children, he then took questions from his eager audience.

Bases schools have advanced levels of literacy when compared to their UK counterparts, with up to 90 per cent working to the expected standard for six to seven-year olds – 14 per cent higher than the UK average.
That statistic rises even higher for 10 to 11-year olds, with 100 per cent of children hitting the target.

After sitting down with four, Year 6 students in the school’s library to discuss their favourite books, Maj Gen Thomson explained why he wanted to talk about reading at the school.

He said: “Reading is the foundation of literacy. If you read, you learn to write and you learn to spell and punctuate and understand grammar but reading is also a lot of fun.

“You could see the passion of the children when they talked to me about their favourite books because they take you into your own imagination, they take you into your dreams, they help you understand people. I think it is really important that we continue to invest in reading for all of us, as children and grown-ups.”
He was then quick to pay tribute to the teachers at the schools across BFC, saying: “We are a big community and we have a lot of people, with six schools, and it was really important for me to invest my time here.

“The teachers are doing incredible work, they are brilliant schools and have great ratings through Ofsted. The reading age is in advance of the average in the UK and I, by coming, wanted to show how valuable their contribution is to our community here on Cyprus.”

In discussing his book list and narrative competition, CBF said: “Often, senior officers have a reading list and I do have one of my own, listing books which have shaped me as an officer and as an individual. So we sat down as a family at Christmas and came up with the idea of creating a reading list where we could share our ideas with families here on the island.”

CBF also announced plans to hold a narrative writing competition for children across all BFC schools.

He said: “For the narrative competition, which launched yesterday, on World Book Day, we ask children to write a story – it is a chance for them to take inspiration from what they have read elsewhere and use it to inspire their own stories.”

For the children themselves, getting the chance to share their thoughts and feelings about reading with CBF was clearly an opportunity they relished.
Freya Collinge, a Year 6 student who was reading ‘Murder Most Unladylike’, said: “For me, books take you into a different world, where there is always something new and exciting around the corner.

“I enjoyed talking to CBF about my favourite book and he has suggested some that I might enjoy reading too.”

Hayden Collo from Year 6, is a fan of action books, and he said: “The character in my favourite book is brave both mentally and physically and I talked to CBF about why it is important to have characters like that, because they give you something to look up to.”