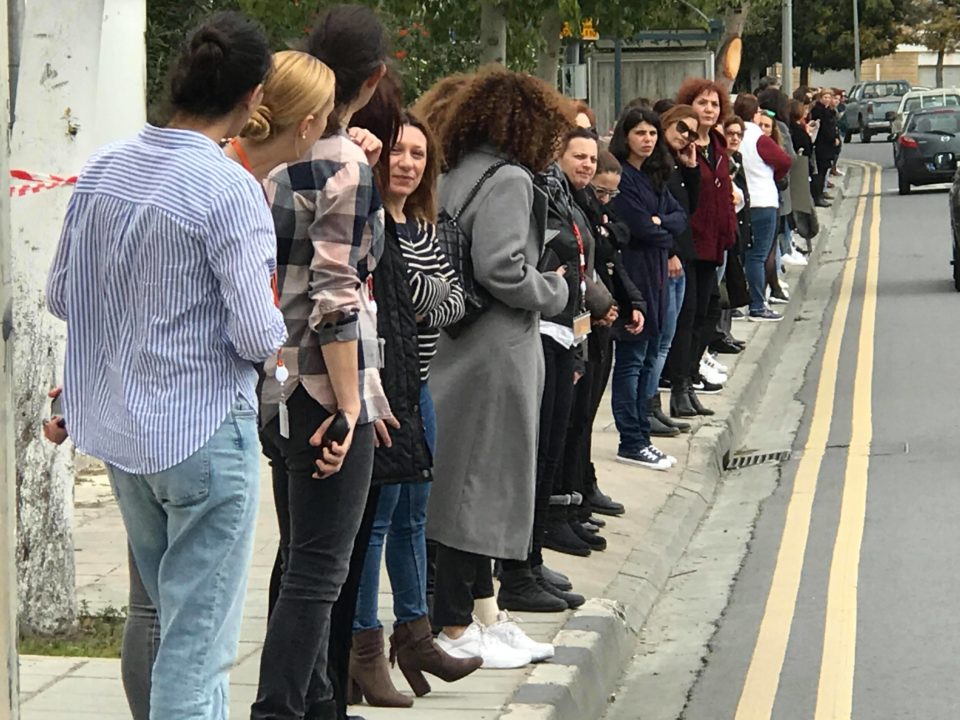 Thousands of women across Cyprus gathered outside their workplaces on Friday for a one-hour work stoppage calling for gender equality.

The work stoppage followed a call by the Einai I Ora (The Time Is Now) initiative created to promote women’s rights.

Women were urged to form human chains across the island for gender equality and to protest against domestic violence as part of the events organised ahead of Women’s Day on Sunday (March 8).

Responding to the call, women working in both the public and private sectors, stepped outside their office buildings, banks, shops and restaurants, some forming chains, others standing in groups.

The call to all women in Cyprus concerned abstention from their duties between 11am and 12pm, whether at their workplaces or homes, “to highlight their presence through their absence.”

Initially, some small groups were hesitant but after seeing others standing outside more would join in.

The move is aimed at claiming an end to violence, equality in decision-making centres, zero tolerance to sexism, discrimination and gender stereotypes, for laws and structures for protection and support, for securing our rights, for respect.

“I speak for all cleaning staff across Cyprus, we don’t want our pay scale to be fixed, but evolve like that of the administrative staff, to be able to get something when we retire,” said Soula Polykarpou who works for the civil service.

Another protester, who works in the private sector, said she was participating to claim better representation of women in decision-making centres.

Some men were also seen joining their female colleagues.

The office of the UN High Commissioner for Refugees in Cyprus also participated in the event, saying it is time “for better protection of refugee women.”

Police also announced they were backing the initiative with their female personnel joining in the work stoppage. The force also said that they “stand by the side of all women, they respect and actively support their rights in every way.”

Civil servants too, were given permission to join if they wished to.

Some MPs, men and women, joined the parliament’s female employees to form a human chain which passed from the ministries of interior and finance and stretched towards the Presidential Palace.

President Nicos Anastasiades has expressed its intention to continue the effort for more women to participate in decision making centres.
During statements at the presidential palace, on the occasion of the one-hour strike he expressed the “admiration, the appreciation but also the gratitude of the state for women’s contribution to the social, political and cultural action.”
He also gave examples of the recognition by the government of the importance of women, pointing out that two women, the minister of labour and the deputy minister of shipping, are members of the Cabinet and that he has named a woman for the role of European Commissioner on behalf of Cyprus. Over half of Commissioners in Cyprus are women, he said, while 34 per cent of semi-government organisations’ presidents are women.

Anastasiades assured women that “as equal partners we will continue to make sure that the state’s policies contribute to the substantial equality between men and women.”
Former Foreign Minister Erato Kozakou Markoullis, however, said that Cyprus still lags on gender equality issues both at European and international levels.

“It is time to wake up and revolt to change this situation. I am ashamed by the level of our country on equality issues,” Markoullis told the Cyprus News Agency.

Former Law Commissioner and Children’s Rights Commissioner, Leda Koursoumba, said that it is about time to realise that equality is not just about women. “It is a matter of respecting a person’s dignity regardless gender.”

She added that it was the duty of the state and of society not to tolerate violence and discrimination, especially against women.