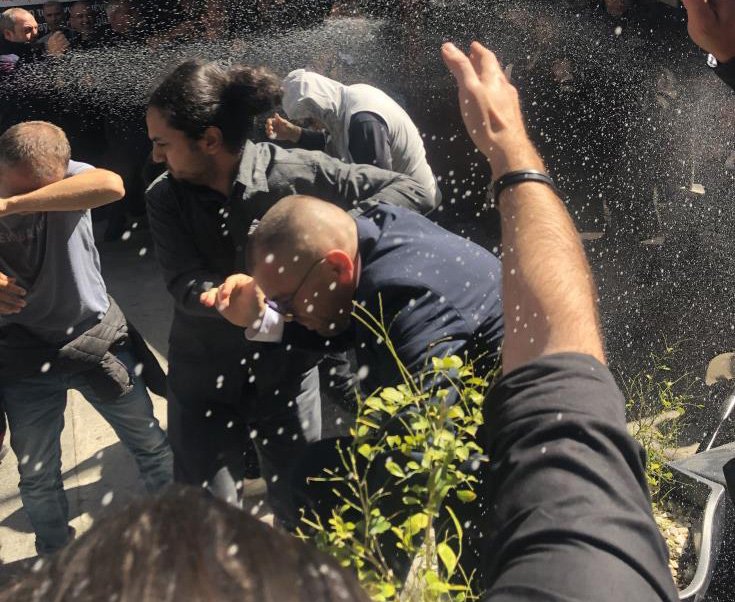 Demonstrators duck as they are sprayed by police on Saturday

Police on Saturday said they were forced to use defensive spray against a large group of protesters from northern Nicosia who tried to push through to the closed Ledra Street checkpoint to the government-controlled areas.

According to the police, four officers were injured when more than 100 people who had got through the narrow UN buffer zone and managed to break the initial line formed by members of the UN peacekeeping force.

Police added that stones were thrown at the officers who were trying to prevent the Turkish Cypriot protesters crossing over to the government-controlled areas.

“During the scuffles there was a limited use of personal teargas spray by some of the officers, in their effort to prevent the protesters break the police line and by extension the crossing, which remains temporarily closed,” police said in a written statement.

It added that one of the officers was taken to hospital after being hit by one of the protesters with a metal sign.

In one video sent by a demonstrator a police officer is seen being affected by the spray his colleague used.

Video sent by one of the demonstrators.

Around 200 protesters had gathered at the crossing from the Greek Cypriot side and around 150 from the north.

Turkish Cypriot leader Mustafa Akinci condemned the use of the spray.

In a social media post, he said that to the people who support the opening of the crossing, an olive branch should be extended and not be gassed with sprays. He added that it was a disproportionate use of force.

His condemnation was echoed by protesters who said the police action had not been necessary. Video footage showed police also hitting people in the first row with batons.

According to media in the north, some Turkish Cypriot protesters and journalists were injured and taken to hospital.

Unite Cyprus Now, which is one of the co-organisers of the protest, tweeted that while they and other organisations had agreed not to push through the barrier and to hold a peaceful protest, some did go ahead.

Protesters shouted slogans such as “Open the street, let the people through” and “United, federal Cyprus”.

Another protest is to take place at the same crossing on Monday at 11am.

Unficyp spokesperson Aleem Siddique told the Cyprus Mail on Saturday that the peacekeeping force will now step up their presence at that location in response to the recent demonstrations.

“We are coordinating closely with both sides to address the situation on the ground,” Siddique said.

But another UN source told the Cyprus Mail stressed that the force can’t arrest anybody and relies on cooperation from both sides to keep the peace.

The same source said they had asked the Turkish Cypriot police not to allow people through their side of the crossing given that the Greek Cypriot side has closed theirs, but their request was not heard. Protesters were also asked by the Unficyp personnel on site not to march towards the other side but they pushed their way all the way to the front where the Greek Cypriot police officers were.

If either side refuses to cooperate with Unficyp, it is pretty clear why the situation can deteriorate, the same source said.

By early Saturday afternoon, the Ledra street checkpoint was calm and quiet.

This is the second such protest taking place for the second Saturday in the row after the cabinet’s decision last week to suspend the operation of the Ledra Street, Astromeritis, Lefka and Dherynia crossings for seven days. The government announced on Thursday the measure would be extended until Monday.

Security had been beefed up since last week’s scuffles. The checkpoint is now blocked off by two lines of metal barriers, chained together.

Last week’s protest was also marred by scuffles after some protesters on the Greek Cypriot side pushed the barrier erected at the crossing. Three persons were arrested over that incident, one of them for pushing a national guardsman. The other two they were charged with participation in illegal gathering and riot.

In the meantime, another protest took place at Ledra Street om Friday evening from a group calling for the closing of all crossings. The group, that said they were a non-partisan initiative, headed by far-right Elam, marched to the Ledra Street crossing holding Greek flags and called for all crossing points to close.

Elam leader Christos Christou said in his address that they would like all the crossings to close. “We want to protect our compatriots from the calamities Turkey has in store for us,” Christou said.

Earlier in the week, a group of Apoel fans also marched to the same crossing also calling for the closing of all crossing points

The videos below indicate the sequence of events. The one from Politis shows Greek Cypriot police attempting to stop protesters from the north who had crossed through the buffer zone to enter the Greek Cypriot crossing point. The Yeni Duzen video shows the situation from northern Nicosia as police used spray.

Posted by yeniduzen on Saturday, 7 March 2020

Delving into the subconscious of a rejectionist president