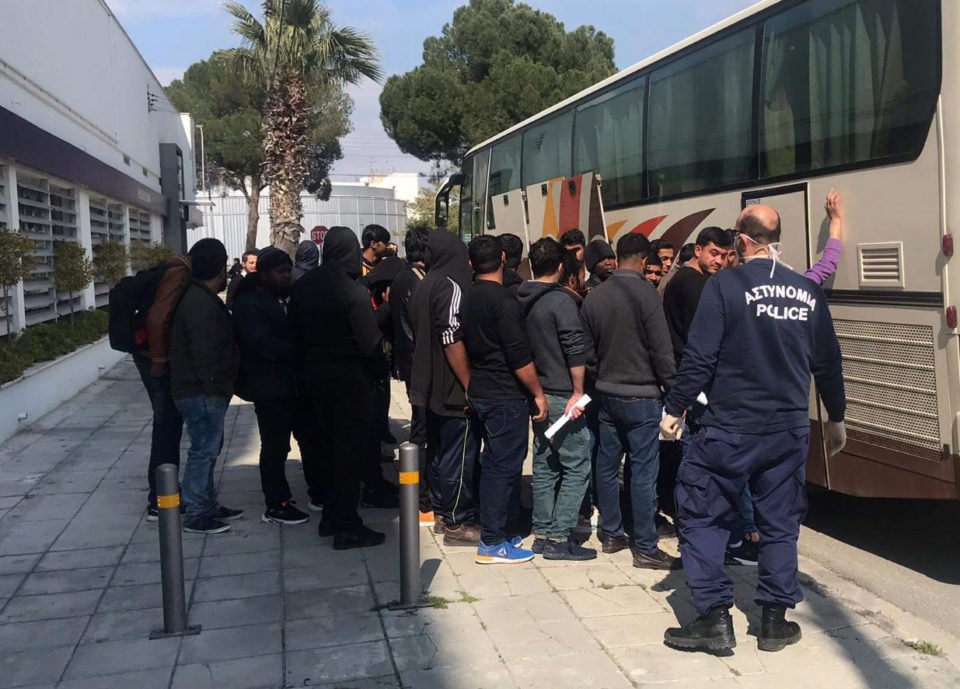 Migrants applying for asylum in Cyprus earlier this week

The continued division of the island has played a key role in Cyprus’ spiralling migrant crisis which has only been exacerbated by this week’s stand-off between Turkey and the EU, a top government official has told the Sunday Mail.

He said that the failure to find a solution explains the limp EU response to the government’s calls for help in recent years.

“The Europeans (EU) don’t care. They don’t give a damn. Since it’s the Cyprus problem that’s at fault,” he said. “It’s possible migration becomes a crucial part of the talks towards some kind of solution.”

According to the government official, who spoke on condition of anonymity, there is not much sympathy in the EU for the Republic as most irregular migrants and asylum seekers entering are coming from the north. Some in the EU, he said, perceive this as having been entirely avoidable – had the Greek Cypriots made greater efforts towards a solution.

Between 2015 and 2019 migration flows increased 320 per cent while migrants, refugees and asylum seekers now account for 3.8 per cent of the population, according to the latest figures by the Interior Minister Nicos Nouris. The total number of asylum seekers, including the 12,000 people that were granted international protection, stand at about 32,000. Pending asylum applications stand at about 17,000 with some 4,000 pending appeals.

And those figures were from before Cyprus got caught up in the geopolitical storm as Turkey lashes out at the EU over a lack of support for its military action in Syria and its hosting of millions of migrants and refugees.

This has led to the stand-off between Greece and Turkey as Turkey ended its 2016 deal with the EU and allowed thousands of migrants and asylum seekers to mass on Greece’s northern border, seeking entry into the EU. Greece says it has stopped 35,000 people entering the country illegally in the last week.

The impact on Cyprus is evident. Nouris said this week over 300 irregular migrants had arrived in recent days, with figures changing daily.

And while the international discussion and camera lenses are focused on the Greek border, Cyprus has topped the EU charts in terms of asylum claims relative to its population for three years in a row.

According to the UNHCR, the top ten countries of origin for new asylum seekers in Cyprus as of November 2019 are Georgia, India, Bangladesh, Syria, Pakistan, Cameroon, Vietnam, Egypt, Sri Lanka and Nigeria.

This unprecedented change is brand new to Cyprus, which largely avoided the initial impact of the 2015-16 migrant crisis.

The government has said it is now “one of the biggest issues the Republic has ever faced”.

“The new trend in the last two years is that two thirds come illegally from the north,” said the government official. “They are entering from illegal crossings.”

Human traffickers exploit Cyprus’ unique political history and the complexities therein. Namely, the 180km long buffer zone – which is not a border – and loopholes regarding student visas via the north.

“Even if people have crossed over illegally through the buffer zone, and end up in say Athienou and authorities see them, they just say they are asylum seekers,” the official said.

Late last year, reports emerged that the UNHCR was assisting migrants in crossing illegally from the north to the Republic. It is understood that UN-affiliated NGOs in the north pick up migrants and take them to the buffer zone and help them cross.

“Yes, we work in the north,” Strovolidou said. “There is no return to the north because there is only one republic in Cyprus. Most asylum seekers that find themselves in the north make their way to the Republic.”

When asked why the UNHCR helps migrants and asylum seekers cross over the buffer zone, Strovolidou said that: “this is in accordance with the cornerstone principle of non-refoulment that calls upon states to ensure that people in international protection are not returned to danger.”

But the government official accused the UNHCR of facilitating illegal migration and helping human traffickers.

“In Tymbou [Ercan airport], they were bringing them over to the south with cars.”

Aleem Siddique, Unficyp spokesman, also confirmed to the Sunday Mail that in “some cases” the UN peace-keeping soldiers will also help migrants cross to the south – if they are found in the buffer zone.

They are taken to the Greek Cypriot authorities instead of returning them to the north, he said.

“What the regulations say is that the Republic is the host government which gives us (the UN) our agreement, giving us the permission to operate on the island. They are our primary interlocutor,” said Siddique.

“The UN does not recognise the so-called TRNC. The competent authorities for us (the UN) are in the Republic of Cyprus. The Republic is the signatory to the refugee convention, the Republic is a member state of the UN, the UNHCR is a legally mandated body that has an island wide mandate,” Siddique said.

The UN of course strongly condemns human smugglers, as the international organisation speaks out on the many dangers. These include extortion, rape and other physical abuses.

However critics say that the UN and NGOs facilitate illegal immigration, either directly, or by incentivising people to make the dangerous journeys – knowing they will be “picked up” along the way.

That argument aside, the issue remains as to how exactly migrants end up in Cyprus in the first place.

There are three main sources: those originating from the Middle East, Asia and Africa. For all three, their favoured method of entry into the Republic to claim asylum is via the north.

“The Africans come as students in the north. Turkish Airlines flies from all over: Cameroon, Nigeria, Congo and other countries,” the government official said.

In December, the Sunday Mail spoke to dozens of foreign students, migrants, asylum seekers and refugees.

Many explained that in their countries of origin, such as Cameroon, there is a very simple process of paying traffickers about 4,000-5,000 euros to enroll them in universities in the north and sorting out the necessary paperwork.

“I crossed at night,” an asylum seeker in downtown Nicosia said. “There are experts that cross you from the north to the south.”

Another said: “I took a plane from my country (Congo) to Turkey. From Turkey I came to north Cyprus and then crossed here on foot.”

While this process is now well known, the government official provided further details. “I know that in Cameroon, Cyprus is being advertised as a migration destination. They are told of cheap flights to Turkey, a three-day visa because it’s only transit, and then in Cyprus they are told how they’ll get sorted out to get to the south.”

When asked whether Cyprus itself is a transit point or a destination, he said: “Of course we are a destination, where else will they go? There’s no way off the island for them. This trend will only increase.

“Cyprus is the only destination in the EU for people in African countries. Out of the hundreds of millions there, if only one out of every few hundred come to Cyprus – you can imagine the situation.”

But proponents of greater freedom of movement say Cyprus should do more to help out.

“If you look at places like Jordan and Turkey compared to Cyprus, we do not have so many here,” Strovolidou told the Sunday Mail.

“UNHCR believes that the situation regarding the management of the refugees and asylum-seekers is manageable,” Strovolidou said.

Although many are Turkish citizens and Turkish Cypriots, 40 per cent of the population in the north are students.

“There are many legitimate students in the north, but some have to claim asylum in the south,” she said.

“Many of them are not safe in the north and face exploitation and abuse.”

There is immense pressure on the government from the EU, the UN, NGOs and activists to take better care of those coming to Cyprus.

The government official’s response was blunt.

“It’s a crisis. We don’t even have a place to put them, supposedly something will be done. But even if we build more centres – how many more? There’s 1,200 people coming a month – what – we build one centre a month, that still wouldn’t be enough.”

Last week the government said it will ready a plan of action by early next week to tackle the growing influx of migrants, while the government has asked the European Union for greater support.

On Friday, President Nicos Anastasiades said that measures must be taken to address these issues, while taking into consideration international and EU law. He has sought the advice of the attorney-general over the legality of any measures

Nouris said Cyprus has reached its limits in terms of economic migrants, and their vast number was taking away much-needed resources from refugees from war-torn countries such as Syria.

Strovolidou also told the Sunday Mail that “admittedly not all of them are in need of international protection”.

The government official also highlighted an example of why it is difficult for Cyprus to be taken seriously when it asks for help to stem illegal immigration.

He points out that for decades, private universities in the Republic have been complicit in effectively setting up “sham education centres” which bring people in on student visas, mainly from Asia, in the full knowledge that they will then go on to claim asylum.

They are “traitors”, he said.

Repatriation of some of the migrants is fraught with difficulties, the government official explained.

If the government wishes to repatriate certain migrants and refugees, such as Syrians, “then we will have to open an embassy in Syria – whether we like it or not – Assad’s government is in control there.”

But he said that many Syrians now coming to Cyprus are not from the war-torn north-western region of Idlib, but are from territories where the fighting has stopped.

“We should also stop perceiving all Syrians as a group of refugees – there are nuances and we are not alone in thinking this. The Swedes and others are also looking into this.”

The Africans, “are here to stay”, he said. “They ‘lose’ their papers and then if we ask their country to take them back, their country refuses – saying ‘oh who is this guy? We don’t know him’.”

In 2015 Cyprus was largely bypassed by the thousands entering Europe despite its proximity to the war in Syria. Its isolated island status made it unattractive to those seeking mainland Europe. At the time, the two main points of entry into EU member states was from Turkey to Greece, and from north Africa to Italy or Spain.

But as other EU countries stepped up efforts to limit migratory flows, Cyprus’ division exposed vulnerable loopholes – creating the crisis we see today.

Our View: President has finally decided we have a migrant problem