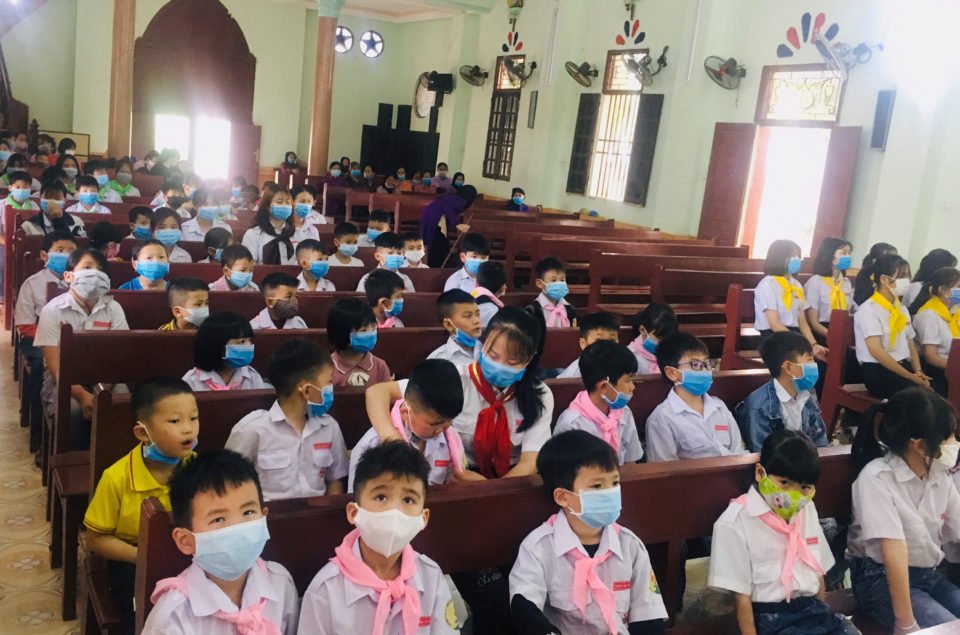 Children wear protective masks while attending a Sunday mass at a Catholic Church in Son Loi commune, an area quarantined due to the novel coronavirus, in Vinh Phuc province, Vietnam February 23, 2020.

Here’s what you need to know about the coronavirus:

There are now more than 106,000 coronavirus cases and more than 3,600 deaths across the world, according to a Reuters tally of government announcements.

Italy ordered a virtual lockdown across a swathe of its wealthy north on Sunday, including the financial capital Milan, in a drastic attempt to try to contain the outbreak there.

The government enacted its draft order just hours after officials announced that the number of coronavirus cases had leapt by more than 1,200 in a 24-hour period – the biggest daily rise since the epidemic began in the country two weeks ago.

Iran, one of the other worst hit countries outside China, said 194 people had died from coronavirus and 6,566 were now infected.

Meanwhile, the mayor of Daegu, the city hardest hit by South Korea’s outbreak expressed cautious hope on Sunday that the numbers of new cases may be dropping, after the rate of increase slowed to its lowest in 10 days.

Keep calm and work from home

The European Central Bank has told most of its over 3500 staff to work from home on Monday to test how it could cope with a shutdown – one of a slew of institutions and companies urging staff to avoid the office and curb travel plans.

After being held at sea and barred from returning to San Francisco last week due to a coronavirus outbreak aboard, the cruise ship Grand Princess has been directed to the nearby port of Oakland, the cruise line said on Saturday. Passengers needing treatment will be transported to facilities in California. The crew will be quarantined and treated on board.

The Bahrain Formula One Grand Prix will go ahead on March 22 but without fans cheering on the drivers, in a first for the sport. The Chinese Grand Prix in Shanghai scheduled for April 19 has already been postponed.

Britain has called a meeting with its sports authorities and broadcasters on Monday to discuss how other events could be staged without fans present if the outbreak escalates.

What about walking the dog?

Moscow’s healthcare department said it was OK for residents in self-isolation to walk their dog, but only while wearing a face mask and at time when there are the fewest people in the streets. The advice was handed out after authorities threatened prison terms of up to five years for people failing to self-isolate for two weeks after visiting countries hit hard by the coronavirus outbreak.

For an interactive graphic of the spread, open https://tmsnrt.rs/3aIRuz7 in an external browser.

China says it will hit back against new U.S. sanctions over Uighur rights