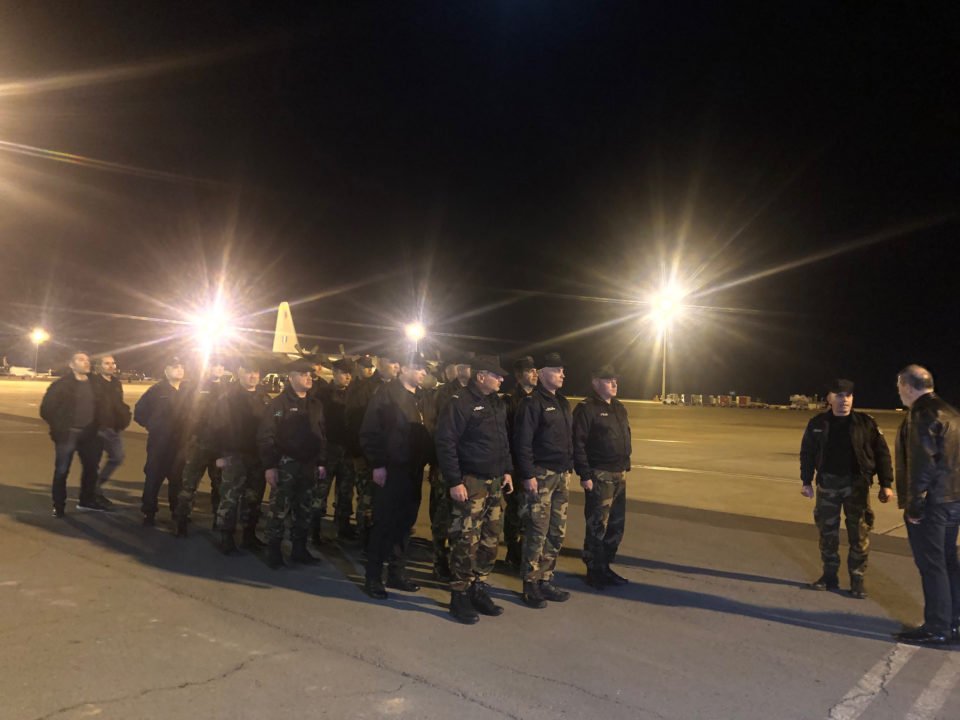 Cyprus has deployed 22 members of its special forces to the Greek area of Evros, on the border with Turkey, to assist local forces who are facing another wave of undocumented migrants trying to enter the country.

Around 17 members of the Emergency Response Unit and five immigration unit officers departed aboard a C-130 military aircraft from Larnaca airport to Alexandroupolis all wearing their anti-riot uniforms.

Justice Minister Giorgos Savvides met the group at the airport before their departure. He said that President Nicos Anastasiades ordered the dispatch of the officers after talks with Greek Prime Minister Kyriakos Mitsotakis made it clear that there is need for additional help to contain the situation on the Greek-Turkish border.

Savvides said he was proud of the members of the police for their willingness to take part in the mission with such short notice.

The justice minister also said he was in constant touch with his Greek counterpart, Michalis Chrysochoides, to discuss the details of the operation, specifically what tasks the officers would undertake during their mission, specifying that “the officers would be stationed in Greece for as long as it takes to carry out their duties.”

“Cyprus is also facing the problem of irregular migration,” he said.”

“The percentage of irregular migrants stands at 3.8 per cent of the total population and we hope that we will get the support we anticipate from all European countries.”

Government spokesman Kyriacos Kousios confirmed on Sunday that Anastasiades and Mitsotakis had a long telephone conversation last week, where they discussed the latest developments regarding the migrant issue and Turkey’s policy on the issue, as well as the situation at the borders between Greece and Turkey and the growing influx of migrants to Cyprus.

“President Anastasiades informed Prime Minister Mitsotakis that, by deploying special forces, Cyprus is showing that is ready to protect Greece’s borders, which are also Europe’s borders.”

In the meantime, Elam said it on Monday it too had decided to send a delegation of party member volunteers, headed by MP Linos Papagiannis, to Evros to help out local operations at the border.

“Hellenism is being tested by the war declared by Turkey,” an announcement published by the party said.

“They are sending thousands of illegal migrants to Greece, where the police, the army and many concerned citizens are trying to prevent the country from turning into an Islamic province.

“The war declared by Turkey to Greece concerns Cyprus too,” the statement concluded.

Tens of thousands of migrants have been trying to get into Greece since Turkey said on February 28 that it would no longer try to keep them on its territory, as agreed in 2016 with the EU in return for €6bn in financial aid to help the country finance housing, schools and medical centres for the refugees.

Turkey hosts about 3.6m war refugees from Syria, where its troops and allied rebel forces are battling Russian-backed government forces.

Erdogan said the EU has failed to honour promises made to Ankara.

“We were hoping to get much more support from the international community when it comes to refugees, it’s clear it hasn’t happened, as we only received half of the sum promised so far,” he said during a speech in Istanbul on Sunday.

The Turkish President will meet with EU officials, including Charles Michel, who chairs summits of EU leaders, and Ursula von der Leyen, president of the EU’s executive Commission, in Brussels on Monday to discuss the current situation.

At the same time, Mitsotakis will meet German Chancellor Angela Merkel in Berlin, where he will seek the EU’s backing to Greece.

The meeting between the two leaders is expected to focus on the common European asylum policy currently in the making and press for a fairer distribution of the burden across the EU.

PSG vs Borussia Dortmund to take place behind closed doors

Fengaros Music Village all set for 2020