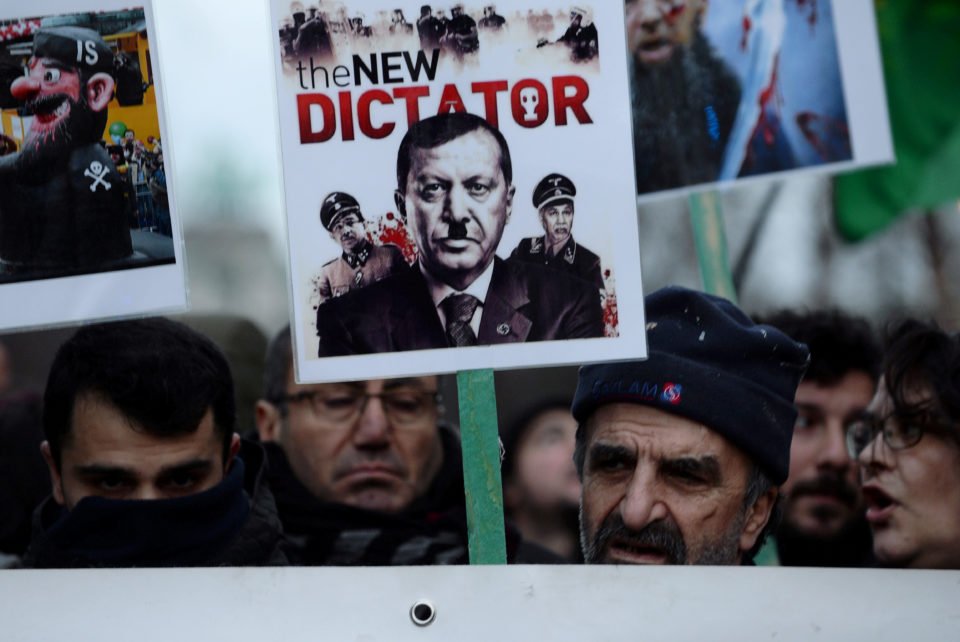 A protester holds a banner depicting Turkish President Tayyip Erdogan during a demonstration against a visit of the president, near Schuman square in Brussels, Belgium March 9, 2020. REUTERS/Johanna Geron

Turkish President Tayyip Erdogan sought more European support on Monday over the war in Syria and for hosting millions of refugees, but was told he must first stop encouraging migrants to cross into Greece.

Erdogan flew to Brussels for talks with the European Union and NATO after tension rose over the fate of tens of thousands of migrants trying to enter EU-member Greece since Ankara said last month it would no longer try to keep them on Turkish soil.

Turkey hosts about 3.6 million refugees from Syria and has kept a lid on migration to Europe under a deal it agreed with the bloc in 2016 in return for billions of euros in aid.

But it has become frustrated with what it regards as too little European support over the war in Syria, where its troops are facing off against Russian-backed government forces and have suffered growing casualties.

“The crisis stemming from Syria, with its security and humanitarian aspects, is threatening our region and even all of Europe,” Erdogan said after arriving for talks with the EU and NATO. “No European country has the luxury to remain indifferent.”

“We expect concrete support from all our allies in the fight that Turkey has been carrying out alone… NATO is in a critical period during which it needs to clearly show support.”

The EU has little to offer in terms of military support in Syria, where it has condemned Turkey‘s engagement. The 27-nation bloc, in which most members are also Ankara’s NATO allies, has dangled the promise of further aid – but in time and under conditions.

“The events at the Greek-Turkish border clearly point to politically motivated pressure on the EU‘s external border,” the head of the European Commission, Ursula von der Leyen, said before talks with Erdogan. “Finding a solution to this situation will require relieving the pressure that is put on the border.”

At the same time, the EU is trying to support Greece, where it says some 42,000 refugees and migrants are stuck on the islands, including about 5,500 unaccompanied children.

France, Portugal, Finland, Germany and Luxembourg offered to take some in, with Berlin saying up to 1,500 minors could move in total. EU migration ministers are due to discuss the matter in Brussels on Friday.

The EU is determined to avoid any repeat of 2015 and 2016, when more than a million people, mostly from the Middle East, reached its shores via Turkey and Greece. That was all but halted by the 2016 Turkey deal, which the EU hopes to salvage.

The EU says it has so far paid about half of a promised 6 billion euros to help Turkey finance housing, schools and medical centres for the refugees stranded on its territory.

“A precondition for any additional EU help should be to stop all support to illegal border crossings and move people away from the border,” a German conservative member of the European Parliament, Manfred Weber, said.

The 2016 pact had also envisaged the EU taking in thousands of Syrian refugees directly from camps in Turkey, rewarding Turks with visa-free travel to the bloc, faster progress in EU membership talks and upgrading their customs union.

But ties between the two soured following a botched coup against Erdogan in July 2016. The EU was taken aback by the scale of Erdogan’s post-coup crackdown on critics and has effectively frozen Turkey‘s long-stalled bid to join the bloc.

“We expressed very clearly to President Erdogan our commitment to move forward on these issues, provided that it is reciprocal,” von der Leyen said after about 40 minutes of talks.

NATO head Jens Stoltenberg told a meeting with Erdogan that the alliance has already invested more than $5 billion in Turkey, including in military bases and radar sites.

Government to submit supplementary budget for approval in next few days