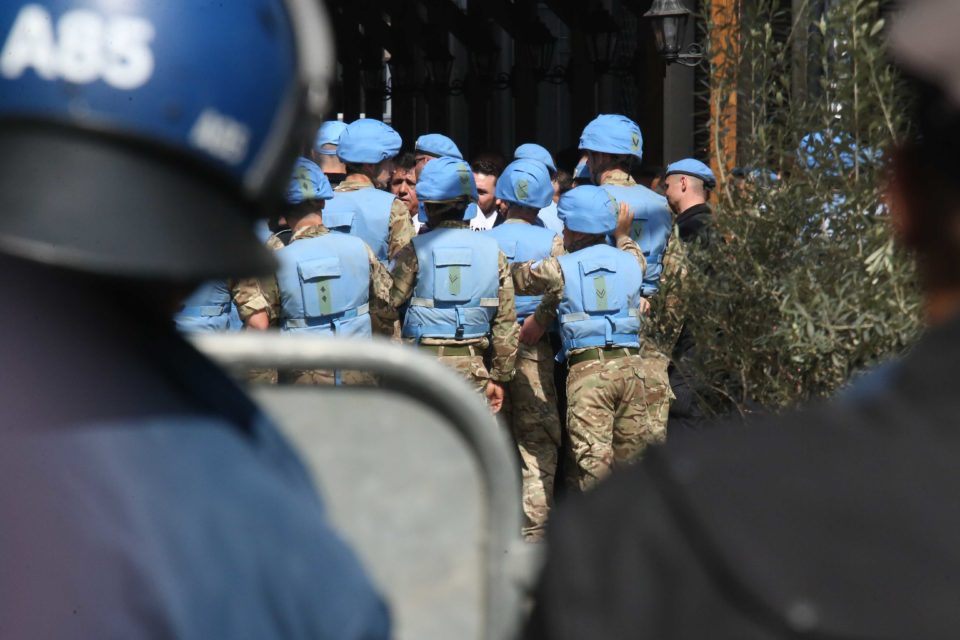 A new protest against the closing of the crossing points was held Monday morning at Nicosia’s Ledra Street crossing, with a beefed-up Unficyp presence, as the government announced it would remain closed another day.

Unficyp were out in greater force on Monday after Greek Cypriot police on Saturday used teargas on Turkish Cypriot demonstrators when some of them tried to break through the police line and reach the barriers temporarily installed at the Ledra Street crossing.

This was the third protest organised against President Nicos Anastasiades’ decision to close four of the seven crossing points to the north in what he says is a precautionary measure against the spread of the new coronavirus.

The protesters gathered on the north side of the Ledra St crossing were chanting ‘Peace in Cyprus cannot be hindered’ holding red carnations. They wanted to pass them to the police on the south side of the crossing. Unficyp agreed to allow a five-member delegation to pass and deliver the flowers to the Greek Cypriot police but the demonstrators refused saying they all wanted to go. They said they would return on Tuesday.

Some of them remained there in a sitting protest reportedly saying they would not leave until the UN allows them to enter the buffer zone.

They had also invited Turkish Cypriot Leader Mustafa Akinci to join but he did not come.

The demonstration was organised by various groups such as trade unions and small parties.

After the UN personnel refused to let them pass, they booed them and shouted: “Shame on you”, and “UN forces out of Cyprus”.

Organisers said their aim was a peaceful, symbolic protest for the opening of the crossings.

Head of the Turkish Cypriot press workers’ union Basin-Sen, Ali Kismir, said they had brought flowers to convey a message of peace and friendship.

“All we want today is deliver these flowers to police officers and request that the decision on the closing of the crossings to be lifted,” Kismir said.

The demo lasted about an hour with some taking part in a sit-down protest.

Prior to the demonstration Turkish Cypriot police officers had pushed back Unficyp staff that had formed a line arguing they were in the north side and not the buffer zone.

Unficyp earlier in the day called on protesters to refrain from any action along the buffer zone that might disturb public order.

In the face of new protests being organised, Unficyp spokesman Aleem Siddique said public safety was the peacekeeping force’s priority, according to CNA.

“We call on all demonstrators to refrain from any actions that disrupt public order,” Siddique added.

He said Unficyp had strengthened its presence on the ground and was “coordinating its actions closely with both sides to maintain peace”.

The announcement came after the government said that  crossings at Ledra Street, Astromeritis, Lefka and Dherynia would remain closed for one more day pending the cabinet’s decision on Tuesday on how the issue will be handled.

According to an official announcement, the ministerial committee appointed by the cabinet to manage the crisis caused by the spread of coronavirus decided on Monday for the four crossings to remain closed until Tuesday.

The cabinet will convene on Tuesday to discuss the matter.

Government spokesman Kyriacos Koushios reiterated on Monday that the temporary closure of crossings was solely a preventive measure for the coronavirus, stressing that there was absolutely no connection with the migrant issue. Speaking to state broadcaster CyBC, he also expressed regret that this has been turned into a major political issue and described the divisive climate created as “unacceptable”.

Koushios also criticised authorities in the north for facilitating foreign nationals to cross to the south, stressing that the government must take action. He also questioned the decision by the  Turkish Cypriot side not to send samples for suspected cases of coronavirus to the bi-communal Institute of Genetics and Neurology and sends them to Turkey instead.

The cabinet’s decision some 10 days ago to suspend the operation of the four crossings as part of measures to prevent the spread of the coronavirus provoked reactions in both communities.

Police chief Kypros Michaelides has condemned the incident and the attacks against the officers on duty by Turkish Cypriot protesters and said he had given orders for the incident to be investigated. Anyone found to have committed any offence will be prosecuted, he said.